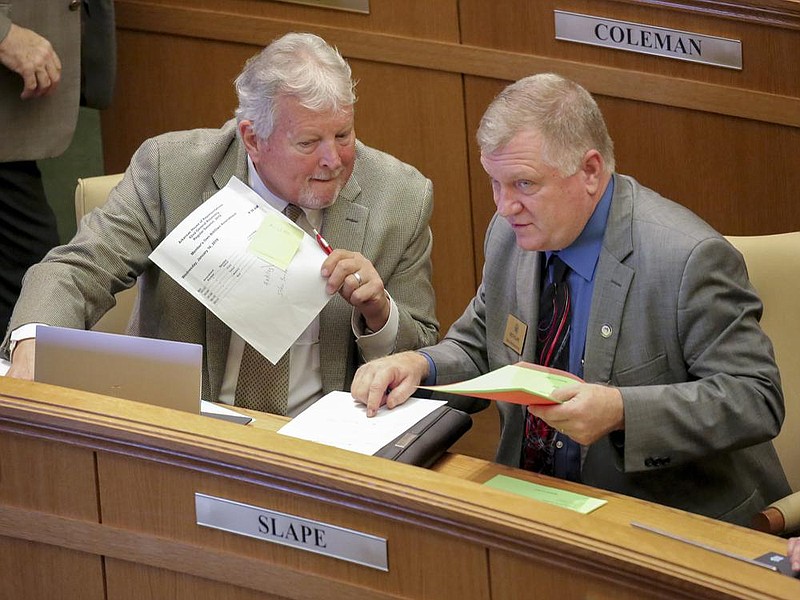 Two state representatives -- whose districts include Pope County -- and the mayors of five Pope County cities on Saturday asked the state Racing Commission to take steps to reexamine and remedy a lopsided score issued by a single commissioner when the gaming license was awarded to a Mississippi casino operator last week.

Also on Saturday, Gulfside Casino Partnership, which was awarded the Pope County license, demanded that it be allowed to appear and participate in a Racing Commission meeting set for Monday morning to consider affidavits from Cherokee Nation Businesses alleging bias by the commissioner and misrepresentation by Gulfside.

"We believe the very integrity of the Arkansas Racing Commission is at stake in this matter," Rep. Stan Berry, R-Dover, and Rep. Keith Slape, R-Compton, said in a letter dated Saturday to Racing Commission Chairman Alex Lieblong. "Regardless of our personal opinions as to the best applicant for the casino license, the people of Pope County and the State of Arkansas are owed a thorough, fair and unbiased scoring and selection process. Sadly, it appears, this did not occur on June 18."

"It's not unexpected that elected officials would express concern for the integrity of the process," McDaniel said.

On Thursday, the Racing Commission awarded Gulfside the license to construct and operate a casino in Pope County after evaluation scores by commissioners were tallied, with Gulfside scoring 637 compared with Cherokee's 572.

Commissioner Butch Rice of Beebe gave Gulfside a score of 100, compared with his score of 29 for the Cherokees. The 71-point difference in his totals was larger than the difference in the total of all the commissioners' scores.

Berry and Slape urged the commission to use Monday's meeting as an "opportunity to fully examine this issue and take steps to ensure a fair and equitable outcome."

At the beginning of Thursday's meeting, Deputy Attorney General Olan Reeves warned the commission to ensure that there was not a "huge difference" between the scores or it would appear "arbitrary."

Berry and Slape said in the letter that the "results of the meeting appear unjust and are troubling at best."

"It is our hope the commission will reexamine the activity of this past Thursday and ensure that all commissioners conducted their behavior in accordance with the Attorney General's warning," Berry and Slape wrote in their letter. "At the very least, the citizens of our great state deserve to have confidence in the actions of their sworn officers. There is simply too much at stake for Pope County and the State of Arkansas to allow this to stand without further scrutiny."

On Saturday, state Sen. Breanne Davis, R-Russellville, said she has followed the issue closely, as Pope County is in her district and she has dealt with Rice throughout the process.

"I know him to be someone with integrity and a passion to serve Arkansas and Pope County well throughout this entire process," Davis said. "The attacks on Mr. Rice's character are disgusting at best."

"I would completely trust his judgment," Dismang said. "Butch is a very rational person. He has incredible character and he's a very strong member of our community."

Also on Saturday, a letter signed by mayors of five Pope County cities -- Dover, London, Hector, Atkins and Pottsville -- encouraged the commission to strike Rice's scores, "as they were with clear and destructive purpose to single-handedly control the outcome of the process.

"Such action will make a huge difference to the people of Pope County, but more importantly will restore the intended integrity of the process and show these companies from Oklahoma and Mississippi that the system in Arkansas is not 'rigged' and our government operates with fairness," Mayors Roger Lee, Eddie Price, Carey McGhee, Rowdy Sweet and Randy Tankersly said in the letter.

All five of the cities are beneficiaries listed in a $38.9 million economic development agreement negotiated by Cross in August, before the county Quorum Court endorsed the Cherokees for the casino license.

Gulfside and the Cherokees were among the five original applicants for the Pope County license. All were rejected by the Racing Commission last year because none met the commission's rule and a state law in place at the time requiring endorsements from current officials at the time of application.

Reps. Berry and Slape were among the 93 House members who voted in March to pass what is now Act 371, which requires endorsements come only from local officials in office when the application is submitted.

The Cherokees resubmitted their application after being endorsed by the Pope County Quorum Court in August. Subsequently, the Racing Commission voted to accept the Cherokees' application on a "good cause" basis.

On Friday, McDaniel, Cherokee's attorney, filed two affidavits alleging that Rice was biased toward Gulfside and that Gulfside misrepresented facts during its interview with the commission.

McDaniel said Rice's score should be thrown out, which would give the Cherokees the highest cumulative score and therefore the casino license.

In Saturday's letter to Reeves, the deputy attorney general, Gulfside attorney Casey Castleberry said the commission has no authority under the law to remove Rice's score and declare Cherokee the license recipient.

"To be clear, Gulfside vehemently denies the allegations that it improperly influenced Commissioner Rice in any way, but even if Commissioner Rice were biased, which he is not, the remedies sought by CNB [Cherokee Nation Businesses] are not available under the Administrative Procedure Act," Castleberry said.

The act applies only to cases "of adjudication, and in cases of rule making," Castleberry said.

Castleberry also said the Cherokees should have been eliminated from the candidate pool because the application was submitted under Legends Resort & Casino LLC rather than Cherokee Nation Businesses.

The limited liability company was formed Sept. 11, 2019, and therefore does not have any casino gaming experience, as required by the state's gaming rules to be eligible for a casino license, Castleberry said.

"To the extent Legends may argue that its member, CNB, has gaming experience, that argument avails it nothing," Castleberry said in the letter. "The law is clear that 'A limited liability company is not merely an informal business association. It is a legal entity distinct from its members.'"

Castleberry said Gulfside has a right to appear and participate in Monday's meeting to defend against Cherokee's attempt to impugn the character and reputation of Gulfside and its counsel.

"We should be allowed to defend ourselves against the baseless allegations that have been levied against us. Moreover, Gulfside was awarded the high score, not only cumulatively, but by a majority of the Commissioners," Castleberry said. "If CNB is allowed to participate in a meeting that bears directly upon the license which the Commission has already voted to award to Gulfside, fairness and due process require that Gulfside be allowed to participate, as well."