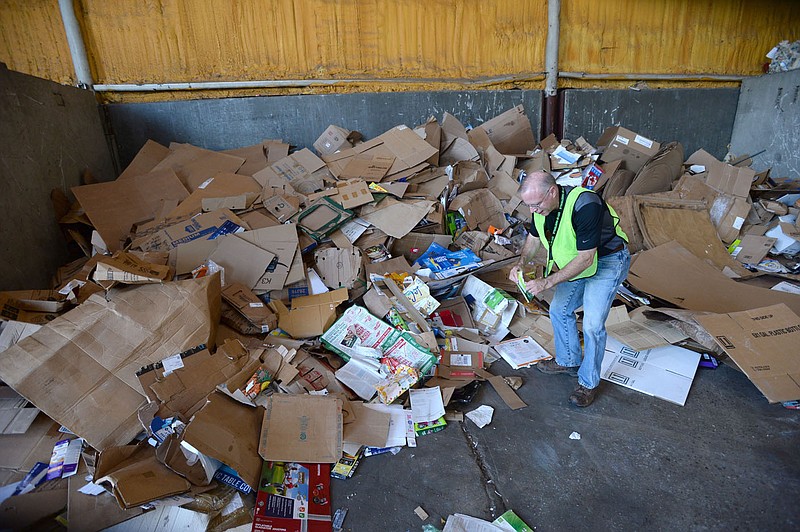 Brian Pugh, Waste Reduction Coordinator for the city of Fayetteville's Recycling and Trash Collection Division, removes a contaminant Friday, June 19, 2020, from a pile of corrugated cardboard at the division's facility. Recycling collection during suspension of the curbside program was about 79% of what it was from March to June last year. The city√¢‚Ç¨‚Ñ¢s curbside service resumes Monday.Visit nwaonline.com/200621Daily/ for today's photo gallery. (NWA Democrat-Gazette/Andy Shupe)

FAYETTEVILLE -- Residents have delivered almost as much recyclable material to drop-off locations in the past three months as the city used to collect curbside, figures show.

Curbside pickup was halted March 23 to prevent the spread of the coronavirus. Administrators said at the time they worried about potential exposure among workers sorting at the curb and transferring the virus from bin to bin in neighborhoods.

Extra drop-off sites were set up around the city, and residents were asked to sort recyclable items into containers.

The city collected about 1,133 tons of recyclable material from March 23 to Tuesday, according to numbers from the Recycling and Trash Division. For the same time period last year, nearly 1,429 tons were collected.

That means the city collected about 79% of the tonnage it did pre-pandemic, when curbside routes ran as usual.

Brian Pugh, waste reduction coordinator, said there's no way to know how many residents used the drop-off sites, but the collection numbers were better than expected. Trash collection increased by about 20% while curbside was suspended, he said.

The main issue recycling crews ran into was contamination and different types of materials getting sorted incorrectly, Pugh said. Although the containers at the drop-off sites have individual compartments for No. 1 and No. 2 plastics, aluminum and steel cans, glass, cardboard and mixed paper, it was pretty common for residents to sort incorrectly, he said.

That resulted in crews having to sort at the point of baling, Pugh said. The baling process at the city's recycling facility isn't set up as a sorting operation. Crews had to dig through the items, negating the point of suspending the curbside program, he said.

Workers removed trash and other items that cannot be processed for recycling, Pugh said. No loads were rejected for processing, he said.

The curbside service will resume Monday. Three temporary drop-off sites at the Northwest Arkansas Mall, Boys & Girls Club on Rupple Road and at Gary Hampton Field will stick around until June 29. The two permanent sites on Happy Hollow Road and North Street will continue to be available.

Curbside sorting remains the better option because it spares workers from having to get on their knees and elbows to pick through everything, Pugh said.

Workers assigned to residential routes were moved to the baling station to sort through items or clean and empty the drop-off sites, he said.

April Rose and her family moved to the city from Kenmore, Wash., about 20 minutes north of Seattle, a couple of weeks ago. The family wasn't familiar with the city's usual recycling program, having moved in the middle of the pandemic.

The family used the excursions to the Boys & Girls Club drop-off site on Rupple Road as an opportunity. The trips served as a chance for Rose's four children who live at home, ages ranging from a baby to 17, to get hands-on experience on how recycling collection works. It became kind of a fun game for them, Rose said.

The 4-year-old, in particular, became especially adept at sorting.

"We'd just come out as parents and dump it all in one spot, and then she would make that one of her little chores, separating it out before we would leave," Rose said. "She took so much pride in it."

Rose and her husband also spent the trips as a sort of date night. With four children at home, any bit of time away basically amounts to date night, she said.

It was also nice just to see other people.

"Everybody there would be so conscientious. I saw 80- to 90-year-old people down to teenagers coming with their cars filled with stuff," Rose said. "That community aspect is what I thought was so special. We looked forward to it."

Other cities in Northwest Arkansas have had their recycling services operate as usual during the pandemic. Springdale, Rogers and Bentonville contract their services with companies using trucks with mechanical arms to pick up bins containing recyclable material mixed together. The contractors have access to third-party facilities where the items are sorted.

The federal Centers for Disease Control and Prevention updated its research findings last month, saying the coronavirus likely spreads most commonly through person-to-person contact. Respiratory droplets from the mouth and nose of an infected person can get to the mouth and nose of another person within 6 feet. An infected person may not show symptoms.

It may be possible for someone to get covid-19 from touching a surface or object with the virus on it and then touching their face, but it's not believed to be the main way it spreads.

A lack of information in March on how the coronavirus could spread prompted the city to err on the side of caution, said Lisa Thurber, communications director. The administration now feels more confident workers can resume curbside service safely while wearing personal protective equipment, she said. Residents are encouraged to wipe down bins after handling them and to wash their hands. 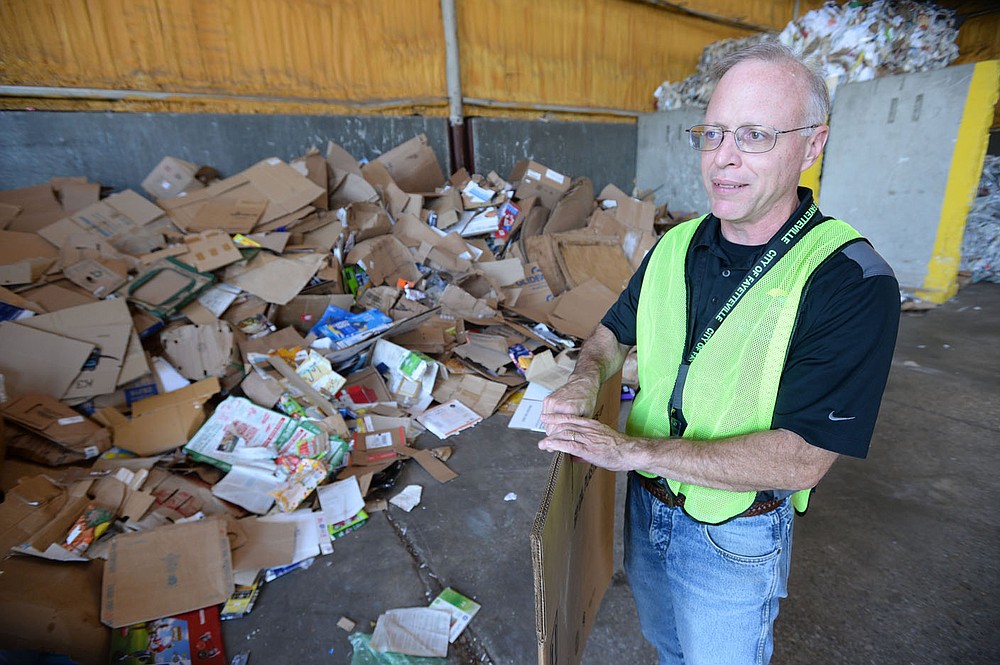 Brian Pugh, Waste Reduction Coordinator for the city of Fayetteville's Recycling and Trash Collection Division, speaks Friday, June 19, 2020, near a pile of corrugated cardboard at the division's facility. Recycling collection during suspension of the curbside program was about 79% of what it was from March to June last year. The city√¢‚Ç¨‚Ñ¢s curbside service resumes Monday.Visit nwaonline.com/200621Daily/ for today's photo gallery. (NWA Democrat-Gazette/Andy Shupe) 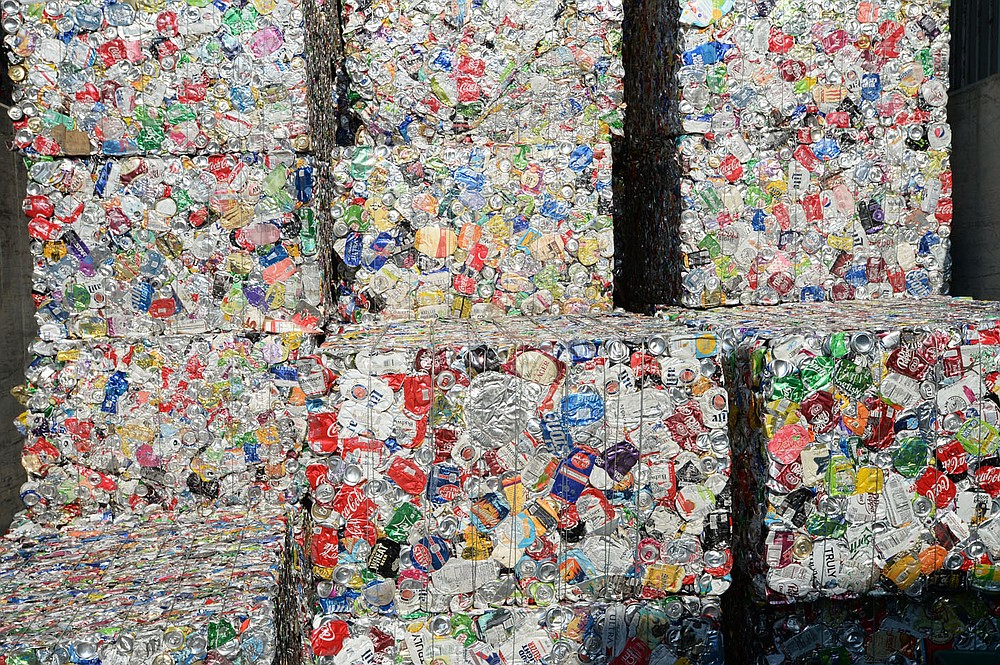 Bales of aluminum cans are stacked Friday, June 19, 2020, at the city of Fayetteville's Recycling and Trash Collection Division facility. Recycling collection during suspension of the curbside program was about 79% of what it was from March to June last year. The city√¢‚Ç¨‚Ñ¢s curbside service resumes Monday.Visit nwaonline.com/200621Daily/ for today's photo gallery. (NWA Democrat-Gazette/Andy Shupe) 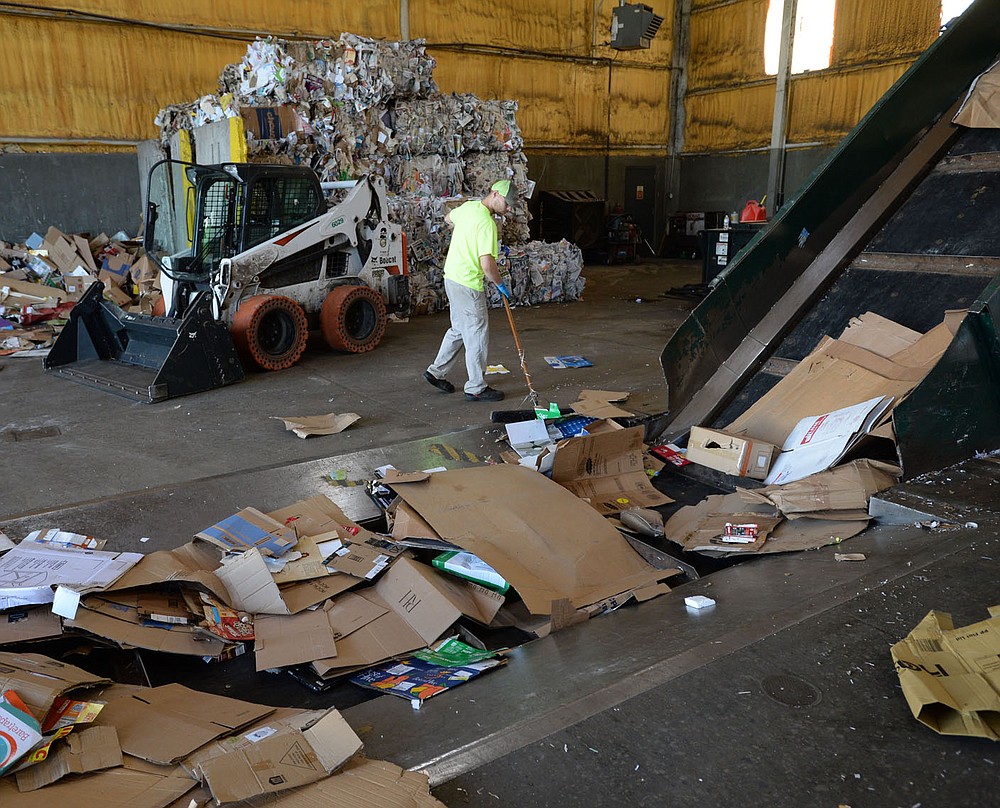 Christopher Richardson, a worker with the city of Fayetteville's Recycling and Trash Collection Division, sweeps boxes that fell from a skid steer loader Friday, June 19, 2020, while loading corrugated cardboard into a baling machine at the division's facility. Recycling collection during suspension of the curbside program was about 79% of what it was from March to June last year. The city√¢‚Ç¨‚Ñ¢s curbside service resumes Monday.Visit nwaonline.com/200621Daily/ for today's photo gallery. (NWA Democrat-Gazette/Andy Shupe)
More News

For more information on the city’s recycling program, go to: