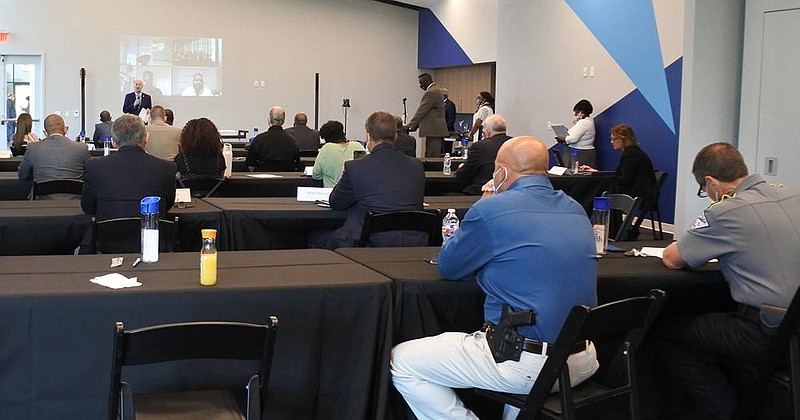 Members of the Task Force to Advance the State of Law Enforcement in Arkansas and others listen as Gov. Asa Hutchinson speaks Thursday at Fort Smith’s U.S. Marshals Museum during the task force’s first meeting. (Arkansas Democrat-Gazette/Thomas Saccente)

FORT SMITH -- A task force whose aim is to make recommendations to improve law enforcement throughout the state had its first meeting on Thursday, with Gov. Asa Hutchinson setting its mission and members sharing their points of interest.

One member, Pine Bluff Mayor Shirley Washington, said via Zoom that moving forward, all communities in the state and nation, including her own, have to be "very on point" in regard to sensitivity training, "because I think some things happen, and sometimes people are not even aware or conscious of how they react in certain situations."

"So sensitivity training is going to be very important."

The governor announced the formation of the Task Force to Advance the State of Law Enforcement in Arkansas on June 9. He asked its members to study and analyze the best practices and procedures for recruiting, training, and maintaining law enforcement officers in the state.

The panel will make recommendations to the governor on "enhancing trust between law enforcement and communities, and improvements or changes needed to enhance the profession of law enforcement to ensure compliance with standards."

This comes in the wake of nationwide protests that followed the death of George Floyd, a black man who died in Minneapolis after a white police officer pressed his knee to Floyd's neck.

At the meeting Thursday, Hutchinson said the reality of the task force is that it is "born out of protest." It is also long overdue, something that Arkansas needs to and should do in terms of fresh examinations at procedures and what it wants to accomplish in law enforcement across the state.

"But the impetus for this task force ... is the fact that the American public, and internationally, saw things on the big screen that troubled them in the depths of their soul," Hutchinson said at the U.S. Marshals Museum in Fort Smith. "And they said, "We need to take a look at how we do things: how we build community relations, how we train and how we hold officers that do the wrong thing accountable.'"

An activist who was present was Layla Holloway, who, along with fellow task force member and Van Buren resident Emma Davis, organized "Black Lives Matter Protest: A Demonstration for George Floyd," that took place in Fort Smith on May 31.

Holloway said her biggest priority is accountability within the police department in regard to rule breaking.

Task force member Scott Hamilton, chief executive officer and president of the Urban League of the State of Arkansas, a nonprofit organization in Little Rock, said he hopes the task force talks about ways to "treat each other as humans."

"And if we do that, I think we will be very successful in moving where we need to be," Hamilton said. "I think we will find ways that everyone in our society can get along better. ... We all have differences. If we think we don't, we're fooling ourselves, and I think as we look at what we're faced with today, I think that if we have an open heart, if we come at this with compassion, if we're willing to listen, if we're willing to negotiate, I think we will be extremely successful, and ... we can lead the way to a much better future here." 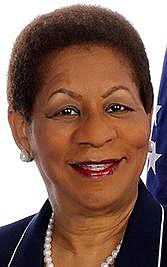