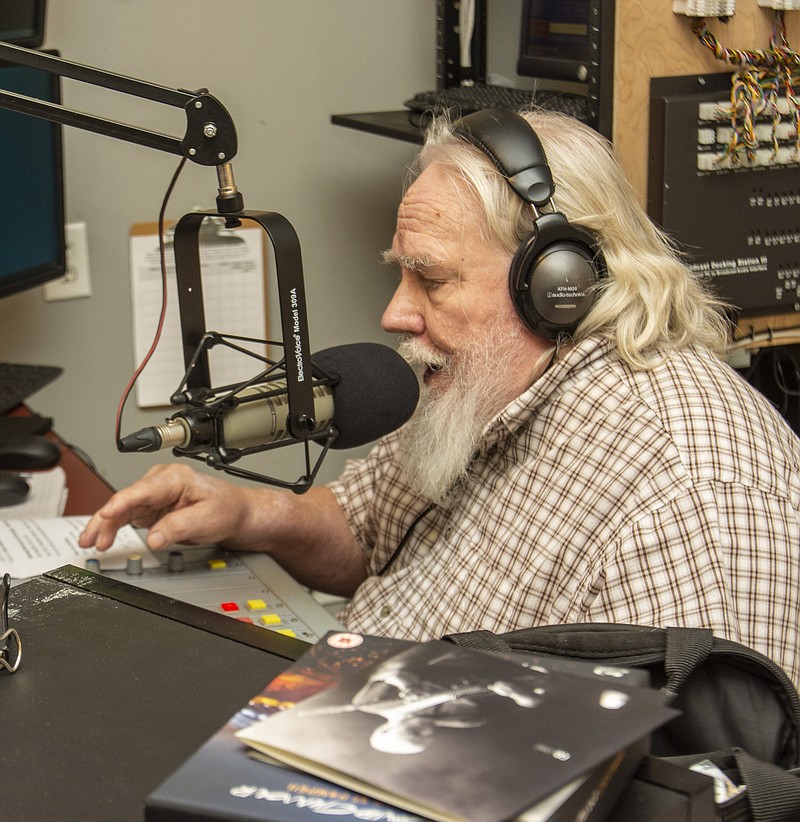 Dale Seidenschwarz, aka Clyde Clifford, is back on the air with Beaker Street, the legendary radio program his first hosted on KAAY, 1090-AM, in 1966. The show now airs on the Arkansas Rocks network on Friday from 9 p.m.-midnight. (Arkansas Democrat-Gazette/Cary Jenkins)

Ray Unruh was a kid in rural western Kansas when he first heard the strange and exciting sounds coming through his AM radio in the dark of night.

He was listening to Beaker Street, the late-night program that debuted in 1966 on Little Rock radio station KAAY-AM, 1090, and specialized in a freewheeling, playlist-shunning combination of psychedelic rock, blues, jazz and beyond. It was hosted by the eminently laid-back Clyde Clifford.

"Beaker Street was must-listen radio. That is where I discovered much of the music I still listen to today," Unruh, 60, wrote in an email last month.

Because of KAAY's powerful 50,000-watt signal, Beaker Street reached much of the United States and stretched north into Canada and south to Central and South America, the Bahamas and Cuba and introduced rock 'n' roll, which back then was still a sort of outlaw pursuit, to an eager audience.

Unruh, a cameraman for CBS News, has a story about the show's far-flung impact.

"In 2016, we were covering President Obama's visit to Cuba," he said. "As it turned out, the Rolling Stones were scheduled to play in Havana just a few days later. We convinced the office to let us stay and cover the Stones as well."

They interviewed an aging Cuban rock band about life as underground musicians during the Castro regime.

"Their English left a lot to be desired, but one phrase kept popping up, 'Little Rock, Little Rock,' " Unruh said. "After the interview, I went up to the leader of the group and said in my best radio station voice: 'Beaker Street, the underground music service of Lin Broadcasting.' He became excited, hugged me, saying 'Si! Si! Beaker Street!'"

After a nine-year absence, Clifford and Beaker Street have returned. The show airs from 9 p.m.-midnight each Friday on the Arkansas Rocks network of classic rock stations. It can also be streamed at arkansasrocks.com.

Clifford, whose real name is Dale Seidenschwarz, was an engineer who hosted the show from KAAY's transmitter site in Wrightsville.

For five nights a week, from 11 p.m.-2 a.m., Seidenschwarz, alone at the brick-building at the transmitter site, would play a wide assortment of music and talk to listeners in his friendly, easygoing manner. It was completely different from the nonstop patter of regular deejays.

"Way back when, I was trying to be the world's best rock jock," Seidenschwarz said during an interview in February. "You were on top of the record, talking right into the first notes of the singer singing and you picked it up at the end. You were never dry, never had dead air, always talking over the music."

That approach simply didn't work for what he was playing on Beaker Street. Listeners were more interested in hearing the entire song, not some deejay yakking over the intro.

"People wanted to hear the first few notes of Pink Floyd, which aren't very loud all the time," he said. "I had to shift into a whole different style. It was just like talking to your friends, not talking at them. It became a one-sided conversation with folks on the other side, giving them space to think thoughts and hear words."

There were other underground shows and powerful stations blasting rock 'n' roll in the late '60s and '70s, notably stations in Mexico that avoided FCC regulations, but they didn't have much of an impact on what he was Seidenschwarz was doing.

"It just evolved," he says of his on-air approach. "I can't point to any influences. I'd get air checks from some of the other quote-unquote, underground stations, but everybody did something different, and it was not what I did."

To drown out the incessant hum of the fans used to cool the RCA BTA-50F1 transmitter, Seidenschwarz played instrumental music as he spoke. "Cannabis Sativa," a trippy piece of electronic psychedelica by the band Head became his go-to background jam and added to the otherworldly sense to the proceedings.

He played music from the station's library, picking whatever tickled his fancy.

"The idea was that I would just explore stuff and get all the weird albums," he said. "I would get mail by the bushels and people would ask for things and I would see if I could get my hands on it. I would play just about anything and give it a shot or a few shots."

"I came home one time and I found 20 boxes of records from Elektra Records on my doorstep," he says with a laugh.

Seidenschwarz hosted the show from 1966 to 1972, when he left the station. Beaker Street continued with other deejays until it was canceled in 1977, according to information at the show's Facebook page. A decade later, it reappeared with Clifford at the controls on KZLR-FM, then jumped to KMJX-FM. Clifford and Beaker Street later moved to KKPT-FM, where the final show aired on Feb. 6, 2011.

On New Year's Eve 2019, immediately after retiring from his 37-year-long career in creative services at the University of Arkansas for Medical Sciences, Seidenschwarz signed on as Clyde Clifford for a surprise episode of Beaker Street on the Arkansas Rocks network.

"It was like riding a bicycle," he said. "The only problems I had were finding things on the server. As far as what was I going to do or say, it's all stream of consciousness."

Seidenschwarz, 74, was diagnosed with multiple myeloma, a cancer that forms in plasma cells, and Beaker Street's full-time return was put on hold as he underwent treatment.

Finally, on May 16, he signed on for the first installment of the now weekly Beaker Street on the Arkansas Rocks network. The first track he played was a funky cover of The Meters' "Hey Pocky Way" by the String Cheese Incident.

Tom Wood is a Little Rock radio veteran and the music director of Arkansas Rocks, which went on the air in spring 2019, with a format of classic rock chestnuts alongside deeper cuts not normally heard on the radio.

"Arkansas Rocks is the perfect vehicle for him to do this," said Wood, who worked with Seidenschwarz when Beaker Street was on KMJX-FM. "The attitude of independent radio, of playing more music than other rock stations, we have no researched playlists. It's the perfect platform for Clyde and Beaker Street. And it's amazing how many people have been introduced to our network because Clyde Clifford came back."

Just as it was before, Beaker Street has no playlist and Seidenschwarz just says what comes to mind when the mic is on. He also still plays "Cannabis Sativa" in the background when he speaks.

"I don't even know when I walk into the control room what I'm going to play," he said. "I just start looking through things. This sounds artsy-fartsy, but something will speak to me and I will say, 'You're first.' And that will lead to something else."

Seidenschwarz said he is also on the lookout for local bands to spotlight on the show.

"I'm trying to find small bands that have some real talent that I can expose."

Beaker Street is in the middle of a Friday night lineup that includes Wood's Beatles-theme show Magical Mystery Tour at 8 p.m. and Mark "Uncle Marcus" Wallace, who spins an entire classic rock album on his show after Beaker Street.

There's an intimacy that develops between a voice on the radio and a listener. The listener is left to imagine details about the person speaking, and the speaker has to trust that the listener is out there, somewhere. And listeners to music-based shows are also there to hear what the host will play next, to be surprised, to hear something new, or something familiar that triggers memories of a different time.

"A personality can truly make a lifelong impression on listeners," Wood said. "Clyde's pace is so slow and unhurried, and he's got this personable way of thanking people for tuning in. Then, of course, there is the music, which is completely different from what you will hear if you tune in anywhere else."

Kevin and Faith Lindley of Albany, Ill., have been married for 46 years. Beaker Street provided part of the soundtrack to their younger days growing up in Iowa.

"One of the fondest memories I have from when I was a teenager was turning on the radio one night and finding KAAY from Little Rock," Kevin, 65, said.

He refers to Clifford not as a disc jockey, but as a "musical guide."

"He would guide you through all types of music," Kevin said. "What he did was groundbreaking on the radio ... he was trying to get us to listen to all kinds of music."

It was through Beaker Street that Kevin first heard Black Oak Arkansas, one of his favorite bands.

"We lived in the dead center of the U.S., and we weren't exposed to that kind of music," said 63-year-old Faith. "To hear that type of music was eye-opening."

She remembers being 15 and listening to the late-night show stealthily, so her parents wouldn't hear.

ever," Kevin said. "Nobody did what he did. He was an innovator."/@@nep

Kevin, a lifelong hard rock fan, now suffers from dementia, Faith said. The return of Beaker Street has been a comfort and joy.

"I have his tablet set up and he sits in his recliner from 9 to midnight every Friday listening," she said. "Afterwards, he will tell me what Clyde played and what he learned. He's been very excited since it's been back. It's relaxing for him. It takes him to another time to before he was sick, and he is really comfortable and at peace when he listens to that show."

One can safely suppose that Beaker Street's return is just as beneficial to its host.

"It's really touching to me," Seidenschwarz said earlier this month. "People are harking back to long-ago times and they tell me how it reconnects them to their past and to the good times they had."

The show's Facebook page has 6,700 members, and Seidenschwarz says that he has heard from listeners from around the U.S. as well as the United Arab Emirates, New Zealand, Ireland, Australia and Cuba.

His wife, Trish, helps keep up with the Facebook page and listener messages. They have known each other since she listened to the show on KAAY and have been married for 22 years.

In August, he may undergo another round of treatment for his cancer and could be off the air for a few weeks, Seidenschwarz said. If that happens, Wood will likely cover for him on those shows.

"Of course I jumped at the opportunity," Wood said.

More than 50 years after he first signed on as Clyde Clifford, Seidenschwarz is thrilled to be doing it again.

"It has been such a kick to be back on the air," he said. "The radio bug is a vicious habit. Once it bites you, you're stuck. I just happened to be at the right place at the right time. I'm just a little guy who sits here and plays records on the air. It sure is nice that people enjoy that, and I can't say enough how much I love the people who listen."