Alternate sites studied for use in state's covid care 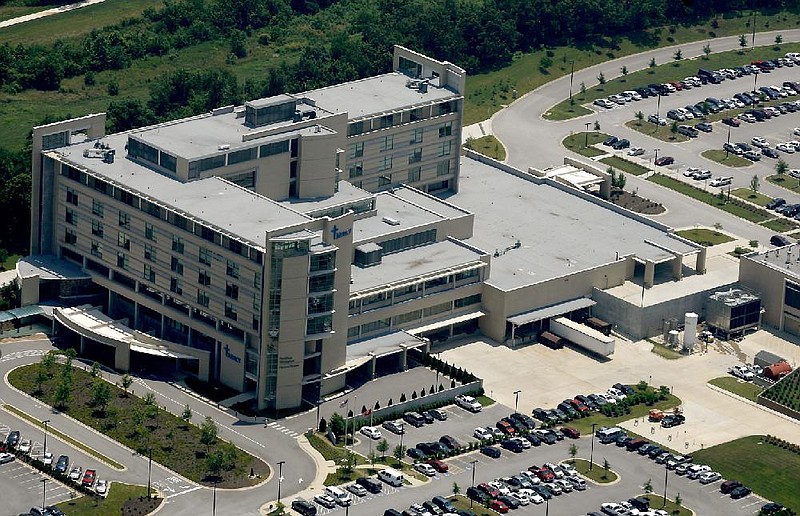 Mercy Hospital of Northwest Arkansas is shown in this undated file photo.

The U.S. Army Corps of Engineers has evaluated 15 sites, including hotels and event spaces, across Arkansas as potential hospital sites should the increase in covid-19 hospitalizations eventually prompt their use.

The state isn't close to converting the sites to hospital care, although hospitalizations for covid-19 continue to rise. Additionally, hospitals have surge plans in place, as a part of their normal accreditation process, that would send patients first to other area hospitals.

Amid increasing hospitalizations, the Arkansas Department of Health is monitoring bed use, ventilator use and updating its internal numbers twice daily.

In March and April, the state requested an evaluation of several "alternative care" sites to use in the event the worst-case scenario projections of the virus' spread came to fruition.

"Alternate care sites," as they are called by the Corps and the U.S. Centers for Disease Control, have been set up in several states during the pandemic.

While the CDC's guidance for the sites focuses on using the sites for varying levels of covid-19 patients, the Corps evaluated the sites' potential use as care centers for noncovid patients, as well.

Hospitals often have their own alternative plans that wouldn't have been evaluated by the Corps.

Hospitalizations have risen fast in Northwest Arkansas, where the outbreak is currently the worst in the state.

Mercy Health, which has two locations in Northwest Arkansas, plans to use all of its beds before moving to backup plans, spokeswoman Jennifer Cook said. Those plans include converting two floors of shelled space in a new hospital tower for bed space or using agreements with other Arkansas and Missouri hospitals to send patients.

As of Friday, 224 people statewide were hospitalized, a number that's grown steadily in recent weeks.

Most Corps-evaluated sites were in more populous areas in different parts of the state.

In the Little Rock area they included Barton Coliseum, the Hall of Industry, Marriott Downtown, Simmons Bank Arena and the Statehouse Convention Center.

In Northwest Arkansas, the Corps evaluated the Jones Center and the John Q. Hammons Center.

Hotels and convention centers rated the highest in the Corps' assessments, often requiring the least amount of upgrades but also costing more to convert because of their size.

The Department of Health identified sites and asked the Corps to assess them, Jones said. The department looked at larger facilities in larger areas and what surrounded those sites.

"For example, when we were considering the Statehouse Convention Center, one of the positive things we felt with respect to that was there was an attached hotel," Jones said.

If site owners were amenable, the Corps evaluated the infrastructure, identifying bathroom locations and electrical connections and determining how bed space could be configured. The Corps also looked at ventilation systems in the buildings that could be a conduit for disease spread, spokesman Jay Townsend said.

Some sites in Arkansas didn't pan out as alternatives because of unsuitability or high costs of converting them into hospital space. The Corps evaluated War Memorial Stadium and the former Army-Navy Hospital in Hot Springs but recommended against using them, Townsend said.

The Arkansas Democrat-Gazette obtained the evaluations of eight of the sites in Central and Northwest Arkansas and a hospital-submitted assessment of a hotel in Howard County.

In late April, Howard Memorial Hospital sought to use 12 rooms at the Southern Belle Inn in Nashville. At the time, administrators feared an increase in cases after a positive test at a nearby nursing home. The hospital has 25 beds, about a quarter of which are usually occupied, and no intensive care unit.

Evaluations for several sites indicated they met all required criteria to be used. Some sites contained environmental hazards or were insufficient in infrastructure details such as sprinkler systems. The estimated costs of converting the spaces to alternate care sites were often several millions of dollars, ranging from $3.2 million to $14.7 million in the documents reviewed by the newspaper. The Corps most often provided an estimate for converting the spaces for care of noncovid-19 patients.

How many beds could fit in each facility depends on what level of care would be offered and whether it accepts patients with covid-19. Beds would be more spread out in a facility caring for covid-19 patients.

But health department officials determined in April that alternate sites would be better for covid-19 patients as a matter of reducing the spread of infection.

Virus spread is less of a concern among patients if they all have covid-19, Jones said, but other protocols are needed if it's unclear if anyone has the virus.

"You're not concerned about about the contamination factor because you know that everybody's already dirty, for lack of a better term," Jones said.

Nationwide, the Corps has evaluated well over 1,000 sites, Townsend said.

Areas that became the nation's first covid-19 hot spots have been winding down their alternate care sites.

In New York City, a field hospital at the Jacob K. Javits Convention Center was no longer accepting new patients as of April 30, a FEMA spokeswoman said at that time. At its peak usage, 453 patients were being treated at the facility, and more than 1,000 people received care there overall.

In Louisiana, contracts to staff a site at the Ernest N. Morial Convention Center in New Orleans are in place through June and there are still some patients there. Officials haven't made decisions about the "long-term future" of the site, Louisiana Department of Health spokesman Kevin Litten wrote in an email.

Constructed in 10 days for $192 million, most of the demand for that facility came from nursing-home patients, he said, and its staffing and supplies were tweaked to meet that need.

Areas with less active transmission, however, also prepared facilities for possible surges with an eye toward those sites' use in the future.

According to the federal Centers for Disease Control and Prevention, Montana has fewer than 1,000 total virus cases. But a $2.6 million site to manage surges was finished in May, a U.S. Army Corps of Engineers news release said.

The 100-bed site sits on a previously vacant floor of a children's hospital in Kalispell, a city of about 23,000. The state requested the site in anticipation of this year's flu season.

If it's deployed, doctors plan to use the alternate care site for nonacute patients who do not have covid-19, freeing up space elsewhere in the health center.

That state plans to take "every step" possible to prepare for what's next, Montana Coronavirus Task Force leader Maj. Gen Matthew Quinn said in the release.