Granny’s games are blasts from the past 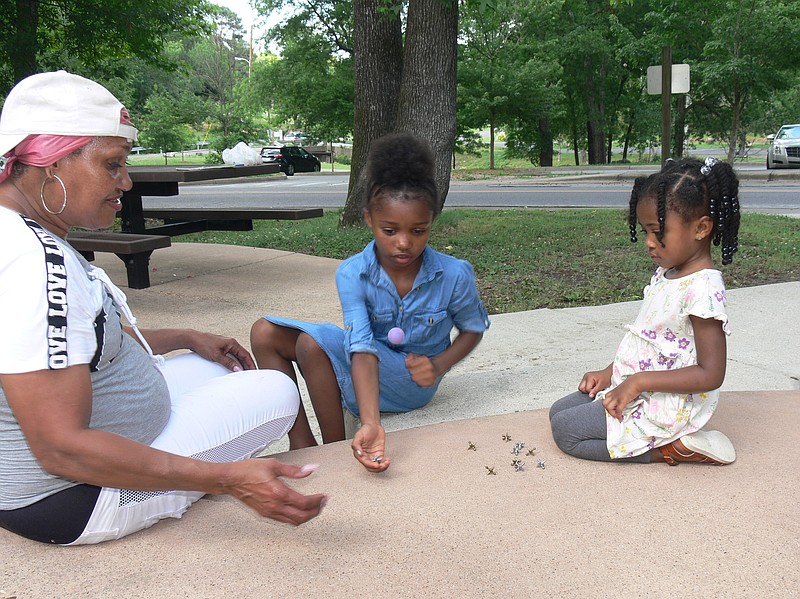 Tina Willis (left) of Hot Springs teaches her granddaughters Syncere and Nylah to play jacks at Hollywood Park in Hot Springs. (Special to the Democrat-Gazette/Jerry Butler)

Grandparents and great-grandparents are living archives stuffed with knowledge about important things, like how to have fun.

What if they were to share some of what they know about fun you can have when there's no TV to watch, no soccer team practice, no ballet or taekwondo classes, and Mom, who is working from home, says, "Go outdoors"?

In backyards and schoolyards in Arkansas in the 1940s and '50s, children knew all kinds of games that could be perfect for this pandemic moment. For example, as Style recalled June 15, boys used to play marbles and girls played jacks. I explained marbles), so what is jacks?

Jacks is a game that requires and encourages dexterity. The game is named for the toys used to play it: Jacks are metal, three-dimensional, six-pointed, star-shaped objects, each usually smaller than three quarters of an inch across. According to the Encyclopedia Britannica, the game is ancient and has been played around the globe using stones, bones, seeds and filled cloth bags. It has been called jackstones, fivestones, chucky-stones and dibs. 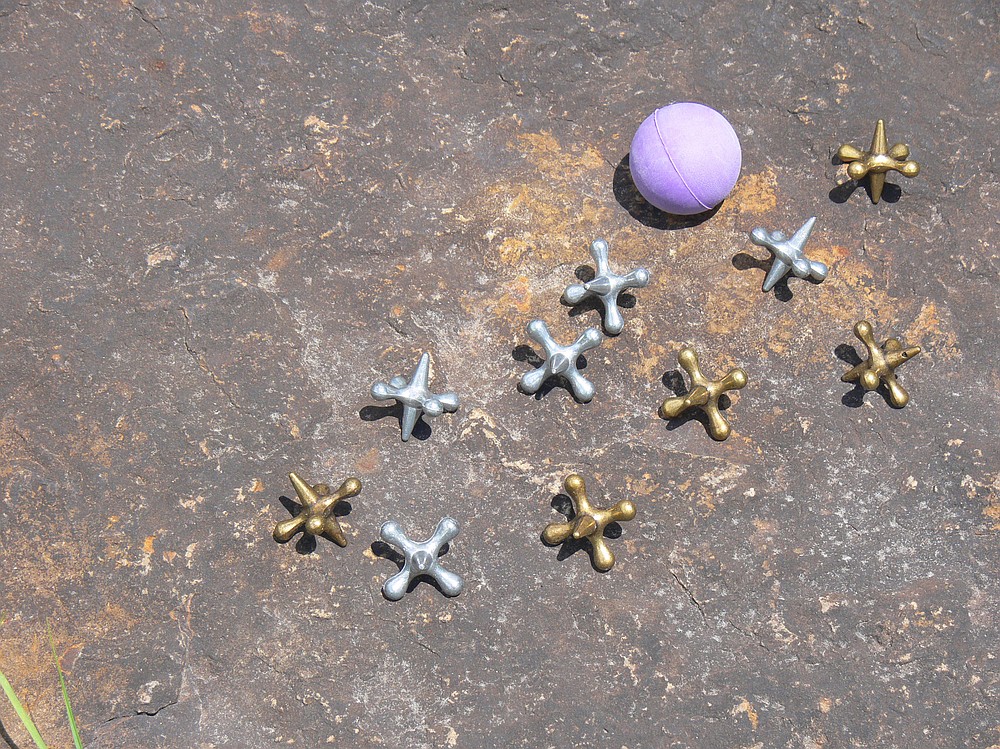 Jacks is a dexterity and counting game named for the toys used to play it. (Special to the Democrat-Gazette/Jerry Butler)

In Grandoc's day, not quite so long ago, a few girls would arrive at school carrying a sock containing a dozen jacks and a small rubber ball that could be shared with other girls. Occasionally, a golf ball would be substituted for the small rubber one if jacks was to be played on concrete.

My wife, Sharon — aka Granmommy Butler — learned to play jacks outside a school at Keo in Lonoke County.

That six-room school building has long since been torn down, and the students have been consolidated into the nearby England School District. In England, as well as Keo, girls are no longer seen playing jacks, but Granmommy wants her granddaughter and her great-granddaughter to enjoy the game as much as she did when she was a girl.

"Caroline, Presley, come let's play jacks," she says, while the girls are watching TV. "What? You don't know jacks? Let's go out on the porch and I'll show you."

Outside, the lesson begins.

"First, while you are sitting, you hold eight jacks in one hand," she says. "Then, by releasing your fingers, gently drop them on the porch in front of you, like this, so that you can still easily reach the jacks.

"Next, you toss this rubber ball upward about a foot into the air and let it bounce one time.

The girls begin with some practice. Each girl will have a chance to pick up the eight jacks, one at a time, until she can do so without nudging a jack and losing her turn. "Caroline, you go first," Granmommy says.

"Great! Good job. Now let Presley try. Since she is small, we'll say it's OK if her ball bounces twice."

Once both girls have picked up all eight jacks, the round ends.

"It is my time again," Granmommy says. "This round, we will pick up the jacks two at a time instead of one at a time. After that, three at a time. We'll go in this way until we've picked up all eight jacks at a time with a single toss of the ball. The first person to pick up all the jacks without losing their turn wins."

"We don't have to stop just because Presley won, we can play over and over," Granmommy says, "and if you want to, you can play with 12 jacks instead of eight. Wanna play again? Maybe Caroline will win this time."

[RELATED: You’ll put your eye out!]

Jacks can be a solo game, and the rules can be modified. Skillful players might set restrictions to raise the challenge. For instance, the playing pieces might be dropped within the tight boundaries of a flooring tile; or players might have to pick up the jacks using their nondominant hand while catching the ball with their other hand, or with one eye closed.

There were fancy bounces: Drop the ball and move your hand around it in a lightning-fast circle before it touches down. Bounce it continually as though dribbling a basketball while the other hand darts into the pile of jacks and collects the jacks. 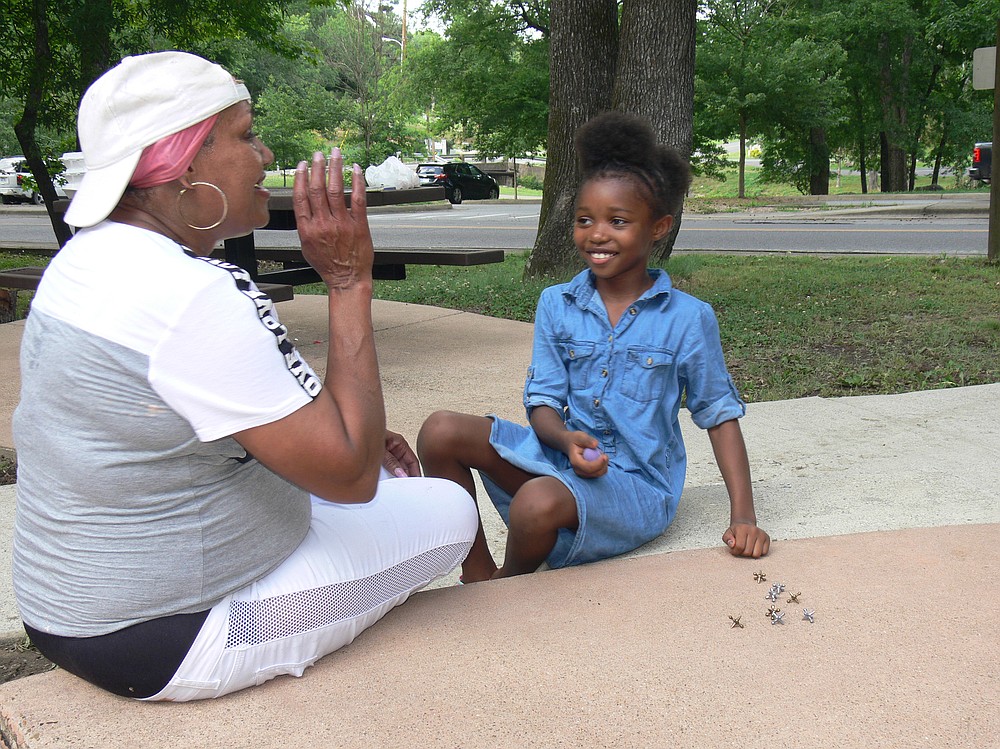 Tina Willis (left) of Hot Springs congratulates her granddaughter Syncere for being quick to learn to play jacks at Hollywood Park in Hot Springs. (Special to the Democrat-Gazette/Jerry Butler)

Jump-rope and hop-scotch are old-timey schoolyard games that have endured better than marbles and jacks. Perhaps the association jumping rope (sometimes called skip-rope) has had with boxing, physical fitness and dance has kept the activity alive.

Hop-scotch can help develop balance and physical fitness and is played today on concrete driveways, in community parks and along inner-city streets. Before the pandemic, the diagram of the hop-scotch game was occasionally seen drawn in chalk on cement surfaces, but seldom did one see children playing. In April, though, hop-scotch chalk diagrams cropped up along neighborhood streets, along with the chalk obstacle courses recommended by websites consulted by stressed-out parents trying to keep cooped-up kids busy.

Still, one did not see oldsters teaching little hoppers the game.

Schoolyards 70 or more years ago hosted some games that required teams or groups of players. Among those almost forgotten group games are Annie-Annie-Over and Lemonade.

Annie-Annie-Over is a game played with a ball thrown over the roof of a building such as a school, barn or house. It is a combination of the more familiar games of tag and dodge ball.

In Annie-Annie-Over, two evenly divided teams can consist of players of all ages. One team gathers on one side of the building and they have a ball; the other team gathers on the opposite side.

When the ball is caught, both teams attempt to exchange places while the player who caught the ball tries to throw it at opponents before their team gets around the corner of the building to safety. The fun is trying to guess which side of the building to run around to avoid being hit.

Upon getting hit, a player is out of the game. The team wins whose player is never hit by a thrown ball.

Clyde Berry, 82, of Hot Springs Village, is thrice retired -- from the telephone company, from selling securities and from delivering mail for the U.S. Postal Service. His grandkids call him "Coach." He attended a one-room school for eight years and remembers playing Annie-Over with children in his neighborhood.

Clyde's wife, called "Mimi," went to a small country school and also played Annie-Over with her big family. The Berrys have taught their children and grandchildren to play the game. They romp in the yard, dodging and throwing a ball over the house and at one another.

Coach says, "Oh, we played Annie-Over even as adults. On occasions, we've had friends as house guests from out of state and played. Great fun. Like being a kid all over."

Lemonade is a mix of charades and "catch," and it has a chanting, responsive litany that the players say together.

To play Lemonade, two teams line up opposing one another along two parallel lines scratched in the dirt with a "no man's land" in between.

As play begins, Team A huddles and secretly decides on some activity they will pantomime. It might be something like picking apples, milking a cow, or sawing a board. When the decision is made, that team will cross into no man's land chanting, "Bum-bum-bum, here we come," and walk toward their opponents.

Team B, in response, asks in unison, "Where you from?"

Then B says, "Get to work and show us something."

At that point, everyone on Team A begins to pantomime the activity they agreed to in their huddle. When a person on Team B correctly guesses the activity being pantomimed, the guessing team chases and tries to catch someone on Team A before the all run back across the line they stood behind at the start of the game.

Anyone who is caught becomes a member of Team B. The game continues with Team B in a huddle, thinking up a suitable pantomime.

Group games like these require little preparation or equipment. If children and young adults in your family don't know Drop the Handkerchief, Three Deep, Red Rover Red Rover, King of the Hill, Poison (a variation of marbles) and Capture the Flag, don't look them up on the internet. Ask Grandpa to teach you.