Opinions split on poll showing Trump support down in state 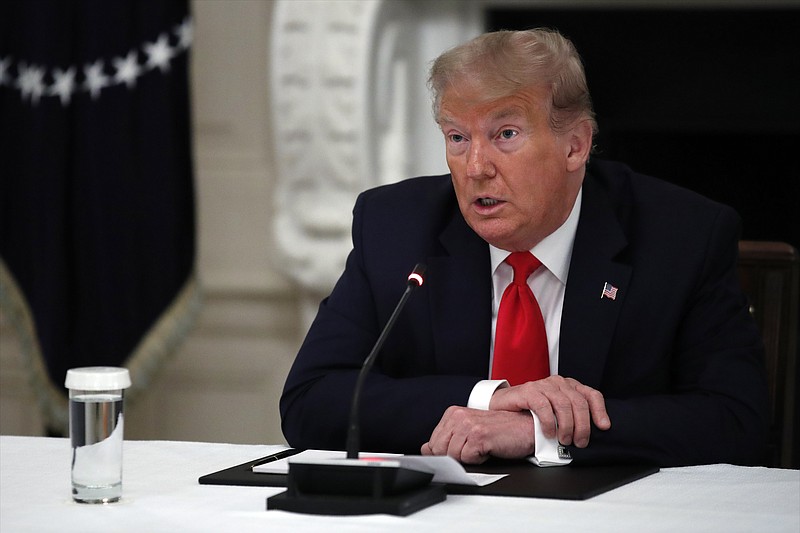 FILE — President Donald Trump speaks during a roundtable with governors on the reopening of America's small businesses, in the State Dining Room of the White House in Washington in this June 18, 2020, file photo. (AP Photo/Alex Brandon)

If this month's Talk Business & Politics-Hendrix College poll is accurate, then Arkansas' six electoral votes appear up for grabs for the first time in two decades.

Arkansas hasn't been a battleground state since 2000, when Republican George W. Bush of Texas defeated Democrat Al Gore of Tennessee, 51.3% to 45.9%.

The state hasn't had a true nail-biter since 1980, when former California Gov. Ronald Reagan, a Republican, narrowly defeated Democratic incumbent Jimmy Carter of Georgia, 48.1% to 47.5%.

Right or wrong, the survey has been energizing for Trump's Arkansas foes, according to Janine Parry, a political science professor at the University of Arkansas and director of the annual Arkansas Poll.

"It certainly has excited many deflated Democrats here, not to mention [political] consultants and television station ad reps. But I look at the other evidence, and it's hard not to feel like this is an outlier," she said.

Compared with 2016, when Trump received 60.6% of the vote in Arkansas, Trump's Arkansas polling numbers may seem surprising, Barth said.

But the drop-off is in line with what is occurring elsewhere, Barth said.

On average, national polls this month have shown Trump trailing by 9.5 points, according to the Real Clear Politics average, which can be found at https://bit.ly/2NnNWYl.

"He's still doing so much better in Arkansas than he is in many parts of the country and in his national standing," Barth said. "I think when you think about it comparatively, it's maybe not quite as startling."

Trump has dismissed several of the recent polls that showed him behind. After CNN released its results, Trump campaign officials sent a letter demanding that it be retracted.

"The poll is intentionally false, defamatory, and misleading, and designed to harm the Donald J. Trump for President, Inc., campaign," they wrote in the letter, which can be found at http://tinyurl.com/ybphgarm.

The recent survey portrays splits within the state that are similar to those encountered elsewhere.

"We know from our internal data that the President is in strong position against a defined Joe Biden in all of the states we monitor," Murtaugh wrote in an email. "Public polls, especially state-specific polls, have always been notoriously wrong about President Trump. We are confident in his position."

The Biden campaign had not responded to a request for comment as of early Sunday evening.

There hasn't been much polling in Arkansas this election cycle. The Arkansas Poll, done by UA's Parry, is scheduled for October. The results of the Talk Business poll could spark additional polling as well, Parry said.

It's hard to imagine a road map to victory for Trump that doesn't include the Natural State, she noted.

"If he's losing Arkansas, he's losing the Electoral College," she said. "This isn't a state anyone has considered competitive."

"I'm not surprised that people are looking for something other than what President Trump has given us. That was not shocking," he said.

Republican politicians who cling to Trump may pay a price in November, he suggested.

Republican Party of Arkansas Chairman Doyle Webb expressed doubts about the findings, arguing the poll should have included more Republicans.

He also expressed reservations about the pollster's use of text messaging.

Rather than conducting the surveys over the telephone, participants were "contacted via text message and given a unique link to complete the survey online," the polling methodology noted.

The Talk Business survey comes as the nation is struggling with a pandemic, high unemployment figures and unrest in the wake of the death of George Floyd, a black man who died while a white Minneapolis police officer was kneeling on his neck.

"Certainly the time in which the poll was conducted was both a very difficult time both in our nation and in our state's history, and that could have an impact on how federal officials are viewed," Webb said.

"It's a snapshot, and I do not believe that it reflects Arkansas as a whole," he added.