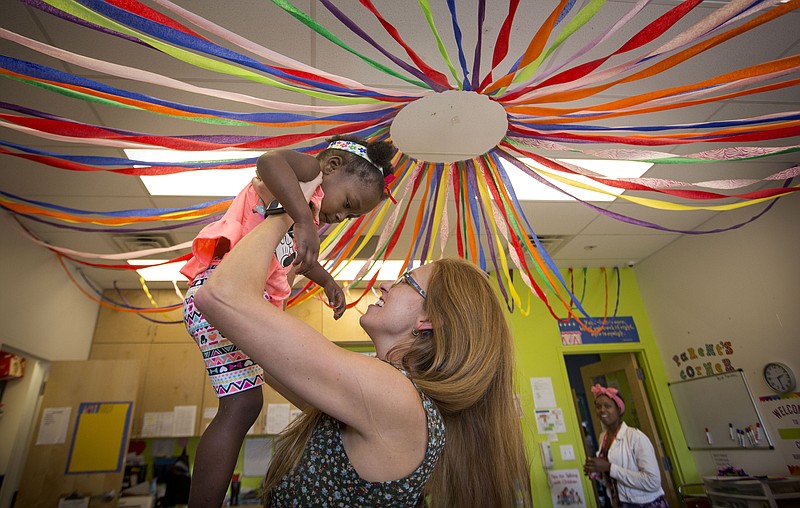 FILE — Then-executive director of Our House Georgia Mjartan plays with Our House Childrens Center student Porter Nelson during her daily rounds in 2017 at the shelter for working homeless families in Little Rock.

A quarter of Arkansas children live in poverty, part of a significant drop in the state's economic well-being measure in a national report released Monday.

The Kids Count report showed that Arkansas hovered at 40 among states for overall childhood well-being for the second-consecutive year.

The decline in the economic well-being subcategory means that in addition to more Arkansas children living in poverty, more children's parents lacked secure employment, more households with children carried high housing cost burdens, and more teenagers were not attending school and were without jobs.

The Kids Count report was compiled by the Annie E. Casey Foundation, a Baltimore advocacy and research group, based on data from 2018. It examines 16 indicators associated with health, economic well-being, education, and family and community.

A news release from the national group notes the report doesn't factor in changes to children's well-being from the coronavirus pandemic. The foundation is working on another report focused on the pandemic's effect on kids.

Massachusetts placed first in the ratings and New Mexico was last.

"Working to keep kids healthy and safe has never been more essential," said Lisa Hamilton, president and chief executive officer of the Casey Foundation in the release. "Having consistent, reliable data to guide our decisions will be critical as we continue seeking to ensure the well-being of children, families and communities throughout this challenging time and beyond."

Arkansas' rankings in the four categories were:

The drop in economic well-being likely stems from an increase in the number of children living in poverty, particularly black children, said Bruno Showers, a senior policy analyst for Arkansas Advocates for Children and Families. The state-level advocacy group researches and promotes policy to improve the lives of children.

The number of children in Arkansas who are living in poverty went up by about 15,000 to 171,000, according to information from Arkansas Advocates.

Showers said black children were disproportionately affected, which is in line with national trends that show more minority-group children live in poverty.

"It really is like white child poverty in Arkansas really didn't change between 2017 and 2018," Showers said. "Black children in Arkansas are suffering right now."

Past studies from the group on the health, wealth and education of black men and boys in Arkansas have shown that black children face systemic barriers that white children do not.

There are significant gaps in average wages, rates of infant mortality, rates of enrollment in advanced classes and disciplinary practices between black boys and white boys, often caused by policy decisions, past reports have shown.

"We need to talk more specifically about the race issue, and I don't have a silver bullet for that any more than I do any of the other social ills, but it is something that we should talk about," Showers said.

Nationally, about 18% of children were living in poverty, on average. Among black children, the rate was 32%.

Showers mentioned the possibility of adding an earned income tax credit to help alleviate poverty rates. Such a law would provide a state tax credit to families based on income, marital status and number of children, similar to the federal statute.

At least 28 states and Washington, D.C. have a state-level earned income tax credit.

The state also scored about 11% of high school students who did not graduate on time, lower than the national average of 15%.

In family and community indicators, Arkansas had the most teen births per 1,000 in the country, as it has for several years. A slightly lower percentage of children lived in households where the family head lacked a high school diploma – 81,000, or 12%, down from 13% in last year's data.

News releases regarding the report emphasized that the data did not take into account changing circumstances from the pandemic.

"I think we've been lucky so far in that the federal government's response has been relatively quick," Showers said of economic assistance approved by Congress and the president. But, he cautioned that unemployment rates still had hit record highs during the pandemic, and families likely have not seen all of the fallout from job losses.

"It doesn't need to be catastrophic, but if the federal government doesn't act, it's going to get worse and not better," he said.

CORRECTION: Arkansas ranked 40th overall for childhood well-being among states in the annual Kids Count report from the Annie E. Casey Foundation. An earlier version of this story and headline misidentified the ranking.