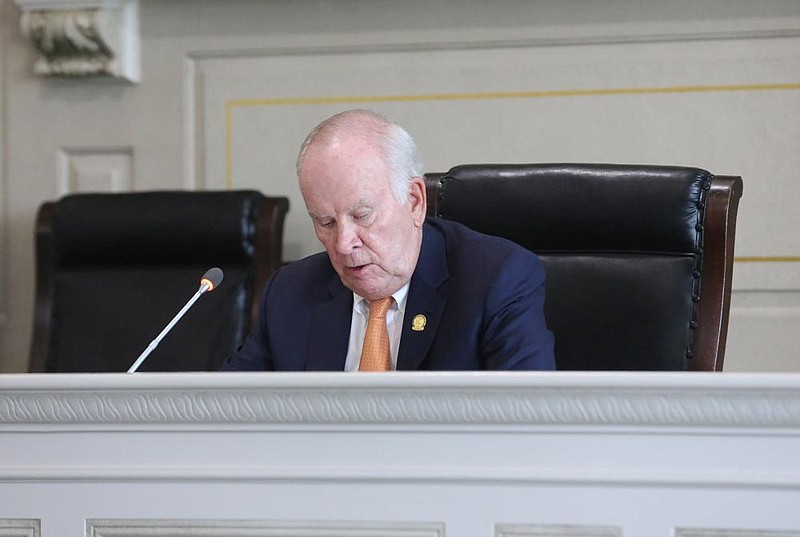 Alex Lieblong, chairman of the Arkansas Racing Commission, reads the scores Thursday announcing the racing commission’s intent to award a license for a Pope County casino to Gulfside Casino Partnership during the commission meeting at the state Capitol. (Arkansas Democrat-Gazette/Thomas Metthe)

Six members of the state Racing Commission voted Monday to find that the seventh commissioner, Butch Rice of Beebe, was biased in favor of a Mississippi company in his scoring Thursday of two applicants for the casino license in Pope County.

On Thursday, all the commissioners, after analyzing applications from Mississippi-based Gulfside Casino Partnership and Oklahoma-based Cherokee Nation Businesses, gave total scores of 637 for Gulfside and 572 for the Cherokees. But the 65-point difference was less than the 71-point difference in Rice's scores. The Cherokees complained about Rice's vote, so the commission met again Monday.

Rice disputed that he was biased and abstained from that vote.

After the vote on bias, the commission then, by voice vote, decided to delay action on how to proceed.

The commission approved a motion by member Mark Lamberth of Batesville directing Republican Attorney General Leslie Rutledge's office and attorneys for the two casino applicants to attempt to reach agreement on the way forward.

The commission's options include:

• Having the commissioners score the applicants again.

• Hiring a consultant to score the applicants, in which case the commissioners would decide whether to agree or disagree with the consultant.

The last two options would require the commission to issue new rules; approval of new rules could take between 90 days and six months, according to the attorney general's office.

"We should give the two parties a chance to sit down with the attorney general's office and see if they can come up with some sort of remedy to this, so that it's fair," said commission Chairman Alex Lieblong of Conway.

"I want to stress this, in my opinion, was about nobody's integrity," Lieblong said, referring to Rice. "I think it was the process that was flawed, that we didn't think out our voting system to allow something like this to happen.

"I got texts and emails from people that have nothing to do with this, and I have been on this commission a long time," Lieblong said. "But as far as I am concerned, this has thrown mud on the Arkansas Racing Commission, and it was not our intention for that to happen. But that's what happened."

Hiring a consultant would require the commissioners to expunge their scores of the two applications and develop new rules, said Brian Bowen, deputy chief of staff for Rutledge.

"If you are going to go that route, I would suggest you expunge the vote you had on the bias," said Butch Reeves, deputy attorney general for state agencies.

"You are going to be sued no matter what decision you make by some party or the other," Bowen advised the commission.

Afterward, Dustin McDaniel, a former state attorney general who now represents Cherokee Nation Businesses, said Monday afternoon in a written statement: "We are grateful the Commission reached the appropriate conclusion today, and we'll diligently work with their counsel to determine next steps.

"However, their options are severely limited by the rules that are now in place," he said.

According to the rules, the license must be issued 30 days from last Thursday, and it would be impossible to approve any new rule even on an emergency basis within the next 25 days, McDaniel said.

"It appears that their only real option is to remove the disqualified score from the panel's award of points and let the appeals proceed," McDaniel said.

Lucas Rowen, counsel for Gulfside Casino Partnership, said Monday in a written statement that as "the majority of the commissioners recently affirmed, Gulfside is the best choice for Russellville, Pope County and Arkansas."

At Thursday's meeting, Rice gave Gulfside a score of 100, compared with his score of 29 for the Cherokees. The 71-point difference in his totals was larger than the difference in the commissioners' scores overall.

The commissioners scored the applicants based on the businesses' experience with casino gambling; their timeline for opening the casino; proof of financial stability and access to financial resources; and summary of the proposed casino. Each category was assigned a maximum of 30 points except for the timeline, which was weighted at 10 points.

Rice told the Arkansas Democrat-Gazette on Thursday that he believes that Gulfside Casino Partnership is a better fit for Russellville, Pope County and Arkansas. He said Gulfside wants to build a larger casino in Pope County than Cherokee Nation Businesses envisioned, and that would create many more jobs and more tax revenue.

McDaniel filed an affidavit Friday alleging that Rice was biased toward Gulfside. The commission responded to the complaint by announcing the special meeting for Monday morning.

McDaniel told the commissioners Monday that Reeves warned them that to have a huge difference between the scores of two applicants could demonstrate the scoring was arbitrary and that a commissioner had his mind made up before he got to the meeting.

"And that is exactly what happened with Commissioner Rice's scores. His scores were so widely divergent on all four criteria that it evidences bias, and he has taken more than one action to ensure that Gulfside would not lose and could not lose this license," he said.

"The standard is whether or not there is a reasonable suspicion of unfairness, the standard that the Supreme Court will implement in reviewing what you do today," said McDaniel. "If you find [that], then Mr. Rice's scores must be disqualified.

"There is a big, big difference between bias and corruption," he said. "I respect Mr. Rice as a person and as a professional and the professional and charitable works that he has done and his service to the state. I have no reason to accuse him of any unlawful intent, and I am not asking you to stand in judgment of him as a person or of his character as a man."

McDaniel said he wanted the commissioners to exclude Rice's scores.

"This 71-point scoring differential stands out like a sore thumb," he said.

Rice, who shed tears during his testimony, noted that Republican Gov. Asa Hutchinson asked him to be on the commission.

"I told the governor that I would do what was right, and every decision that I made, I promised him it would be a thought-out decision," Rice said.

He said he has donated almost $2 million to charities in Arkansas.

"But the personal attacks that Dustin McDaniel has on me is relentless and totally uncalled for," said Rice. "He doesn't know me, and he doesn't know my character."

Rice said he was not biased.

"Guys, I swear to you I did not vote, I did not cast anything intentionally to harm either casino," he said.

Rice acknowledged that his scoring was a lot different than any other commissioner's scoring of the two applicants, and he said there was confusion about the scoring.

"I didn't go in there thinking that I got to make this [scoring] close," he said. "If I had thought that, we wouldn't be here today. I went in there to score each line individually, and that's what I did."

Rice added, "We needed a casino that had the marketing capability, that would recruit from Oklahoma [and] Missouri, bring more people here, which means more tax revenue for the state of Arkansas, Russellville and Pope County, more jobs in a highly needed area for jobs.

"More revenue, more jobs, and for us looking at what is best for the state of Arkansas, I truly believe that's what the governor would want us to look at: more tax revenue for the state, the city and the county," he said.

Rice asked what he was supposed to do after he added up his scores for the Cherokees and they totaled 29.

"Add numbers to it, so it would cosmetically look good? That's not me, guys, and if that's what this commission wants, I will resign today because that is not me," he said. "I don't think it is fair that we had to score it with the thought process of 'we got to make this close so everybody will think we were not biased; we need to make this close so nobody will look at it.' ... I scored it the way I saw it."

After the meeting Monday, Rice issued a written statement: "I have nothing but respect for all of my fellow Commissioners and I appreciate the hard work of the Commission and its staff.

Gulfside and the Cherokees were the last two operators standing after all five original applicants -- including them -- were rejected by the Racing Commission in the first application period last year. All five were rejected for the license because none met the commission's rule in place at the time requiring endorsements from local officials in office when an application is filed.

Gulfside sued the Racing Commission because its application contained endorsements from local elected officials who had left office in December 2018.

Endorsements are required by constitutional Amendment 100, which allowed for new casinos in Pope and Jefferson counties and authorized the expansion of racetracks into full-fledged casinos in Hot Springs and West Memphis. The Jefferson County casino is under construction.

However, the amendment, which was approved by voters in November 2018, doesn't specify that endorsements must come from officials still in office.

The Cherokees resubmitted their application after being endorsed by the Pope County Quorum Court in August.

After Monday's meeting, Sen. Jonathan Dismang, R-Searcy, who was there, said the commission should slow down, understand its processes and have a more in-depth discussion with the attorney general's office on how to proceed.

"It looked like most of the things were done on the fly without [understanding] how Step A impacted Step B," he said. Dismang said he disagreed with the commission finding bias in Rice's scoring.

Hutchinson said late Monday afternoon in a written statement that "my priority has always been that any decision is made on the merits of the application."

"It is important to ensure each application receives a fair evaluation and the Racing Commission should take all necessary steps to make that happen," the governor said. "I have not expressed a preference in terms of process or results. I appreciate the Attorney General counseling the commission through the decision making." 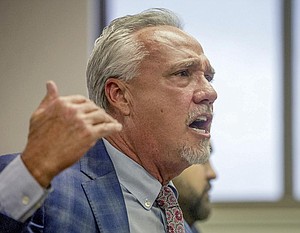 Photo by Stephen Swofford
Arkansas Racing Commission member Butch Rice makes a state- ment Monday about his scoring of the casino applicants for Pope County. “Guys, I swear to you I did not vote, I did not cast anything intentionally to harm either casino,” Rice told his fellow commis- sioners. (Arkansas Democrat-Gazette/Stephen Swofford) 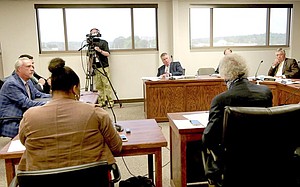