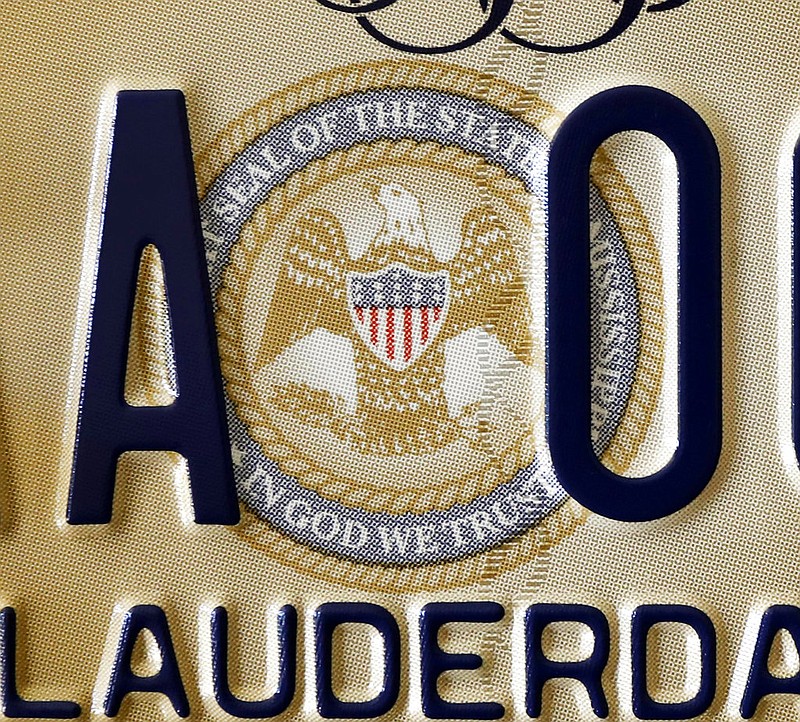 The Mississippi state seal, including the phrase "In God We Trust," is shown on a Mississippi license plate in Jackson in this May 10, 2018, file photo.

JACKSON, Miss. — Two of Mississippi’s top elected Republicans proposed Wednesday that the Confederate battle emblem be replaced on the state flag with the words “In God We Trust,” seeking a path toward unity in their state amid the backdrop of national protests over racial injustice.

“It is my personal belief that it is time for us to change our state flag to reflect the love, compassion and conviction of our people,” Attorney General Lynn Fitch said. “The addition of ‘In God We Trust’ from our state seal is the perfect way to demonstrate to all who we are.”

Mississippi has the only state flag that includes the Confederate battle emblem — a red field topped by a blue X with 13 white stars. White supremacists in the Legislature chose the design in 1894 as backlash for the political power African Americans gained during Reconstruction after the Civil War.

Mississippi voters chose to keep the flag in a 2001 statewide election, but the design has remained contentious. Elsewhere in the country, debate has sharpened as Confederate monuments and statues recalling past slavery have been toppled by protesters or deliberately removed by authorities amid a groundswell against racial inequities.

“In my mind, our flag should bear the Seal of the Great State of Mississippi and state ‘In God We Trust,’” Hosemann said. “I am open to bringing all citizens together to determine a banner for our future.”

Later Wednesday, Mississippi Republican Gov. Tate Reeves said for the first time that while he prefers having a statewide election to let voters choose a flag design, legislators could change the flag on their own.

The state’s annual legislative session is almost over, and it takes a two-thirds majority of the House and Senate to consider a bill after the normal deadlines have passed.

“If they get those votes, a veto would be pointless,” Reeves wrote on Facebook. “The debate would be over, and the flag would change.”

Legislative Black Caucus members say lawmakers should remove the Confederate emblem because another statewide flag vote would be bitter.

“The emotional distress that the current flag perpetuates on people of color extends throughout the United States, casting us and having people to claim that we are backwater and retrograde,” said the caucus chairwoman, Democratic Sen. Angela Turner Ford of West Point.

Another Republican statewide elected official, Auditor Shad White, said Mississippi needs a flag “that is more unifying than the one we have now.”

Republican state Sen. Chris McDaniel of Ellisville is among those saying Mississippi should keep its flag and people should resist efforts to remove historical monuments.

“Whether you acknowledge it or not, the American Left is waging war against us,” McDaniel said Tuesday on Facebook. “They consider the founding to be illegitimate, our history to be tainted, and our republic as inherently evil. They will not stop.”

In a newspaper ad funded by the state chamber of commerce, dozens of business executives said Wednesday that the Confederate battle emblem needs to be removed from Mississippi’s flag because it “perpetuates negative stereotypes of our state.”

The chamber, called the Mississippi Economic Council, said for years that Mississippi should change its flag. The group said a new flag without Confederate images would boost economic opportunities and improve the quality of life.

“The current flag is harmful to Mississippi’s image and reputation for those outside our state and is hurtful to many Mississippians,” the group said in the ad published in the Clarion Ledger.

All eight of Mississippi’s public universities stopped flying the state flag years ago because of the Confederate symbol. The universities’ leaders were at the Capitol on Wednesday trying to build support for a legislative vote on changing the flag.

“We know this symbol is holding us back in the eyes of citizens all across this nation,” said Mississippi State University President Mark Keenum. “And citizens around the globe view that symbol as a symbol of hatred and racism.”