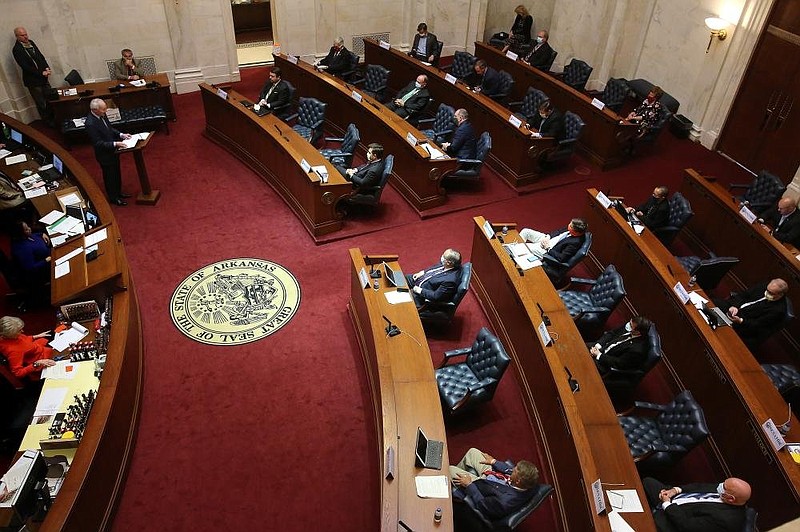 FILE: Gov. Asa Hutchinson gives the State of the State address on Wednesday, April 8, 2020, in the senate chamber of the state Capitol in Little Rock.

LITTLE ROCK -- Legislative leaders signed off on Gov. Asa Hutchinson's request to tap the covid-19 rainy-day fund for about $2 million for the crisis stabilization unit programs in four counties in Arkansas.

The programs provide a needed alternative to jail for people who are suffering a mental health crisis and are behaving in a way appearing threatening to others, state Department of Human Services Secretary Cindy Gillespie said in a letter to Larry Walther, secretary of the Department of Finance and Administration.

Gillespie's department requested $2 million for the programs, "recognizing the hardship [that] significantly reducing ... funds would have on the operations plans of these pilot programs," Gillespie wrote.

Scott Hardin, a Finance Department spokesman, said Tuesday that $2.5 million was originally allocated through the Revenue Stabilization Act in Category B for the units and "it was cut through the revised forecast.

"This request will help fill that cut," Hardin said.

The crisis stabilization units had $1.4 million from a previous rainy-day release, along with $2.1 million from a carry-forward of unspent general revenue from the prior year, he noted.

With $2 million in covid-19 rainy-day money, the estimated reimbursement will be allocated with $532,000 apiece for Craighead, Pulaski and Washington counties, and $440,000 for Sebastian County, Gillespie said.

In a March 26-28 special legislative session, the Legislature and Hutchinson enacted legislation to transfer $173 million in surplus money to the new covid-19 rainy-day fund. The governor is allowed to tap the money with the approval of at least two of three legislative leaders in both the House of Representatives and Senate.

About $148.6 million remains in the fund after the move, Hardin said.