Virus cases unchecked, he testifies by Compiled by Democrat-Gazette Staff From Wire Reports | June 24, 2020 at 7:28 a.m. 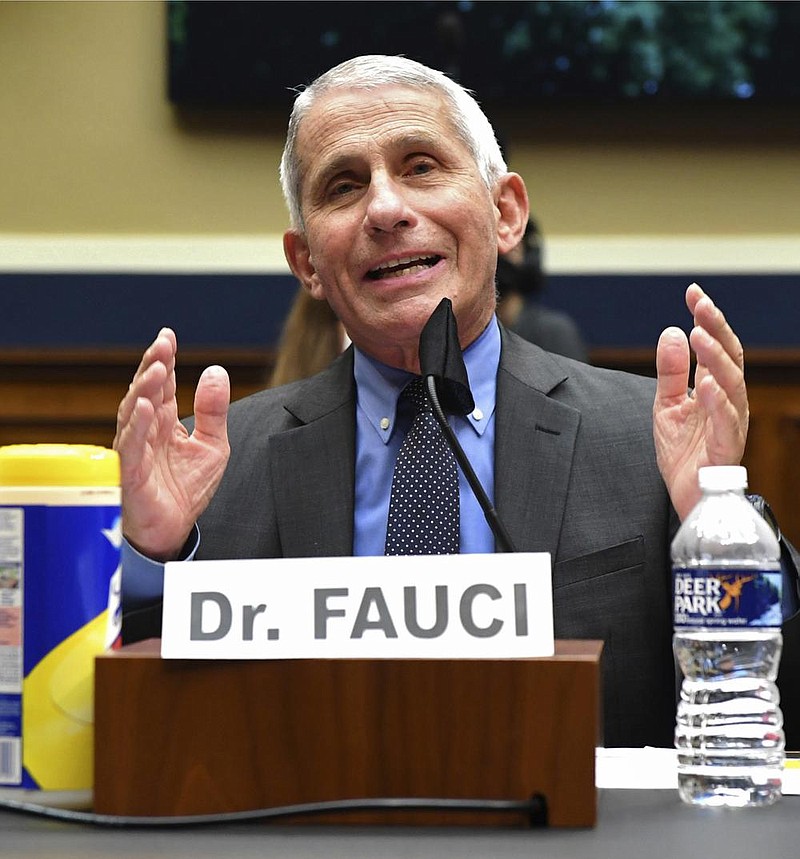 In his testimony to lawmakers Tuesday, Dr. Anthony Fauci painted a darker picture of the coronavirus threat than President Donald Trump has presented. More photos at arkansasonline.com/624virus/. (AP/Kevin Dietsch)

WASHINGTON -- Dr. Anthony Fauci, the nation's top infectious disease expert, told members of Congress on Tuesday that the nation does not yet have the coronavirus under control and is seeing a "disturbing surge" of infections in some parts of the country.

Many Americans are ignoring social distancing guidelines, and states are reopening without adequate plans for testing and tracing the contacts of those who get sick, he said.

Fauci's assessment, delivered during a lengthy hearing before the House Energy and Commerce Committee, painted a much grimmer picture of the coronavirus threat than the one given by President Donald Trump, who said last week that the virus that had infected more than 2 million Americans and killed more than 120,000 would just "fade away."

"The virus is not going to disappear," Fauci said.

To the contrary, he said the next two weeks will be critical to controlling the spread of the virus, and he warned of a dangerous situation looming for this winter, when the regular flu season will intersect with the coronavirus, producing "two respiratory-borne infections simultaneously confounding each other."

Fauci also delivered a stern message to young people, saying they could endanger others by ignoring the coronavirus threat. And after mass protests for racial justice that have drawn large crowds and a campaign rally that Trump held in Tulsa despite public health warnings, he gently suggested that Americans need to do a better job of taking precautions to reduce the virus' spread.

Fauci's testimony, and the testimonies of three other doctors who have helped lead the government's coronavirus response, cast a dark cloud over the sunny accounts offered by the president as he has portrayed the United States as a nation bouncing back from the brink.

Shortly before the hearing began, Trump used Twitter to complain that he was not getting credit for his response to the virus, noting that Fauci, "who is with us in all ways," has "a very high 72% Approval rating" -- much higher than the president's, which stands around 41%.

Fauci, who has run the National Institute of Allergy and Infectious Diseases since 1984, was the only witness who is not a political appointee of the president's. But the others -- Adm. Brett Giroir, the assistant secretary for public health; Dr. Stephen Hahn, the commissioner of food and drugs; and Dr. Robert Redfield, the director of the Centers for Disease Control and Prevention -- struck a similarly somber tone.

Redfield called the pandemic "the greatest public health crisis our nation and our world have confronted in more than a century," and one that had "brought this nation to its knees," cautioning that when it coincides with flu season this year, hospitals and health workers would face a tremendous strain. Getting a flu shot, he said, would be even more important this year.

"This single act will save lives," Redfield said.

Fauci told members of Congress that he was "cautiously optimistic" that an effective vaccine will be available to the American public by the end of this year or the beginning of next year.

The government is providing extensive financial support to 14 vaccine candidates.

"Although you can never guarantee at all the safety and efficacy of a vaccine until you test in the field, we feel cautiously optimistic based on the concerted effort and the fact that we are taking financial risks to be able to be ahead of the game so that when ... we get favorable candidates with good results, we will be able to make them available to the American public" within a year of when officials began researching a vaccine in mid-January, Fauci said.

Hahn said his agency intends to use "appropriate flexibility" in employing regulatory tools to provide guidance to researchers and companies working on vaccines and drugs for covid-19, the disease caused by the novel coronavirus. But he said "data and science will dictate" when the FDA approves safe and effective products to prevent and treat the disease.

Hahn also said the agency has launched a "comprehensive" review of all its responses to date involving the coronavirus. The goal, he said, is to keep "what is working well" and to adjust policies that are not producing the desired result.

The FDA has been criticized for initially being slow to clear diagnostic tests for covid-19 from academic laboratories and then being too lenient on antibody tests. The agency has since adjusted both policies.

In their testimonies Tuesday, all four doctors contradicted the president's assertions about testing, saying that despite Trump's claim at the rally in Tulsa that he had asked "my people" to "slow the testing down" because increased screening was revealing more infections, making the country look bad, they knew of no such request.

When asked by U.S. Rep. Greg Walden of Oregon, the committee's top Republican, whether Trump had ever instructed any of them to slow down testing Fauci, Hahn, Redfield and Giroir said no.

"None of us have ever been told to slow down on testing. ... In fact, we will be doing more testing," Fauci said.

"We are proceeding in just the opposite -- we want to do more testing and of higher quality," said Giroir, who has been designated the "testing czar" by the president. "The only way that we will be able to understand who has the disease, who is infected and can pass it, and to do appropriate contact tracing is to test appropriately, smartly -- and as many people as we can."

Fauci and Redfield also expressed concern about Trump's decision late last month to withdraw from the World Health Organization, saying that they had maintained long-standing relationships with the WHO even as the White House moved to punish it over its relationship with China.

Contrary to statements from Trump and Vice President Mike Pence that the recent increase in infections was largely because of an increase in testing, Fauci said the surges in more than a dozen states were largely attributable to an increase in community transmission.

"A couple of days ago, there were 30,000 new infections. That's very disturbing to me," Fauci said.

Texas on Tuesday reported more than 5,000 new confirmed coronavirus cases, an all-time high and a milestone that comes as the federal government has stopped supporting some testing sites in the state.

Asked by Rep. Joe Kennedy, D-Mass., about the decision, Giroir, assistant secretary for health, confirmed that the Trump administration has "sunsetted" 13 testing sites, seven of which are in Texas. The move was done "with the full agreement of the governors," he said.

"We're not withdrawing the support for well over 2,000 sites," Giroir said. "We're just transitioning those 13."

Texas Gov. Greg Abbott on Tuesday stressed that the public "comprehend the magnitude of the challenge" ahead and, in a first since Texas lifted lockdown orders in May, empowered cities and counties to immediately put tighter restrictions on large gatherings.

Infection rates in Texas have doubled since late May, and on Tuesday, the state reached a 12th consecutive day of record covid-19 hospitalizations with more than 4,000. That amounts to a more than 170% increase in hospitalizations since Memorial Day, although Abbott and the Texas Hospital Association have stressed that there remains ample capacity for now.

However, some of the state's largest medical centers are beginning to carve out more space.

Texas Children's Hospital, the largest pediatric hospital in the United States, said Tuesday that it was admitting adult patients across its campuses to free up more hospital bed space in the Houston area. The number of covid-19-positive hospital patients in Harris County, which encompasses Houston, has nearly tripled since May 31.

[Video not showing up above? Click here to watch » https://www.youtube.com/watch?v=PA_wKuexf60]

Worldwide, more than 9 million people have been infected and more than 473,000 have died, according to a Johns Hopkins University tally. Experts say the true numbers are much higher because of limited testing and cases in which patients showed no symptoms.

In Britain, Prime Minister Boris Johnson announced a rollback of lockdown measures that will let millions in England back into pubs, cinemas, churches and hair salons starting July 4. The move came amid pressure from businesses to ease social distancing rules.

Some scientists worry that the move is too hasty, especially since measures like a track-and-trace system to stamp out any outbreaks aren't yet in place.

"This is far too premature," said David King, a former chief scientific adviser to the government. "To come out of [lockdown] too early is extremely risky."

By contrast, Germany was reimposing some lockdown restrictions in North Rhine-Westphalia state after more than 1,550 people have tested positive for coronavirus at the Toennies slaughterhouse in Rheda-Wiedenbrueck, and thousands more workers and family members were put into quarantine to try to halt the outbreak.

North Rhine-Westphalia Gov. Armin Laschet said people in Guetersloh and parts of a neighboring county will now face the same restrictions that Germany saw in March and April, including curbs on social gatherings and bar closures.

South Africa braced for an anticipated surge of covid-19 cases by opening a field hospital with 3,300 beds in a converted car manufacturing plant.

India has been recording about 15,000 new infections each day, and some states Tuesday were considering fresh lockdown measures to try to halt the spread of the virus among the country's 1.3 billion people. The government had lifted a nationwide lockdown to restart the ailing economy and give hope to millions of hungry, unemployed day laborers.

In Pakistan, the government is determined to buoy the frail economy by opening up the country even if crowded hospitals are turning away patients. New cases have also been rising steeply in Mexico, Colombia and Indonesia. 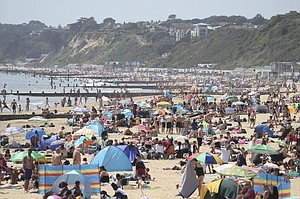 Photo by PA
People crowd the beach Tuesday in Bournemouth, south England. Prime Minister Boris Johnson announced a rollback of lockdown measures on pubs, cinemas, churches and hair salons starting July 4, and some scientists worry that the move is too hasty. (AP/Andrew Matthews)
ADVERTISEMENT