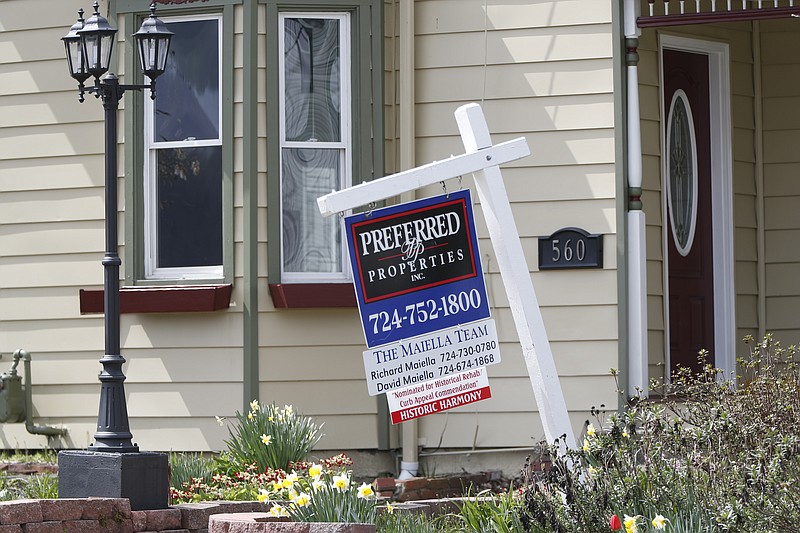 This April 16, 2020 photo shows a real estate company sign that marks a home for sale in Harmony, Pa. U.S. new home sales plunged 15.4% in March as the lockdowns that began in the middle of the month began to rattle the housing market. The Commerce Department reported Thursday, April 23, that sales of new single-family homes dropped to a seasonally ajdjusted annual rate of 627,000 last month after sales had fallen 4.6% in February. (AP Photo/Keith Srakocic)

WASHINGTON -- Sales of new homes rose a surprisingly strong 16.6% in May with the reopening of major parts of the country potentially fueling activity in the housing market.

That was a much better performance than expected. Many economists had forecast that sales would fall in May.

The sales results are further evidence that housing is proving to be a bright spot in the economy even with unemployment at levels not seen since the Great Depression.

Homebuilders are welcoming back buyers after social-distancing rules across much of the U.S. kept them on the sidelines in March and April. Newly built properties are gaining favor because previously owned houses are in short supply. Record-low interest rates have put new homes within reach of more buyers.

"The fact that we're reaching the levels we are in a pandemic and a recession is unbelievable," said Ali Wolf, chief economist at Meyers Research. "Low rates have tilted the equation toward some buyers actually being able to afford a new home."

In a sign of recent strength, the annualized pace of new homes selling in May before the start of construction was about 184,000, the highest in three months. The inventory of new houses for sale was the lowest since July 2018.

Purchases in the South increased 15.2% to a seven-month high. They jumped 29% in the West, the fastest pace in three months, the government's data show.

The new-home sales numbers come just one day after the U.S. reported a 9.7% plunge in May sales of existing homes.

The National Association of Realtors said Monday that the monthly decline pushed sales down to a seasonally adjusted annual rate of 3.91 million, the slowest pace since a homebuyers tax credit expired in October 2010.

Sales fell in all regions of the country, with the biggest decline in the Northeast where virus infections were especially heavy.

Sales in the Northeast slumped 13.9% from the previous month while sales in the West fell 11.1%. Sales slid 10% in the Midwest and 8% in the South.

Lawrence Yun, chief economist of the Realtors, said based on anecdotal reports, he believed May could turn out to be the bottom for the housing market with sales showing a V-shaped recovery in coming months. However, many private economists believe the recovery from the disruptions caused by the coronavirus will take much longer.

Information for this article was contributed by Martin Crutsinger of The Associated Press and by Prashant Gopal of Bloomberg News.