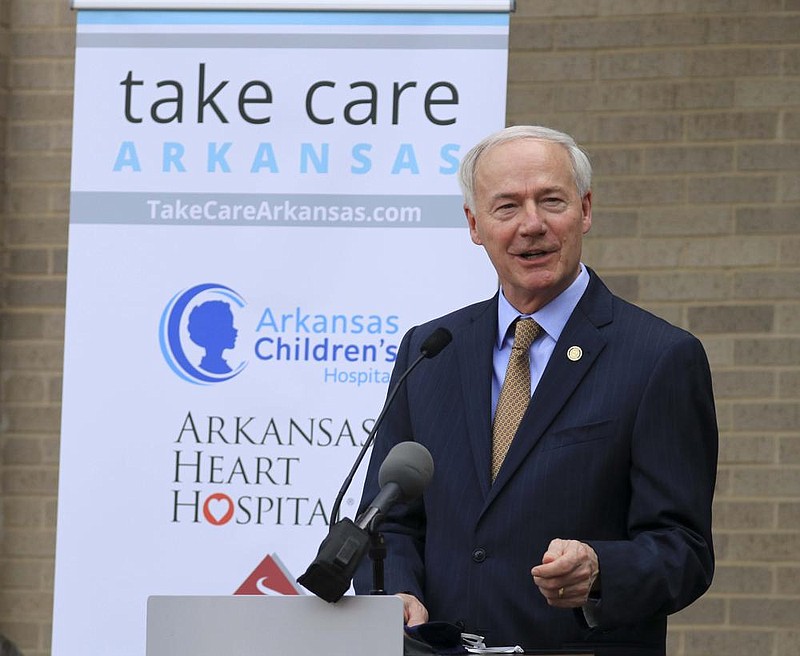 Gov. Asa Hutchinson said Tuesday that the state is preparing for a surge of covid-19 infections that a forecast predicts will result in the hospitalization of 3,300 Arkansans at its peak on Sept. 30.

The University of Arkansas for Medical Sciences College of Public Health has been working on the projections since March but has tried to parry away reporters' inquiries about them, emails obtained by the Arkansas Democrat-Gazette indicate.

The governor, who was conducting the state's daily covid-19 news conference while in Mountain Home, said he also hopes to prove the projection wrong by slowing the spread of the virus though testing and contact tracing.

Arkansans should also do their part by taking precautions such as keeping a distance from other people when in public and wearing masks when that's not possible, he said.

"These are very, very high numbers that you see," Hutchinson said referring to the forecast by UAMS's Fay W. Boozman College of Public Health.

The predicted number of hospitalizations is "a manageable number," he said.

"We'd have to do some acquisition and some significant shifting of resources, but we don't want it to get there," he said.

Hutchinson spoke as the state's count of coronavirus cases increased by 595, including 212 among inmates in prisons or jails.

Such cases are often added to the state's official total several days after the inmate is tested, after information from laboratory reports is entered into a state database.

The state Department of Health's count of virus deaths increased by 10, to 237, while the number of patients hospitalized with covid-19 increased by 11, to 248.

Fifty-seven of the patients were on ventilators, down from 61 a day earlier.

One of the emails obtained by the Democrat-Gazette was sent May 26 to Ashley McNatt, a spokeswoman for the college, from Dean Mark Williams, who wrote that he had "promised the Governor we would not release information to the media" about the projections. The college regularly updates those projections.

That email came in response to an inquiry from McNatt about where she could direct a Democrat-Gazette reporter who had asked about a projection by the college that Hutchinson had spoken about at one of his daily news conferences.

The same day, Health Secretary Nate Smith emailed Hutchinson's chief of staff, Alison Williams, to ask if the governor would object to the college releasing the information.

[Video not showing up above? Click here to watch » https://www.youtube.com/watch?v=1YG5jolJLQk]

"Early on the Governor had expressed reservations because their models, like many others at the time, had predicted very high numbers of hospitalized patients, ventilated patients and deaths," Smith said in the email. "That no longer characterizes their models, though."

Alison Williams, who is not related to Mark Williams, responded the next day that the governor would leave it up to UAMS officials to decide what they wanted to release.

Hutchinson "will not release from his office," she wrote. "If they do decide to release, please ask them to keep us in the loop so we can respond as necessary."

Responding to questions from the Arkansas Democrat-Gazette, UAMS spokesman Leslie Taylor said Tuesday that the dean didn't want the college to be "the focus" of information about the projections.

"He was afraid that would be a distraction," Taylor said in an email. "For that reason, he requested that the Governor and Dr. Smith be the ones to publicly release any modeling information."

Mark Williams said in a May 28 email to Smith that he had agreed to give interviews with reporters at the Arkansas Times and Arkansas Money & Politics.

"My understanding is they are not going to ask for the forecasts I have been sending out," he wrote. "They really want to know about modeling and how it [works]."

Asked about Mark Williams' promise not to release information about the projections, Hutchinson said in a statement, "I don't remember the specific conversation."

"These are internal projections for UAMS and Department of Health," Hutchinson said.

"The public can certainly weigh these projections along with numerous other models and assess both performance of policy makers and the response of the public in terms of compliance with public health guidance."

The college's June 12 forecast, cited by Hutchinson on Tuesday, predicted that the number of patients hospitalized in the state at any given time will reach a peak of 3,326 on Sept. 30 under an average-case scenario.

Under a worst-case scenario, hospitalizations would peak at 6,295 on Sept. 19.

The projection also predicted that the state would top 15,000 cases by the end of this month.

As it turned out, the state passed that mark Saturday.

"All models with which I am familiar are now forecasting the growth of covid-19 infections, hospitalizations, and deaths in Arkansas will continue along the current trajectory, and may result in high numbers around late September or early October," Mark Williams wrote in the June 12 report detailing UAMS' projections.

Health Department spokesman Danyelle McNeill said the state as of Tuesday had 8,917 hospital beds, including 2,533 that were not in use.

People with covid-19 accounted for 125 of the intensive care patients.

Hutchinson said the state has continued building its supply of ventilators.

"We have acquired some. We have more on order," he said. "We're preparing, even if it's a worst-case scenario, although we certainly hope that that will be avoided."

In preparation for a potential peak of 10,000 or more hospital patients, the Health Department in March and early April made plans to increase the state's hospital capacity by taking steps such as staffing unused hospital beds, and creating temporary hospital space in hotels and convention centers.

"They're still there," Smith said last week of the plans. "They could be implemented, but we're not anywhere near needing to do those."

Compared with the June 12 projections, the College of Public Health's forecast on May 24 was more dire, with hospitalizations peaking at 6,242 on July 18 under an average-case scenario or 13,042 on July 13 under a worst-case scenario.

Cases were forecast to reach 249,710 at the peak of the average-case scenario or 521,707 under the worst-case estimate.

Those projections were revised downward after the college received better data from the Health Department, according to the college's May 29 forecast report.

In a June 14 email to Jose Romero, the department's chief medical officer, Namvar Zohoori, the department's chief science officer, said the college's projections are "probably the closest we can get to a 'good' prediction for Arkansas, in that they are revised regularly and based on actual data that is provided to UAMS by [the Health Department] on a weekly basis."

Smith expressed skepticism, however, saying in a June 18 email to Romero that he didn't think the projections were "particularly informative."

"My usual bias is toward the empiric and with COVID-19 even more so," Smith wrote.

"Over the last couple of days we have had a clear downward trend in new cases in [Northwest Arkansas] with a slight downward trend in other parts of our state. Since the new cases in NW are driving our current numbers, it is most likely that over the next few weeks we will see the number of new cases for the state decrease and the number of active cases begin to decline. On the other hand, anything can happen."

The Washington Post on Tuesday listed Arkansas as one of seven states -- Arizona, California, North Carolina, South Carolina, Tennessee and Texas -- in which hospitalizations were at a record level.

As measured by the average number of new cases added each day per 100,000 residents, Arkansas continued to have one of the country's fastest-growing outbreaks.

As of Monday, the average of 452 cases added in Arkansas each day over the past seven days translated to a rate of 15 cases per 100,000 residents.

That was the fourth-highest rate in the country, according to data from the Covid-19 Tracking Project, which collects information from state health departments.

Arizona had the highest rate, with an average of 35.1 cases added each day per 100,000 residents.

The count of coronavirus cases on a state website increased Tuesday by 149 in Washington County, 88 in Hot Spring County, 45 in Lee County, 41 in Benton County and 25 in Pulaski County.

At the Ouachita River Unit, a state prison, in Malvern, where an outbreak of the virus was discovered over the weekend, 128 inmates were listed in a Health Department report Tuesday as having tested positive.

Three of the virus deaths added to the state's total Tuesday were in Washington County, raising the death toll from covid-19 there to 21.

The deaths also included the first one from the virus in Boone County. Clay, Columbia and Phillips counties each had their third virus death.

Bobby May, 77, of Russellville, died Tuesday at CHI St. Vincent Infirmary in Little Rock after testing positive for covid-19, according to a Pulaski County coroner's report.

He was in the hospital for two months, his son Robert May said.

"I do not believe he died from covid-19," Robert May said, adding that his father had a brain infection that required neurosurgery to remove.

Bobby May tested positive for covid-19 on Monday, and the suspected cause of death was listed as "infectious disease COVID-19" on the coroner's report.

The coroner listed a medical history of endocarditis, cardiac infection, hypertension and diabetes. No neurological issues were listed on the coroner's report.

"After his brain surgery, he went downhill. He didn't even know who everyone was," Robert May said. "He's been on life support for over a week. We went down yesterday, and they told us he had covid-19. We've been with him every day, by his side."

The family made the decision to remove him from life support Tuesday morning.

"We were not allowed to be at the hospital when he died," Robert May said. "My mother is 74. We haven't developed a fever. We're perfectly fine, but are quarantining for 14 days. We've notified the family so they don't come over. We don't have any symptoms, but I'm not saying we can't get it tomorrow."

Robert May said his father and mother, Frances May, were married for 56 years. They have one son and one granddaughter.

"He was a really good guy; a family man," Robert May said. "He liked hunting. We spent 30 years going to the deer camp together."

Robert May said his father "didn't like people" and was "selective in his crowd."

"If he liked you, he really liked you. If he didn't, he really didn't," Robert May said. "He saw through a lot of people."

Bobby May worked for 40 years at ConAgra Foods in Russellville.

"He was just a real good mentor to me. He never missed work," Robert May said. "He had years and years of perfect attendance. I'm the same way. I never miss work."

Hazel Floyd, a 75-year-old resident of Robinson Nursing and Rehabilitation in North Little Rock, died Tuesday in the intensive care unit at UAMS Medical Center, according to a Pulaski County coroner's report.

She was admitted to the hospital on June 18 with shortness of breath, and was then diagnosed with covid-19 and hypoxia.

The suspected cause of death was listed as "Infectious disease COVID-19" on the coroner's report. Floyd had a history of chronic obstructive pulmonary disease and Alzheimer's disease.

Floyd's health declined, and she was placed on comfort care by the family, according to the report.

This story has been corrected. A previous version incorrectly stated which entity of the University of Arkansas for Medical Sciences projects the peak health impact of the coronavirus pandemic in the state.