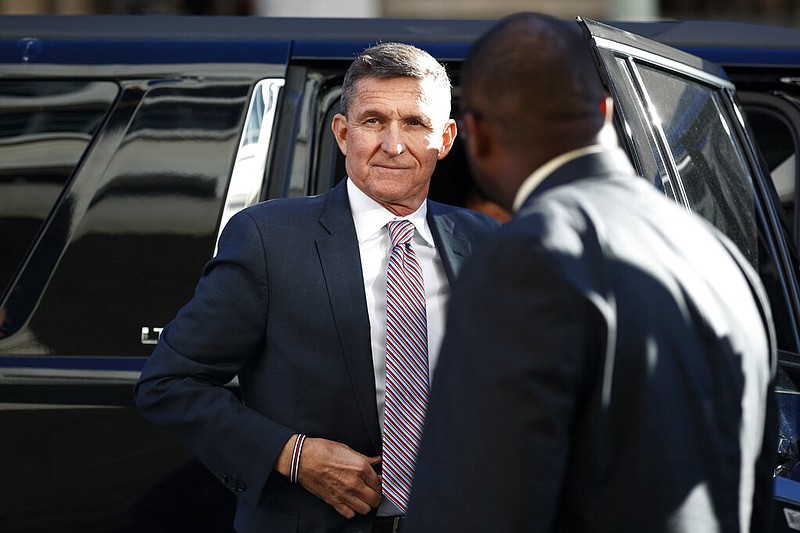 WASHINGTON -- A divided federal appeals court panel ordered an immediate end on Wednesday to the case against Michael Flynn, President Donald Trump's former national security adviser -- delivering a victory to Flynn and to the Justice Department, which had sought to drop the case.

In the ruling, two of three judges on a panel for the U.S. Court of Appeals for the District of Columbia Circuit ordered the trial judge overseeing the matter, Emmet Sullivan, to immediately dismiss the case without further review. The third accused his colleagues of "grievously" overstepping their powers, and the full appeals court has the option to review the matter.

The order -- a so-called writ of mandamus -- was rare and came as a surprise, taking its place as yet another twist in the prosecution of Flynn, who twice pleaded guilty to lying to FBI agents in the Russia investigation about his conversations in December 2016 with the Russian ambassador to the United States.

Flynn's case became a political cause for Trump and his supporters, who have tried to discredit the broader inquiry into Russia's interference in the 2016 election and links to the Trump campaign. Earlier this year, Flynn sought to withdraw his guilty plea, and Attorney General William Barr directed prosecutors last month to ask Sullivan to dismiss the case.

[Video not showing up above? Click here to watch » https://www.youtube.com/watch?v=V2czOeiU4l4]

But before ruling on that request, Sullivan appointed a former judge to critique the government's motion. Flynn's defense lawyer, Sidney Powell, then asked the federal appeals court to order Sullivan to shut down that review and terminate the matter.

Widely seen as a long shot by many legal experts, her strategy succeeded -- at least for now.

The case is "about whether, after the government has explained why a prosecution is no longer in the public interest, the district judge may prolong the prosecution by appointing an amicus, encouraging public participation, and probing the government's motives," wrote Judge Neomi Rao, a former White House official whom Trump appointed to the appeals court last year.

She added: "On that, both the Constitution and cases are clear: He may not."

Sullivan, who has a lawyer representing him in the appeals court, could ask the full appeals court to reverse the order. The full court also could invoke a rarely used rule that permits it to order a rehearing on its own, without any petition, if the judges deem the matter to involve "a question of exceptional importance."

Attorney Beth Wilkinson, who represents Sullivan, said Wednesday, "We have no comment at this time."

The ruling turned on a technical question -- whether, as a legal matter, Sullivan has the authority to scrutinize Barr's motivation or had to acquiesce to the Justice Department request that he rubber-stamp dropping the case without reviewing the motion's legitimacy.

Rao's decision not to permit Sullivan to scrutinize the Justice Department request to withdraw the Flynn charge was joined by Judge Karen Henderson, a 1990 appointee of President George Bush.

The fact that the two of them turned out to be on the panel had been seen as a good sign for Flynn because they have proved more willing than the majority of their colleagues to interpret the law in Trump's favor in other politically charged cases, like disputes over congressional subpoenas for his financial records and whether Congress may see secret grand-jury evidence from the Russia investigation.

But the ruling was nevertheless a surprise because both of them -- and Henderson in particular -- had asked many questions during oral arguments this month that seemed to signal skepticism about short-circuiting Sullivan's review.

A third judge on the panel, Robert Wilkins, a 2014 appointee of President Barack Obama, dissented. He said Sullivan should be permitted to complete his review of the prosecutor's actions and whether they are impermissible before deciding whether to grant the government's motion to dismiss, citing the unusual circumstances of the Justice Department's "abrupt reversal on the facts and the law" and the opacity of what happened.

In a dissenting opinion, he said his colleagues had made a series of mistakes that rendered a "dead letter" the portion of the rule of criminal procedure that says cases may only be dismissed with a judge's approval, or "leave of the court" -- at least when the defense and prosecution agree that a case should be dropped.

Instead, he argued, the law requires that Sullivan be permitted to rule -- and if Flynn and the Justice Department do not like what he decides, they can then file an appeal.

"The district court must be given a reasonable opportunity to consider and hold a hearing on the government's request to ensure that it is not clearly contrary to the public interest," he wrote. "I therefore dissent."

Later, at the White House, Trump told reporters he was happy for Flynn.

"He was treated horribly by a group of very bad people," Trump said. "What happened to Gen. Flynn should never happen in our country."

Flynn called into conservative commentator Rush Limbaugh's radio show and said the ruling was a good development for him and his family. But he also called it "great boost of confidence for the American people in our justice system because that's what this really comes down to -- is whether or not our justice system is going to have the confidence of the American people."

Kerri Kupec, a Justice Department spokeswoman, celebrated the unexpected result, writing on Twitter: "WIN in General Flynn's case." Asked for comment, Kupec added that the department was pleased with the panel's ruling.

The ruling came as Democrats question whether the Justice Department has become too politicized and Barr too quick to side with the president, particularly as he vocally criticizes, and even undoes, some of the results of the Russia investigation.

The House Judiciary Committee held a hearing Wednesday centered on another unusual move by Barr to overrule his own prosecutors and ask for less prison time for another Trump associate, Roger Stone. Barr has accepted an invitation to testify before the panel on July 28, a spokeswoman said Wednesday, and he will almost certainly be pressed about the Flynn case.

Trump fired Flynn in early 2017 for lying to Vice President Mike Pence and other colleagues about what he and the Russian ambassador discussed in December 2016. The FBI questioned Flynn about the calls again on Jan. 24, 2017, and he again denied what they had discussed.

Flynn later struck a deal with prosecutors working for the special counsel, Robert Mueller, to cooperate and plead guilty to one count of making a false statement to the FBI agents. The deal would resolve his liability for that crime as well as for failing to register as a paid foreign agent of Turkey in 2016 and then signing forms in 2017 lying about the nature of that work.

But after Flynn twice pleaded guilty, he switched last year to a new defense lawyer -- Powell -- who began accusing the FBI and prosecutors of misconduct. After Sullivan rejected her accusations as unfounded late last year, Flynn sought to withdraw his guilty plea. Barr then assigned an outside prosecutor to scour Flynn's case file, turning over internal documents showing that the FBI was aggressive in decisions related to questioning him.

Among other things, the documents showed that the FBI had decided to close an investigation into whether Flynn was a Russian agent before the issue of his calls with the Russian ambassador arose, at which point it used the fact that the inquiry remained open to interview him about the new concern. They also showed that James Comey, then the FBI director, violated bureaucratic protocol when he unilaterally sent agents to question Flynn, as deliberations remained unfinished with the acting attorney general about how to do it.

Powell used those documents to renew her allegations that law enforcement officials railroaded her client, even as the president indicated that he was considering pardoning Flynn. But in May, Barr intervened again, directing a prosecutor to seek to simply dismiss the case with prejudice -- meaning it could not be refiled by the Justice Department under any future administration -- on the theory that Flynn's lies to the FBI were not "material" to any legitimate investigation.

Barr's move was widely seen as extraordinary and a break with the Justice Department's approach in cases not involving a presidential favorite, fueling accusations of politicization. In particular, legal experts broadly disputed his notion that the false statements were immaterial, since they bore on the broader counterintelligence investigation into whether Trump campaign officials had coordinated with Russia's 2016 election interference.

Information for this article was contributed by Charlie Savage of The New York Times; by Eric Tucker, Mark Sherman, Colleen Long and Michael Balsamo of The Associated Press; and by Ann E. Marimow, Spencer S. Hsu and Felicia Sonmez of The Washington Post.