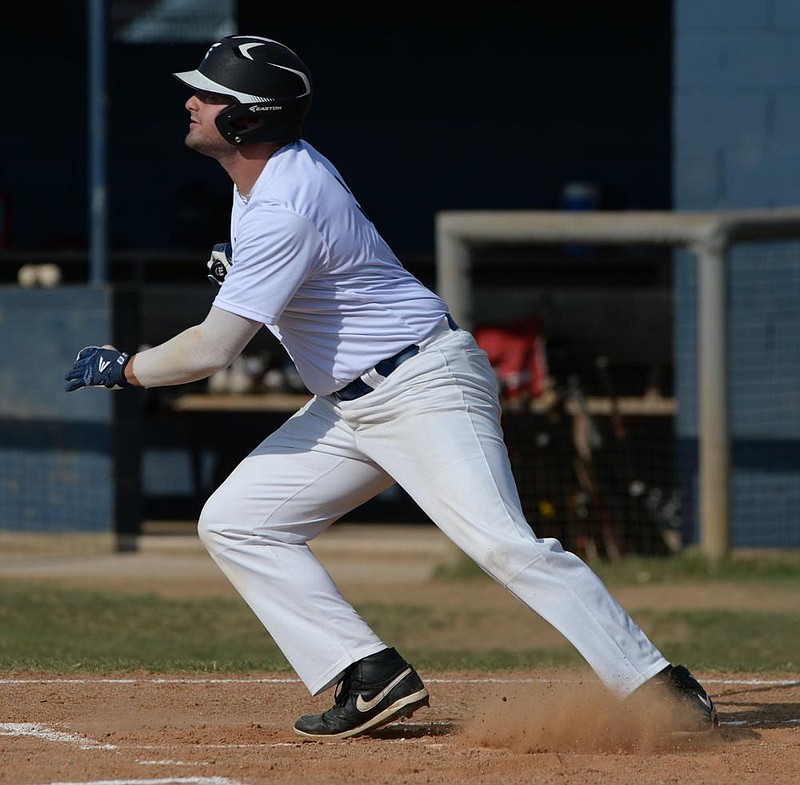 Johnson is a Bentonville graduate who played two years at Eastern Oklahoma State College after originally signing with the University of Arkansas. He transferred before his freshman season to Eastern Oklahoma, a junior college located in Wilburton, where the population is less than 3,000.

"Basically, we had a Choctaw gas station, a Subway [sandwich shop] and the school," said Johnson who hit 17 home runs as a freshman at Eastern Oklahoma. "But I wouldn't trade my experience there for the world. Any time I got bored at night, I could go hit and the coaches were there to work with me. I played a lot of games, got a ton of reps, and figured some things out at Eastern Oklahoma."

Johnson provides power for Perfect Timing Red, which lost 3-1 to Perfect Timing Black on Wednesday at Tyson Park. The first baseman and outfielder was 0 for 2 in his third game back after missing two weeks because a back injury. Colten Sagely went 3 for 4 for PT Black, which received strong pitching from Trey Jordan and Parker Edwards. PT Black scored three consecutive runs after PT Red took a 1-0 lead on a run-scoring double by Grant Jones in the fourth inning.

On Tuesday, Johnson hit a tie-breaking solo home run in the bottom of the sixth inning to help PT Red to a 7-4 victory over Sandlot Grey. Johnson went 2 for 2 and drew a walk in the game for PT Red, which overcame a 3-1 deficit after four innings.

PT Red coach Phillip Cebuhar said he was pleased to have Johnson's big bat in the lineup again. His home run on Tuesday soared over the scoreboard on the Ecclesia College Field at Tyson Park.

"I asked him to hit a home run to get this game going for us in the right direction and he was able to do that," Cebuhar said of Johnson, a left-handed hitting first baseman and outfielder. "He jumped in right away and had a couple big hits. He has such a good swing and he has a good approach at the plate, so I wasn't surprised when he hit the home run."

Johnson hit .361, with 17 home runs and 50 RBI as a freshman for Eastern Oklahoma. He was hitting .338 with 6 home runs and 22 RBI after Eastern Oklahoma beat Seminole (Okla.) 13-10 on March 12. The rest of the season was canceled because of covid-19, and Johnson said he expects to arrive in late July to continue his baseball career at Coastal Carolina, which is located in Conway, S.C. The Chanticleers burst onto the national scene in 2016 when they won the College World Series.

"They've got great facilities at Coastal, and they're still building on," Johnson said. "They're basically a Power 5 school and they play in the Sun Belt Conference with Arkansas State and Arkansas-Little Rock. My parents can come and watch me play for the next two years here in Arkansas and I know they'll come to visit me in South Carolina whenever they can."

Dan Merrill and Sam Replogle combined on a one-hitter to lead Sandlot Black to the victory.

Merrill tossed 5 hitless innings, struck out 4 and walked 3 to earn the victory. Sandlot Black jumped to a 3-0 lead after four innings and the pitchers did the rest.