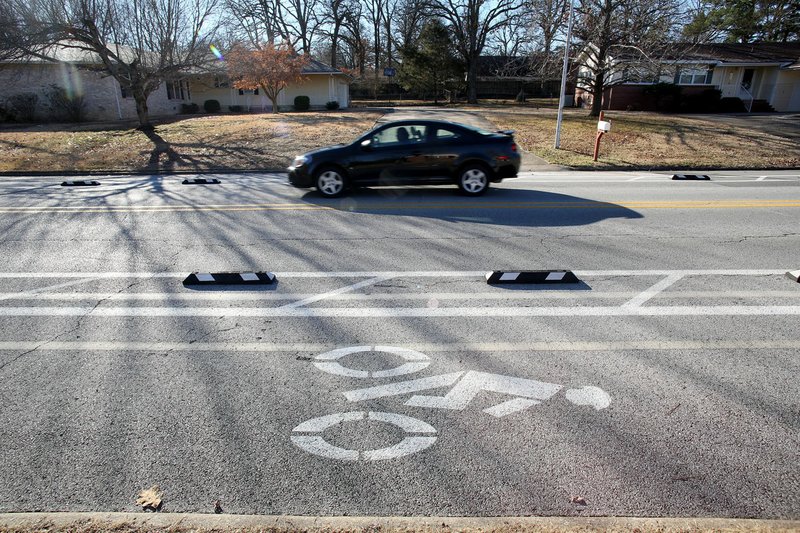 NWA Democrat-Gazette/DAVID GOTTSCHALK The temporary bike lanes are visible on Rolling Hills Drive Wednesday as traffic passes by in Fayetteville. BikeNWA, a regional bicycling advocacy organization, installed the temporary protected bike lanes at Rolling Hills Drive in November as part of a larger pilot project including Springdale and Eureka Springs paid for through a grant from the Walton Family Foundation.

SPRINGDALE -- The 2045 Metropolitan Transportation Plan for the area will include a variety of transportation options and will look at economic vitality, community livability and quality of life, planners were told Wednesday.

Staff of the Northwest Arkansas Regional Planning Commission are working on the plan. It's expected to be ready early next year and will serve as a guide for how the area will look and function with the projected population of 1 million residents in 25 years.

Goals include increasing safety for people walking, biking, riding public transit and driving. It will look at ongoing maintenance for the transportation system, preserving corridors and right-of-way for future corridors.

Maximizing the capacity and reliability of existing, regionally significant roads will also be part of the plan, along with access and congestion management techniques, public transit and biking networks. The plan will also look to minimize travel times.

The plan will talk about finding a dedicated, steady funding source for regional transit systems over the next 25 years.

"We'll be doing performance measures within the plan to look at how all of us work together, the cities, the counties and the state, to make sure that when we do construct roadways that we are looking at complete streets and access management, implementing the projects in our plan," said Tim Conklin, assistant director at regional planning.

The plan will have elements to protect the environment, like Northwest Arkansas Open Space Plan and the Cave Springs Karst study, which looked at improving storm water drainage management.

Conklin told planners a byproduct of the planning process has been to see just how rapidly traffic west of Interstate 49 is increasing, based on Arkansas Department of Transportation traffic counts.

"No surprise to anybody, the world is changing west of I-49 with the amount of traffic that is occurring. We're seeing significant increases in traffic count growth in Benton County and Washington County west of I-49," Conklin said. "Once again, numerous subdivisions are being built all throughout this area."

The plan will include traffic forecasting model, the base year will be 2018.