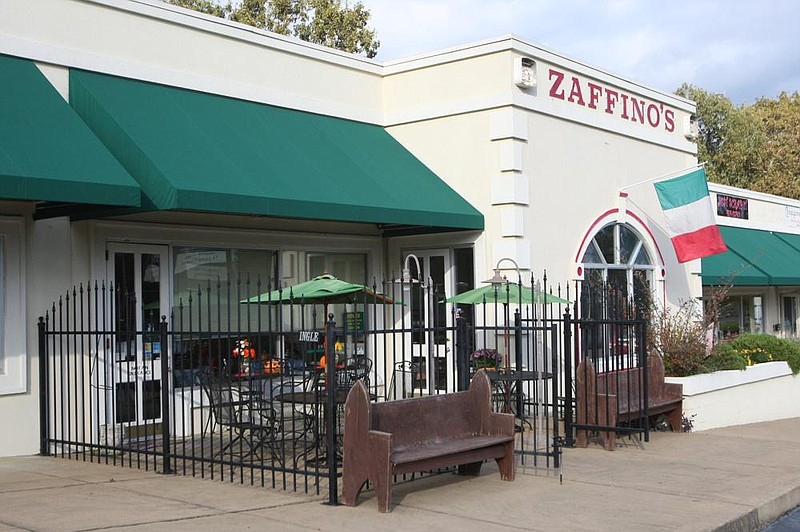 Zaffino’s, 2001 E. Kiehl Ave., Sherwood, in 2009: The restaurant closed this week with a simple note on its Facebook page, “Zaffino’s is closed permanently.” (Democrat-Gazette file photo)

Zaffino’s by Nori, 2001 E. Kiehl Ave., Sherwood, has closed. A post late Monday on the restaurant’s Facebook page (facebook.com/Zaffinos) simply states, “Zaffino’s is closed permanently. We appreciate the years of loyalty from our customers!” The preceding post, dated May 18, announced that the restaurant would be closing “for the next couple of weeks to restructure and reorganize.” It apparently never reopened. The same closure appears on the top of the home page of the website, zaffinosrestaurant.com. Nori Fryar, who had worked at Zaffino’s as a hostess and waitress for several years, bought it in 1997 and lent to the business her name as well as her authentic recipes (from her Italian hometown, Ponte Di Piave, not far from Venice, according to the website).

Tear-down last week of the former Subway at West Markham and Van Buren streets in Little Rock, right down to the bare lot, is the latest sign of the impending reopening on its original site of Black Angus. Owner Karla Creasey says the plumbing is finished and the electrical is going in this week, while “we still have to build out the drive-thru box and asphalt.” The target to open is now between July 15 and Aug. 1. The restaurant is taking over what had been Chi’s Too; tearing down the Subway provides access, via A Street, to a new drive-thru window. Before they tore it down, Creasey and her team discovered in the attic an original menu board and signs welcoming football fans (War Memorial Stadium is across Markham Street). See those photos and a video on the tear-down at the Facebook page (facebook.com/blackanguslittlerock). 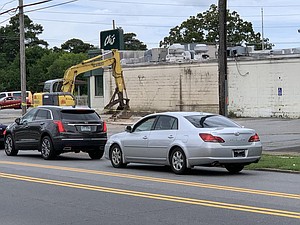 The piece of equipment is still there but the former Subway it tore down is gone, to make way for a drive-thru window in the Black Angus, moving into the former Chi’s Too building next door at Little Rock’s West Markham and Van Buren streets. (Arkansas Democrat-Gazette/Eric E. Harrison)

Brood & Barley, a second Flyway Brewing taproom that has gone into the former Core Brewing Public House at 411 Main St. in North Little Rock’s Argenta Arts District, is set to open today. Roughly half the menu will be available this week; the rest, we’re told, will debut next week. Flyway Brewing owner Jess McMullen has been routing several menu items through Flyway, including a Beer Cheese Fondue with sauteed garlic butter pretzel dumplings, and chef (and Philadelphia transplant) Brayan McFadden’s “Legit Cheesesteak,” shaved ribeye and a cheese sauce on an Amoroso roll (imported from Philly). Also expect a raft of B&B-specific brews. Initial opening-week hours will be 4-10 p.m.; eventually, sometime in mid-July, anticipate 11 a.m.-11 p.m. Monday-Thursday, 11 a.m.-midnight Friday-Saturday, with the kitchen closing an hour before. We were unable to track down a phone number — or McMullen — by deadline. 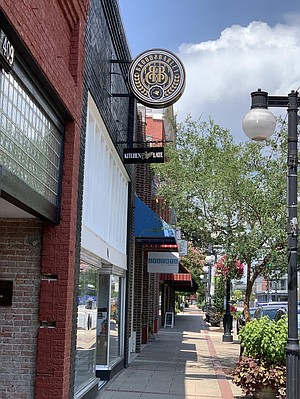 And speaking of pubs, Markham Street Grill & Pub, 11321 W. Markham St,, Little Rock, has also closed; an eagle-eyed colleague reports the landlord on Friday had padlocked the doors and put up a “for lease” sign. The phone number, (501) 224-2010, produces only a rapid busy signal.

And still speaking of pubs, as per a Monday post on Facebook (facebook.com/eastsixthbrewingco), what used to be Rebel Kettle Brewing is now East Sixth Brewing Co. The brewery/brewpub at 822 E. 6th St. in Little Rock’s East Village underwent a change in ownership/management with the ouster in March of founder John Lee and the takeover by founding brewer and co-owner Josh Davis and brewer Mark Sniff, who had previously worked at Flyway. “At the beginning of 2020, our brew team as well as our ownership changed,” explains the Facebook post. “The new leadership in the brewhouse wanted to roll out some new ideas, but they didn’t entirely fit with our current branding as Rebel Kettle Brewing Co.” The changeover is also showing up in new can designs, a colorful new exterior paint job, a goal of producing “delicious, wacky, and fun beers that twist styles in a community-driven, laid-back environment” and “in our marketing, in general.” A new, simpler menu — three sides, two burgers, two sandwiches, two salads, two desserts — debuted a couple of weeks ago. Hours are 11 a.m.-9 p.m. Tuesday-Thursday and Sunday, 11-10 p.m. Friday-Saturday. The phone number remains (501) 374-2791; the new website is eastsixthbrewing company.com.

One of the drawbacks of working from home and not getting out and about during an international pandemic is that we sometimes get behind on changes like the one involving North Bar and the former Newfangled Love Kitchen. The two have switched places in the Lakehill Shopping Center, 3812 John F. Kennedy Blvd., at the crest of North Little Rock’s Park Hill. What is now being branded as North Bar 2.0 has moved into the larger, three-storefront space that had previously housed several Mexican/Latin American restaurants, and Newfangled, now called North Bar Natural, with an all-vegan “100% plant-based” menu, now occupies the end cap space where the bar once was. Hours for both operations are 11 a.m.-2 p.m. and 5-8 p.m. Tuesday-Saturday. The North Bar 2.0 phone number is (501) 420-1117; the website, 501northbar.com; the Facebook page, facebook.com/501northbar. The North Bar Natural phone number is (501) 246-5094; the Facebook page has held onto its previous name, facebook.com/newfangledlovekitchen.

We’re still trying to track down the details, but a block or two south and across the street, we’re looking for the pending opening of The Filling Station Eats & Treats, a food truck court, on the site of a former gas station at 3623 John F. Kennedy Blvd., North Little Rock. The lot will provide room for four food trucks and a small patio outside with parking across the street. North Little Rock City Council gave its approval in February to Joy Evans and Kristi Scott for the project. We were unable to get through to the phone number — (501) 246-9750 — we found on the Facebook page, facebook.com/thefilling stationNLR.

And still in the same neighborhood, we’re told a new Shipley Donuts outlet is in progress at 4131 JFK, in the new Park Hill Pointe strip center. Its near neighbors include a Daylight Donuts at 4030 JFK.

The Facebook page (facebook.com/Starbucks -141068822595137) lists the Starbucks at 10721 Kanis Road at Shackleford Road, Little Rock, as “temporarily closed.” However, a check of the listed website for that outlet, starbucks.com/store/12878, returned this message from the chain’s store locator: “Whoops! We couldn’t find that store. Please search again.” The listed phone number, (501) 227-0770, had not been disconnected as of our deadline, but nobody answered it during business hours.

It’s not exactly a restaurant, but an outlet of the Gatlinburg, Tenn.-based Pepper Palace chain, billed as “the one-stop shop for ‘everything spicy,’” has opened in the Outlets of Little Rock, 11201 Bass Pro Parkway, Little Rock. The shop offers seasonings, spices, sauces and marinades, including hot sauce, salsas, gourmet olive oils, pickled items, beef jerky and barbecue sauces, according to a news release. Visit PepperPalace.com.

And Stone’s Throw Brewing is accepting donations for “our furloughed taproom staff,” via CashApp — at username $StonesThrowBrewing — or in person at either Little Rock location: the MacPark Brewpub & Biergarten, 402 E. Ninth St., and the Stifft Station Taproom, 3015 W. Markham St.