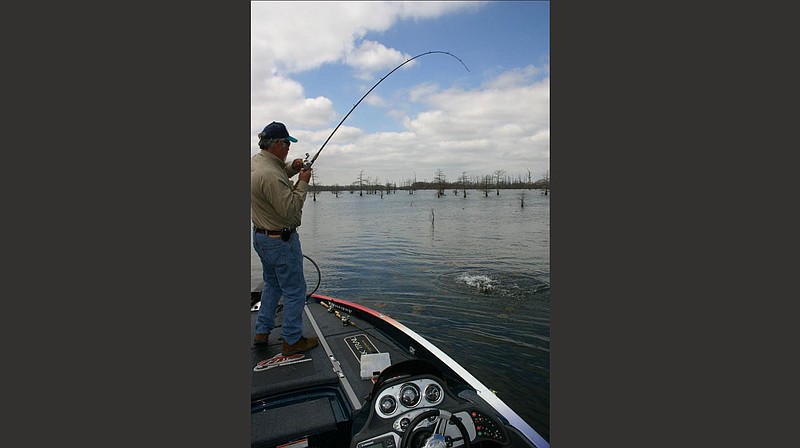 Swimming a jig over the top of submerged grass is a great way to catch big bass in the summertime. Strikes usually come in the form of massive boils on the surface. (Arkansas Democrat-Gazette/Bryan Hendricks)

In western Sebastian County between Hartford and Hackett is a 291-acre Arkansas Game and Fish Commission lake known as Sugar Loaf.

It is known for a lot of things, but good fishing isn't one of them. I fished it fruitlessly when I first moved to western Arkansas in the early 1990s, but I never caught anything worth mentioning. I held it in ill regard and eventually eliminated it from my rotation.

That was about the time I met Mitch Looper of Hackett. He owned several pizza parlors around Fort Smith and Van Buren, but he was best known for his uncanny talent for catching trophy largemouth bass. His favorite haunts were the myriad small lakes in western Arkansas like Lake Hinkle near Waldron, Waldron City Reservoir and Ozark City Reservoir. In the latter he caught a largemouth that weighed 14 pounds, 7 ounces.

Looper and I fished together constantly, and I learned more about bass fishing from him than from all of the professional anglers I've covered in the course of my career. Looper was one of the originators of the swimming jig technique, and I featured it and him in a 1997 Bassmaster article. This, of course, required a demonstration, and it also required catching at least two big bass for photos. By big, I don't mean 3- and 4-pounders. They had to match all of Looper's big talk.

"Where are we going, anyway?" I asked Looper as we drove down a lonely Sebastian County byway.

"Forget that noise!" I protested. "Why in the world do you want to go to that sorry, no-account mudhole?"

"That's what everybody thinks about Sugar Loaf, but that's because they don't know how to fish it," Looper said. "I'm telling you, man, when it is on, it is smokin' hot, and this is the day I have been waiting for to take you out there. I know you ain't never done any good out there, but that's gonna change today."

Looper was driving too fast for me to throw open the door and jump out, but I was sorely tempted. I felt betrayed.

The day was overcast, with a hard northwest wind and intermittent rain. According to Looper, Sugar Loaf was the perfect place to be on a day like that.

Here's why: At that time, the only viable fish cover in Sugar Loaf Lake were thick mats of aquatic grass that hugged large portions of the bank. Many of the lake's bass burrowed into the grass where they were largely inaccessible, and because the lake was so heavily fished, they probably ventured out only at night to feed. The grass was too dense for any kind of submerged lure, and trying to use any kind of lure with exposed treble hooks was out of the question. It was also too dense for punching with heavy jigs.

We launched Looper's boat at the ramp on Northshore drive just a few minutes before the brunt of the front hit. Looper threw his jig to the bank and swam it over the top of the grass. The first strike came quickly, and that bass weighed more than 7 pounds, as did the next one. I caught another 7-pounder, my biggest bass to date, and Looper boated another that weighed close to 8 pounds.

Pick your adverb; stunned, astonished, stupefied, gobsmacked. I was all of those things at that moment. Looper laughed and said he didn't mind if I shared his secrets.

"We can explain exactly how to do it from beginning of the cast to end of the cast, but 99% of the people that try it won't have any success because they won't be here at the right time," Looper said. "Everything has to be just right. That's why I only come out here two or three times a year."

Thanks to the popularity of swimbaits, the swimming jig has largely fallen into obscurity over the last two decades. Few anglers use it anymore, and a good percentage of those that do don't understand its nuances. It is, above all, a reaction bait. It is one of the few artificial lures that can go over and through thick cover without snagging, and it moves so fast that fish attack it from reflex.

To fish a swimming jig you need a heavy or medium-heavy action rod at least 6-feet, 6-inches long, a baitcasting reel with at least a 7.1:1 retrieve ratio and at least 20-pound test line. Small diameter, heavy-test braided line is advisable for backing because aquatic grass abrades and nicks monofilament line. I recommend a fluorocarbon leader because it impedes the jigs action less, and it is also less visible. Since you are not trying to punch through cover, you want a light jig that doesn't sink fast. You also want a bullet-style jig that will dart through grass and wood.

The most important thing is overcoming the traditional jig fishing mentality which emphasizes patience. A jig fisherman works a jig in a spot with the intention of provoking a fish to bite. Swimming a jig is a numbers game. It's all about making a lot of casts with the expectation that a percentage will get bit.

Essentially, you fish a swimming jig like a topwater lure. You have to retrieve it fast enough that it rides the surface and cuts a big wake. If it runs subsurface, it won't work nearly as well. You do not have to cast far, and that's part of the challenge. Fish often follow a swimming jig to the edge of cover before striking, and that often means getting bit almost at the boat. That can lead to missed strikes and break offs.

Strikes are usually a massive swirl. Set the hook hard and wrestle the fish into open water where you can manage it more easily. Fish that hit swimming jigs often dash to the boat, so you must reel quickly to take in the slack. Slack line allows a fish to shake the hook loose or throw it on a jump.

Again, swimming a jig is a specialty technique that usually works in certain situations. When the right weather occurs, give it a try.