PLATFORM DIVING: 'A Whisker Away' leaves me feline fine 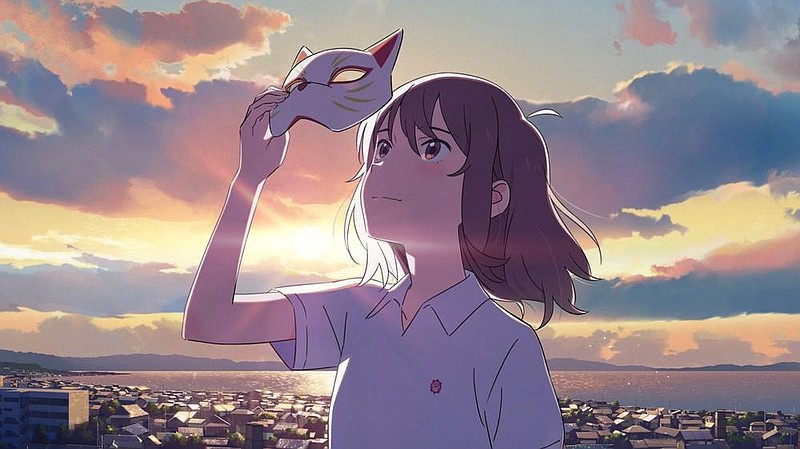 Miyo Sasaki tries to win the affection of her classmate Kento Hinode by transforming herself into an adorable kitty in the anime A Whisker Away, now playing on Netflix.

Thanks for sending all those "get well" cards after last week's Artemis Fowl review. They really made my hospital stay more tolerable. That movie almost killed me, but I'm happy to survive and review A Whisker Away.

Some folks might be a little antsy and triggered by the word "whisker" after having seen the spectacle that is Cats, but I'm happy to report the new animated movie on Netflix has cleared the name of cats everywhere ... at least until one of them knocks something glass off the counter again.

A Whisker Away actually got onto my radar in the strangest way. I'd just finished watching Brand New Animal (which was fantastic), and I happened to check my Google Calendar. I noticed there was a reminder set for A Whisker Away.

Seeing a reminder to watch something in my calendar app isn't anything new. When I see a release date I'm interested in, I make sure to put it in there to remind myself because I'm so forgetful. That's how I get entries like "Watch Umbrella Academy" on July 31 and "Watch Lucifer" on August 21.

The only problem here was I didn't remember adding A Whisker Away. I had to go find the trailer online to even know what it was about, a girl who uses a mask to turn into a cat to sneak closer to a boy she has a crush on.

Once I saw the trailer, I decided to watch the movie because it looked interesting. But how did the reminder get in my phone? The mystery deepens further because all the reminders I put in are super basic, "Call Serenah" or "Pay phone bill." This entry had the director's name (Junichi Sato) in front of the movie's title. That's something I never would have done. So, thanks to the furry who hacked my calendar, I guess.

A Whisker Away has had a bit of a tumultuous path, originally being scheduled to open in Japanese theaters before covid-19 hit. Then Netflix snatched it up. Don't get me wrong. I'm glad they did. Otherwise, there's no guarantee the movie would have been licensed for western markets.

Licensing is one of my biggest complaints with the Japanese animation (anime) industry in general. I hate how long it takes to slap on some English subtitles and bring a show or movie to western markets. It should be a simple process, as companies like Crunchyroll and Funimation have proven with their simulcast series that allow American customers to watch new anime episodes right after they're released in Japan.

But movies are much more difficult for some reason. Lupin III: The First was released in 2019. GKids picked up the licensing for this movie in March, but it has yet to materialize. I know we're in a pandemic, but put it on a digital platform. I've wanted to watch Detective Conan: The Fist of Blue Sapphire since I saw its trailer last year, but nobody licenses Case Closed movies anymore, leaving me with no legal options to watch it with subtitles. It's stuff like this that leaves me sympathizing with digital pirates.

Thankfully, A Whisker Away was brought to western markets pretty quick, although its English dub was delayed. That's fine. Anime fans get used to watching movies and shows with subtitles pretty quickly. Heck, I watch American shows with captions because it keeps me from missing occasional lines here and there.

The animation for A Whisker Away was beautiful. If we were in normal times, I'd have been happy to plop down $20 and watch it on the big screen at the Malco Razorback Cinema Grill & IMAX. I've enjoyed a few anime films there this year, like Ride Your Wave and Weathering With You. I had tickets to watch the Digimon movie there as well, but covid-19 ruined that.

Production for A Whisker Away was handled by Studio Colorido, Toho Animation and Twin Engine. I was familiar with the last two companies because of My Hero Academy: Heroes Rising (which I reviewed in this space) and Kabaneri of the Iron Fortress.

The lighting and colors are the strongest part of this movie. It's such a bright and colorful film, and the art alone inspires some real joyful tones. That's probably what I enjoyed most about the animation. That, and the design for Taro (the cat the main character changes into) was so adorable, just one of the cutest animated cats I've ever seen.

The story is creative and unique. I can't think of any other narratives where a teen turns into a cute animal to get closer to and spy on their crush. And some themes of this movie are actually pretty heavy, from the impact of divorce to the importance of humanity that is sometimes taken for granted.

A Whisker Away sounds like a cute movie on paper, but it's actually quite stressful as the audience learns there are consequences to turning into a cat for extended periods of time. It's not all lazy afternoons and naps. And when the main character, Miyo Sasaki, learns about the ramifications of her choices a little more than halfway through the film, it weighed heavily on my heart. I was invested in her story and struggles.

The narrative is paced patiently and takes time to build, which probably added to the stress I felt watching this movie. Consequences aren't undone with the snap of a finger or twinkle of an eye. This is likely due to Junichi Sato's directing, who guided the first two seasons of the Sailor Moon anime. Mr. Sato knows how to build up a heartfelt story, and trust me, nothing happens fast in Sailor Moon.

Where this movie fell short was its characters. The only dynamic characters in the entire movie were Miyo and her step-mother's cat Kinako. They provided interesting story arcs and pushed most of the movie's themes on humanity and the costs of giving it up.

And though I was invested in Miyo's story, she's a lot to take. She was obnoxious and hyper for a human girl (and maybe some of that was the cat bleeding through). My wife commented that she wouldn't be able to handle being in a room with the character in real life.

Maybe I'm being too harsh on her. She's a teen, after all, and I'm pushing 30. It's possible I've forgotten how hyper teens can be.

At least she had a personality. Every other character in the movie (except for Kinako) seemed to be a cardboard cutout (which is ironic, because they're sometimes depicted as stick people when Miyo doesn't want to focus on them).

The boy our protagonist has a crush on leaves me wondering what's to like. He's supposed to be a shy boy pushed by his mother to attend cram school and study hard when he just wants to make pottery like his grandfather, but the writing doesn't really do a good job of showing me that.

He comes across as dull and hateful toward Miyo (even if she is a little annoying). I really didn't find any redeemable qualities to his character. He was just kind of there. And it got worse the further down into the list of side characters you go. The villain is just an evil cat who tricks humans. What are his motivations and grand plans? Who knows? He shows up randomly to advance the plot as needed.

Miyo has a "generic best friend" classmate. There's not a lot of depth to any of the side characters

The magic wasn't really explained well, either. The basic premise is there's a big chubby cat who sells human masks that allow cats to turn into people. And masks that turn people into cats. When a character wants to transform, they have to wear the mask while doing a backflip, though that's not revealed until close to the end of the movie and seems random.

There's some kind of bargain system about lifespan and a vague deadline with a festival that leaves people transformed forever. The movie never really explained it.

And while I think the concept of an "other side" where cats live is interesting, the movie didn't spend lots of time exploring it. The art looked creative, but I was confused about this giant tree floating above Japan connected by an invisible bridge only cats can see. Does every country have one? Is Japan the only place with magic cats? How are the masks made? Why do some cats look anthropomorphic while others don't? It just left more questions than answers.

The movie has a runtime of 104 minutes. If it needed to add another five or 10 minutes to further develop characters and explain the magic, I wouldn't have complained.

One last detractor to this movie is a rather worrisome theme of obsession on the part of the protagonist. Miyo is hyper focussed on her crush, Kento Hinode. And it goes way beyond how one would write a "boy crazy" teen girl.

She is clearly obsessed to the point that it makes everyone around her uncomfortable, even the audience. And again, while a girl turning into a cat to secretly spend time with her crush sounds adorable on paper, it comes with some worrisome implementation in the film. I don't think it's healthy.

There were times watching the movie I'd just turn to my wife, and we'd cringe a little bit whenever this theme surfaced. It was very noticeable in some spots of dialogue.

I'm vaguely familiar with this movie having a soundtrack, but the score wasn't anything memorable. It didn't offend. It didn't charm. The music just did its job, blending into the background. I can't recall any of the music three days after having watched A Whisker Away.