Astros plan on moving on from scandal 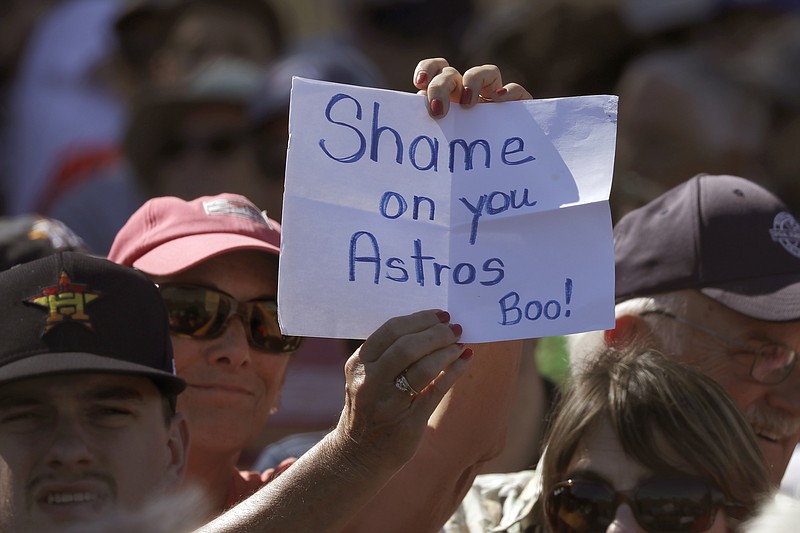 A fan holds a sign during a spring training baseball game between the Houston Astros and the Washington Nationals Sunday, Feb. 23, 2020, in West Palm Beach, Fla. (AP Photo/John Bazemore)

HOUSTON -- The first round of spring training was dominated by fallout from the Houston Astros' sign-stealing scam.

Players were plunked in exhibition games and heckled at every turn. Fans held signs mocking Houston players, and one man even banged on a trash can at an early workout in a reminder of how the Astros illegally stole signals during their run to the 2017 World Series title and again in the 2018 season.

With a second stretch of practices just around the corner after Major League Baseball committed to a 60-game season this week, will the AL champion Astros be able to move on from the cheating scandal after a layoff that lasted almost four months?

Are fans and opponents ready to forgive and forget? Or will the anger toward this team remain for its past transgressions?

Astros owner Jim Crane, who fired Manager AJ Hinch and General Manager Jeff Luhnow last winter after Commissioner Rob Manfred suspended both for one season as penalty for their roles in the scandal, hopes things will be better this time around.

"We broke the rules," Crane said. "We got punished. We accepted the punishment and we did what we did. We let two of our key guys go."

"We think we've handled it appropriately," he continued. "I'm not happy about the whole situation. We've got to accept what we did. We own it and I'll talk to the players about it one more time and hopefully we can move on from that and make sure that it doesn't happen again."

The Astros were almost certain to face hostile crowds on every road trip this year and knew they'd hear even more heckling as they began to play games that counted. But that might not be an issue now that the coronavirus pandemic has forced a shortened season that will -- at the very least -- start without fans in ballparks.

New Manager Dusty Baker, a respected MLB veteran, helped the team navigate reaction to the scandal during the first spring training, which was stopped on March 12 because of the virus. He doesn't know if the changed circumstances since then will make it easier to move on.

"I'm not really sure until we get there," Baker said. "This is all uncharted waters. None of us have been through this before in spring training, the emotions that were out there."

While catcalls from unhappy fans in the stands might not pose a problem for the Astros this year, they could have to deal with being intentionally hit by pitches when the season gets underway. Several Houston players were dinged in spring training games before the pause.

Some opponents had called for retaliation against the Astros, irritated that no Houston players were disciplined for their roles in the scandal. MLB's investigation found that Houston used the video feed from a center field camera to see and decode the opposing catcher's signs. Players banged on a trash can to signal to batters what kind of pitch was coming, believing it would improve the batter's chances of getting a hit.

Manfred addressed the subject of the Astros being intentionally hit by pitches as a means of retaliation this spring, saying it was "really dangerous" and won't be tolerated.

Despite his warning, the Astros could still be subjected to beanings when the season begins by those who still aren't over what they did.

But for now, the Astros can't worry about what might happen, so they will simply try to look ahead. And while Crane is optimistic they will be able to move forward, he knows the scandal will linger and hover over his team.

"This story will continue for a long time and it will always be discussed," he said. "And it's unfortunate we were right in the middle of that and I'm not happy about it and I've apologized numerous times. It shouldn't have happened ... we're sorry we did it. We've apologized to the fans. We just want to go play baseball now."

Baker, managing for the first time since being fired by the Washington Nationals after the 2017 season, is looking forward to doing just that.

"The guys are ready," he said. "They've got a great attitude. We want to go back to the top where we belong." 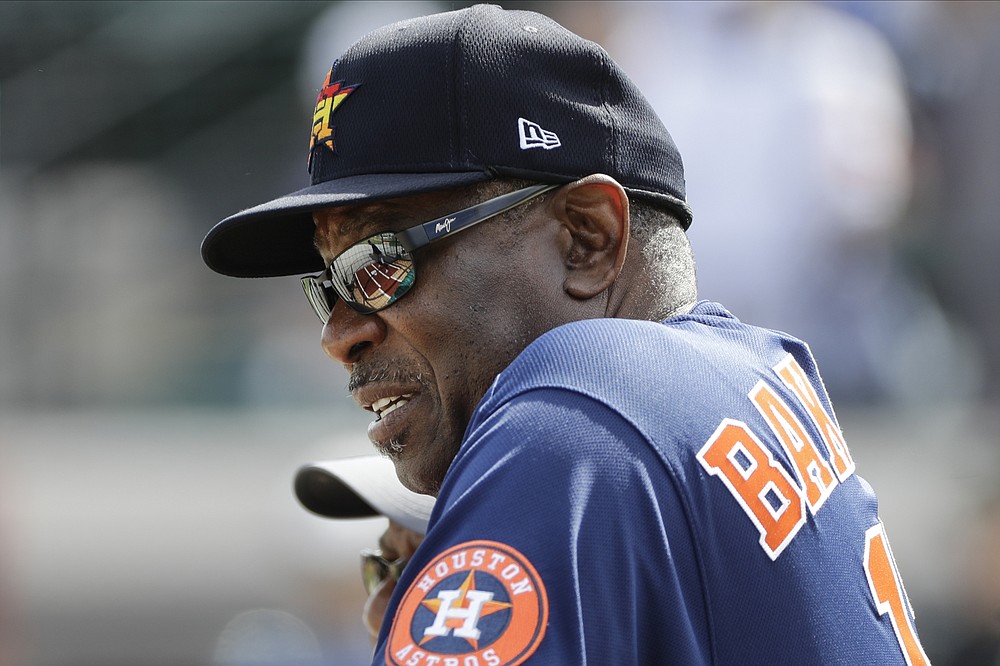 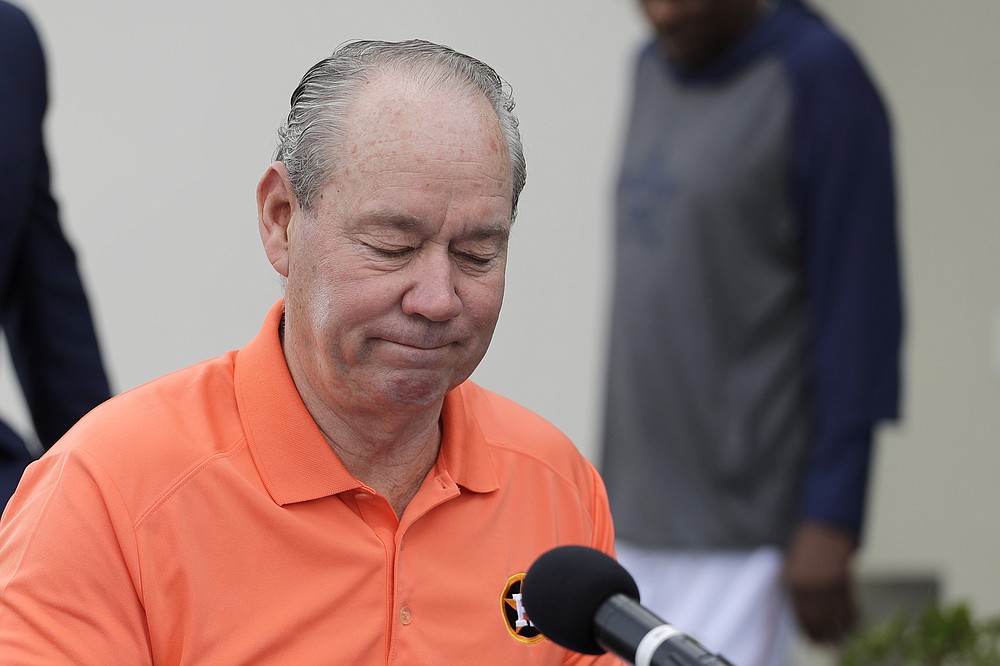 FILE - In this Feb. 13, 2020, file photo, Houston Astros owner Jim Crane sits down to speak to the media during a news conference before the start of the first official spring training baseball practice for the team in West Palm Beach, Fla. The last time the Astros and Nationals played, the Nationals were celebrating their World Series title in Houston. Since then the Astros have become the league's villains, with a sign-stealing scandal tarnishing their reputation and casting a shadow on their 2017 title.(AP Photo/Jeff Roberson, File) 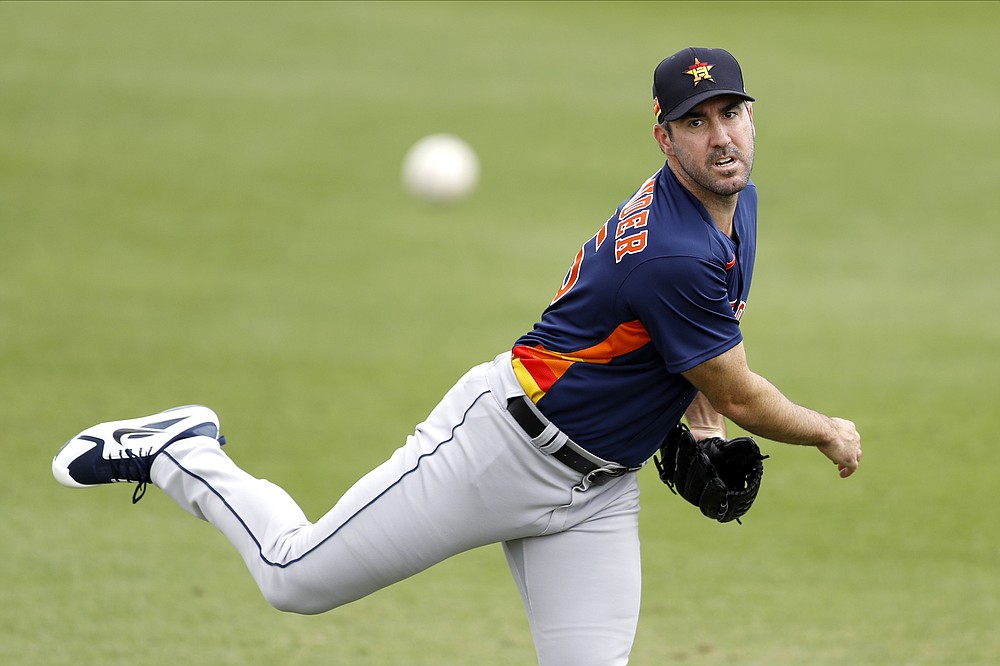 FILE - In this March 3, 2020, file photo, Houston Astros pitcher Justin Verlander warms up prior to the team's spring training baseball game against the St. Louis Cardinals in Jupiter, Fla. Verlander has resumed throwing as he recovers from March groin surgery. Houston manager Dusty Baker said Wednesday, April 15, that Verlander, who had surgery on March 17, is “doing great" and is throwing as he continues his rehabilitation. (AP Photo/Julio Cortez, File)
ADVERTISEMENT