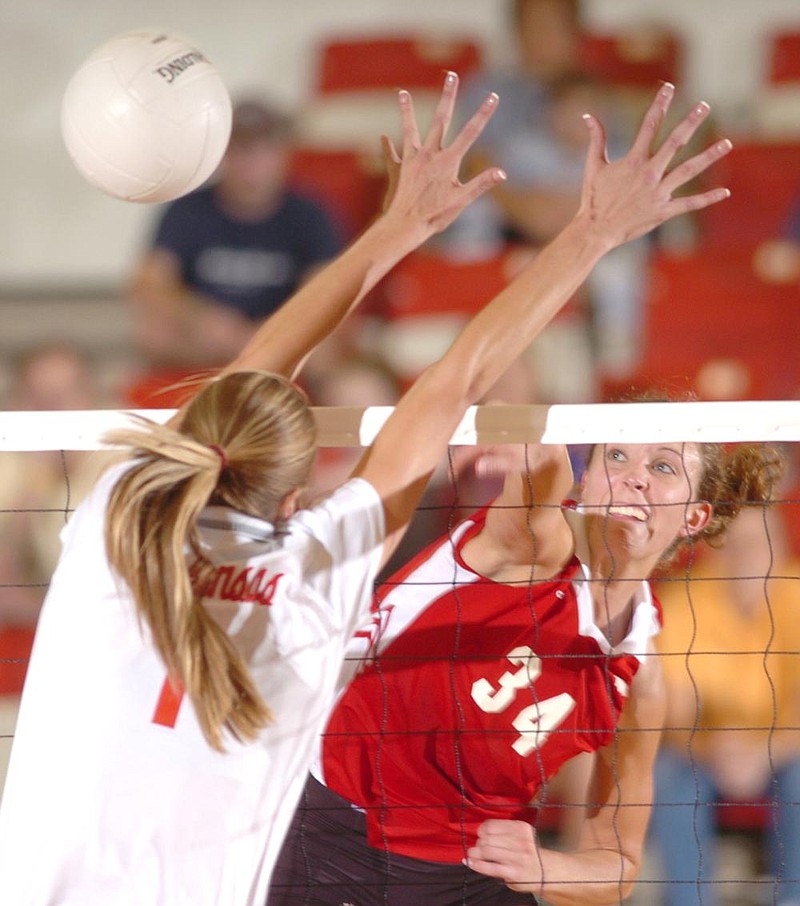 Jennifer Haaser Power (34) helped lead Fort Smith Southside to state championships in 1997-99 before going on to have four solid seasons at the University of Arkansas. (NWA Democrat-Gazette/Andy Shupe)

But the pressure of winning two state titles during her three years of high school didn't leave the gym.

Twenty-three seasons ago this fall, Haaser won the first of eight state volleyball championships during a dominant 17-year run (1997-2013). Jennifer Power was there for the first two.

"Honestly, he's so laid back," Power said from her Bentonville home. "One of the biggest differences was I grew up with it; I was at the gym all the time. I got to go on road trips with him.

"I grew up in that gym and in his classroom."

The team, then called the Confederettes before the school changed its mascot to the Mavericks, claimed their first crown during Power's sophomore season.

Seniors Naaron Branson and Mary Cate Hogue helped lead Southside to its first crown in 1997. But, even as the wins came in droves and expectations soared, there was very little "shop talk" around the dinner table at the Haaser home.

"I really appreciate that aspect as well," Power said. "He didn't bring it home with him. I knew what my job was; I knew what his expectation was. When we were home, we didn't really talk about it. We weren't really this huge intense sports family. He's very mathematical. He's on the bench and you're like, 'What's he doing? He was moving people around in his head.

"That's how he communicated."

Southside was so dominant in 1999, Power said it was just a matter of keeping the same routine.

"We played Mount St. Mary in the finals. We just needed to take care of business and do what we had done all year," she said. "We knew as long as long as we didn't completely fall apart, we had it."

Power, who later played collegiately at the University of Arkansas, watched the program win another crown in 2000, then three more between 2003-06.

"We had so much fun," Power said. "I remember my sophomore year I was playing with a bunch of older players, so I feel like I got a cool experience. It was exciting to be a part of it with the older girls.

"My senior year when we won, that was my class, and I got to share that with Amy Bullington and Audrey Burks ... I was one of the leaders. I feel like I got to have two different experiences."

One of four children raised by Terri and Steve Haaser, Jennifer and older brother Joel were involved in athletics.

Joel, a CPA in Jenks, Okla., grew up playing baseball before settling in as a high school basketball player. Older sister Tara Arterberry (Fayetteville) was a Dixie Belle; younger sister Julianna Tufts is the choir director at Siloam Springs.

"We had other children and they were involved in other activities," Steve Haaser said. "We lived life, and volleyball was certainly a part of it, but not everything."

It took another three years (2003) for Steve Haaser to raise another banner, but by this time Fort Smith's prominent junior Olympic program had taken hold thanks to founding members and coaches Jane Sargent and Dr. Deland Burks (whose daughter Audrey played on the '97 and '99 state title teams).

"I'm excited how much volleyball has grown in this area," Power said. "I get excited how far along it's come. It makes me really happy. The club programs are exceptional."

Power coached with Bentonville's Michelle Smith for a while before getting out of coaching to spend more time with her family. By 2007, Bentonville High had gone from mediocre to dominant in its own right.

"I remember at Southside, Bentonville had just gotten a team," Power recalled. "We'd have to drive all the way up there and we would play our JV players against Bentonville's varsity. To see how far they've come is exciting."

Power helped get the Arkansas volleyball program off the ground, though redshirting came with a story of its own. Power ranks ninth all-time in kills (1,298).

"(College) was a big adjustment," she said. "The speed of the game was huge -- that was probably the hardest thing for me. At the same time, it was fun to be challenged."

"We weren't having a big year my redshirt year," Power said. "We were over halfway through the season and he said I want to play you now, but it's not fair to you. I needed to get stronger and faster.

Power kept her redshirt and had four outstanding seasons (2001-04).

"She loved it; she loved playing and loved volleyball," Steve Haaser said. "She was easy to coach because of that. Obviously, she was talented and had a knack for that."

CREDENTIALS Power became the first in a long line of successful volleyball standouts, helping lead Southside to state championships in 1997-99. She became the second player in the program to earn a Division I volleyball scholarship. … Power helped lead the Lady Razorbacks to a 92-41 record during her four seasons (2001-04). She ranks ninth in all-time kills (1,298).

THAT’S WHAT SHE SAID “We had so much fun. I remember my sophomore year I was playing with a bunch of older players, so I feel like I got a cool experience. It was exciting to be a part of it with the older girls.”