Next period expected to be worse; durable-goods orders rise by Compiled by Democrat-Gazette staff from wire reports | June 26, 2020 at 2:03 a.m. 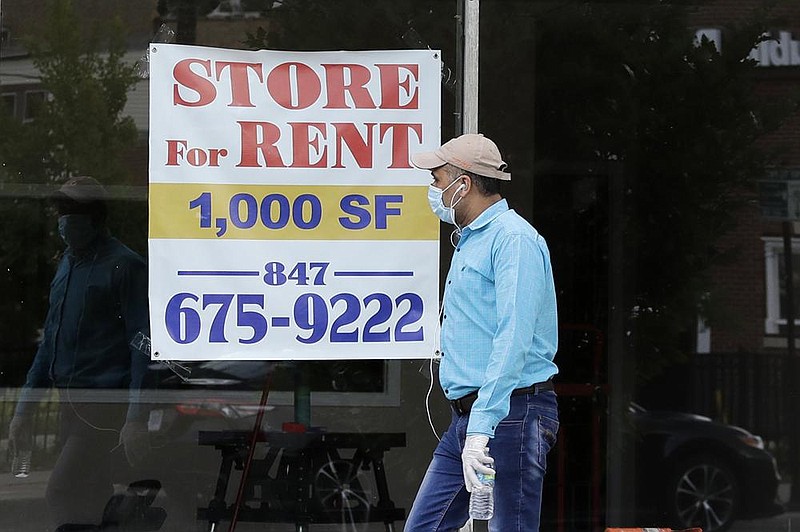 A “store for rent” sign is displayed at a retail property in Chicago earlier this month. The U.S. economy shrank in the first quarter by the most since the fourth quarter of 2008. (AP/Nam Y. Huh)

WASHINGTON -- The U.S. economy shrank at a 5% rate in the first quarter and a vastly worse performance is expected in the current three-month period, when the coronavirus pandemic began to spread across the U.S.

The Commerce Department reported Thursday that the decline in the gross domestic product, the total output of goods and services, in the January-March quarter was unchanged from the estimate made a month ago.

It was the sharpest quarterly decline since an 8.4% tumble in the fourth quarter of 2008 during the depths of the worst financial crisis since the Great Depression.

The first-quarter period captured just two weeks of the shutdowns that began in many parts of the country in mid-March.

Economists believe that gross domestic product has plunged around 30% from April through the end of this month.

That would be the biggest quarterly decline on record by a long shot: Three times bigger than a 10% drop in the first quarter of 1958.

But in a separate report Thursday, U.S. orders for durable goods jumped in May by the most in nearly six years as nationwide reopenings rekindled demand for a broad range of merchandise and equipment.

Forecasters believe the economy will rebound in the second half of the year. The Congressional Budget Office is predicting a 21.5% growth rate in the July-September quarter followed by a 10.4% gain in the fourth quarter.

However, a handful of states, particularly in the South, have begun to report surging infections. And even if a rebound materializes in July, it will follow seismic losses that would mean a decline in economic output for the entire year.

While overall gross domestic product was unchanged for the first quarter, the composition shifted slightly with downward revisions to consumer spending, exports and business inventories offset by an upward revision to business investment.

The Thursday report was the government's third and final look at first-quarter gross domestic product.

The panel of economists that determines when U.S. recessions begin said that February marked the end of the longest economic expansion in U.S. history, 128 months of uninterrupted growth that began in the wake of the 2008 financial crisis.

President Donald Trump has declared that the economy will come roaring back with a V-shaped recovery starting this summer. Larry Kudlow, the president's chief economics adviser, said Thursday that even with the resurgence in coronavirus cases, the administration is still looking for a strong recovery in the second half of this year.

Kudlow acknowledged that there will be "spikes and hot spots," that could force shutdowns "in individual places or certain stores." But he said the American people will "have to live with this, from time to time."

"So we're going to see these things. But the economy is not going to be closed down again," Kudlow, later told reporters at the White House.

Economists are nowhere near as optimistic as Kudlow. They are worried about the devastating effect of a second wave of infections and think it will take a couple of years to get back the lost gross domestic product output.

"The foundation to this recovery is an improving health outlook," said Lydia Boussour, senior U.S. economist at Oxford Economics. "Amid rapidly rising infections across many states, risks to the outlook are dangerously tilted to the downside."

"I can't remember the economy facing this much uncertainty," said Sung Won Sohn, a business and economics professor at Loyola Marymount University in Los Angeles. He said that until a vaccine is found and widely available, the high uncertainty can be expected to last.

Mark Zandi, chief economist at Moody's Analytics, said for the country to avoid a double-dip recession, an effective vaccine needs to be available next year and new waves of coronavirus cases will need to do less damage than the first wave. Congress needs to soon pass another package of at least $1 trillion in further support for laid-off workers and struggling businesses, Zandi said.

"If any of these three things don't happen, then the outlook is much darker," Zandi said. "I think we are in a recovery mode right now but the economy is very fragile."

Bookings for durable goods -- or goods meant to last at least three years -- surged 15.8%, the most since July 2014, after a revised 18.1% decline in April, Commerce Department data showed Thursday. Core capital goods orders, a category that excludes aircraft and military hardware, increased 2.3%, more than twice the median projection.

Even so, orders valued at $194.4 billion in May remain far short of where they were just three months earlier, suggesting the path to recovery will be a long one.

Shipments of core capital goods, a figure economists use to calculate gross domestic product, climbed 1.8% in May.

Transportation-equipment orders jumped nearly 81% in May, including a 27.5% increase in motor vehicles and parts. The value of commercial aircraft bookings rose to $3.1 billion after a decline of $8.6 billion, which reflected order cancellations. Nondefense capital goods orders including aircraft rose 27.1% in May.

Information for this article was contributed by Martin Crutsinger and Darlene Superville of The Associated Press and by Reade Pickert of Bloomberg News. 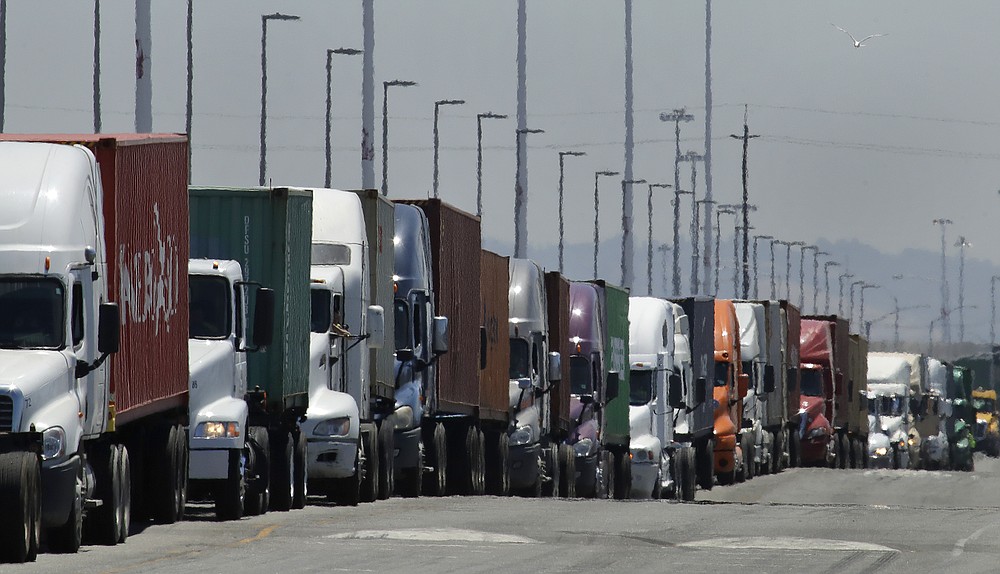 FILE - In this July 22, 2019 photo, trucks hauling shipping containers wait to unload at the Port of Oakland in Oakland, Calif. The Commerce Department issues its second estimate of how the U.S. economy performed in the first quarter of 2020 on Thursday, May 28, 2020.(AP Photo/Ben Margot, File) 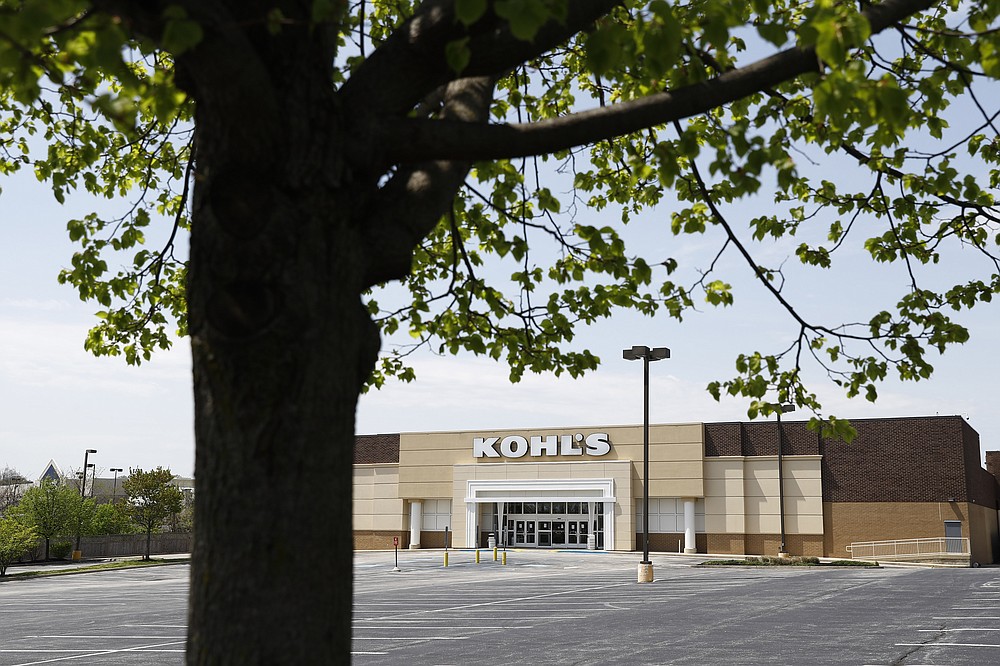 An empty parking lot is seen at a temporarily closed Kohl's department store, Wednesday, April 29, 2020, in Havertown, Pa. Devastated by the coronavirus, the U.S. economy is sinking. Now, as some businesses in a few states start to trickle back to work, hopes are beginning to arise that the economy, damaged as it is, might be poised to rebound by the second half of the year. (AP Photo/Matt Slocum) 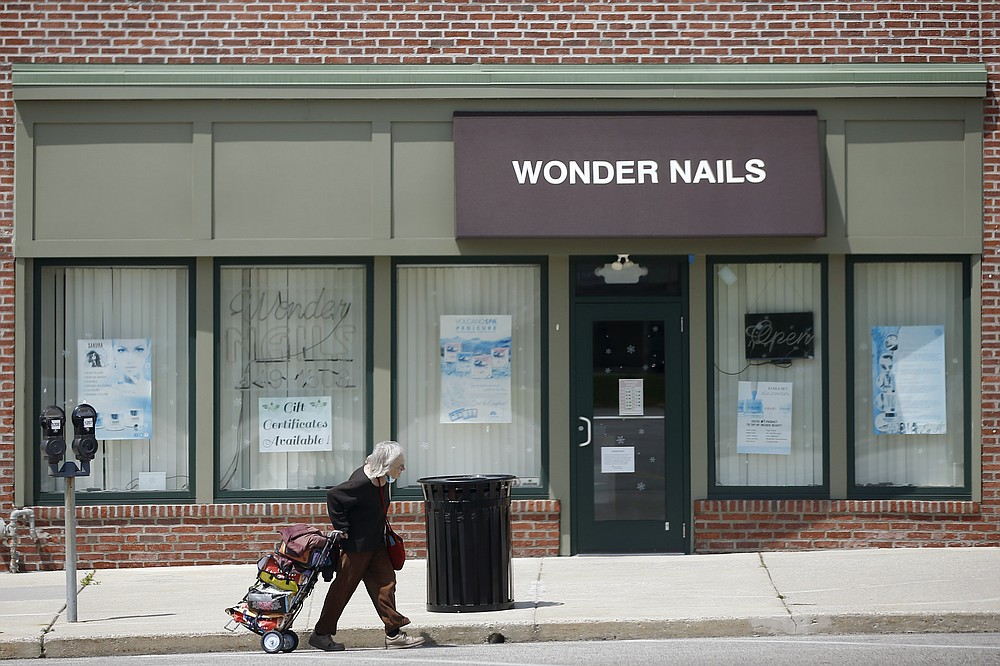 A person walks past a row of closed businesses, Wednesday, April 29, 2020, in Upper Darby, Pa. Devastated by the coronavirus, the U.S. economy is sinking. Now, as some businesses in a few states start to trickle back to work, hopes are beginning to arise that the economy, damaged as it is, might be poised to rebound by the second half of the year. (AP Photo/Matt Slocum)
ADVERTISEMENT