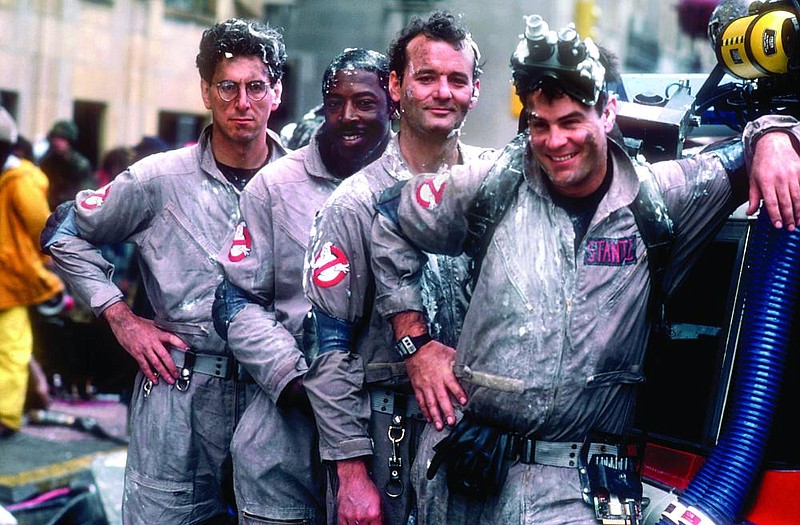 Matt Smith has five theaters around Arkansas that are open and scrambling for product. Today, he's opening the original Ghostbusters in all of them.

If you elect to attend one of the screenings, I ask that you not do what we did when Ghostbusters originally opened in June 1984. The economics of running an independent cinema have always been tricky, but in these locked-down covid-19 times margins are even slimmer. Besides, you can get alcohol at the movies now.

So don't do what we did in 1984. Don't smuggle liquor into a movie theater.

Anyway, it was he and I and the education reporter and one of the staff artists. We smuggled the whiskey into a Ghostbusters matinee one weekday in June 1984. We upended that fifth into the cola products we legitimately bought at the concession stand and drank the mixture as we watched Ghostbusters for the first time.

We had a fine time. We all giggled when the empty bottle sitting at the City Hall reporter's feet somehow got kicked over and slowly roll-rattled down the sloped concrete floor to the front of the theater. Afterward, we went out for Mexican food.

It was only some years later when I watched it again without the benefit of friends and whiskey that I realized Ghostbusters isn't a great movie. Like a lot of movies from the '80s, it feels overrated.

I'm not sure why so many people seem to venerate middling '80s movies, except that a lot of those people were probably around 12 years old when those movies came out. Pop culture is always at its best when you're about 12; that's when you start waking up to all that's cool about movies and music and books, and partly because a lot of the big entertainment products are calibrated to the tastes of pre- and early teens.

If Ghostbusters is one of your favorite movies, you probably are in your mid-to-late 40s. Ghostbusters -- and The Goonies and Ferris Bueller's Day Off -- seem to pop up a lot in retrospective screening because a lot of the programmers are about that age.

In the 1990s, a lot of '70s movies got similar consideration. Now that theatrical release dates mean less, since streaming services have made era-hopping through movies the new norm, it will be interesting to see if this phenomenon holds. A lot of 12-year-olds will see Ghostbusters this year.

I saw Ghostbusters as an immature adult, so I think it's funny, but it's no Blazing Saddles.

Bill Murray is all right in it, basically doing his Bill Murray-charms-with-babytalk schtick, and the other main roles are terribly underwritten. Harold Ramis and Dan Aykroyd have little to do and do it adequately, though there's a flatness in the latter's performance that in retrospect feels very sad.

Aykroyd was one of my favorite actors in the late '70s and early '80s, and I always expected him to break out as a major star, possibly in a dramatic role. But his role as Dr. Ray Stantz in Ghostbusters marked the start of a long string of indifferent performances; it was as if some light went out inside him. He can still be very good -- but has never been as much fun. Rick Moranis, who seemed like a genius on SCTV, is pigeonholed as a creepy schlub. And let's not forget poor Ernie Hudson, whose role as "the black Ghostbuster" is so slight that it feels like tokenism.

The movie is bearable when it concentrates on Murray's banter and other small moments. But unfortunately, it too soon becomes a special effects-driven spectacular that is even less compelling today than it was in 1984. Ultimately, the presence of Murray and Sigourney Weaver makes it watchable, but it's hardly the comedy classic that some seem to regard it as being.

The consensus of the reviews in 1984 was that it was just OK. The Hollywood Reporter called it "only intermittently impressive." Writing in The New York Times, Janet Maslin called it a "messy, near-miss film" that paid "more attention to special effects than to humor." So why does this very average film have a 97% positive rating on Rotten Tomatoes?

Well, most of the reviews of the 1984 Ghostbusters were written long after the movie opened by people who saw it in circumstances very different from the way most critics see most films. A lot of the people who are very fond -- and protective -- of Ghostbusters probably saw it as children on TV or home video. Which means they saw a different movie from what I saw. Because none of us ever sees the same movie. And in the end, each of us probably remembered the adventure of watching Ghostbusters better than we did the movie itself.

Maybe no one should attempt a remake unless they're fairly certain they can improve on the original. By that logic, Ghostbusters is the sort of movie that it's perfectly acceptable to remake, and a lot of the fanboy angst that greeted Paul Feig's distaff version in 2016 was silly and misogynistic.

Ghostbusters is a good thing to open now when there's a dearth of product for the few reopened theaters to show. Like It's a Wonderful Life or Gone With the Wind, whether or not it's a genuinely great movie is beside the point. It has, for better or worse, gained a foothold in our collective consciousness, become part of of common store of images and tropes. Whatever else it is, it has become a classic.

The film is back in theaters strating today.