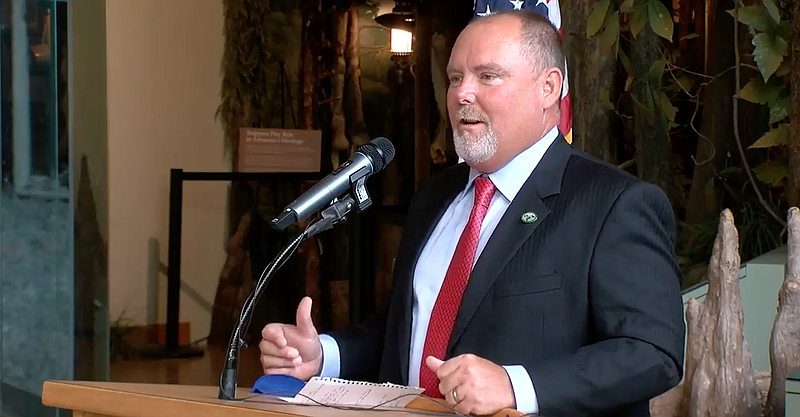 Rob Finley, 54, of Mountain Home speaks at the Witt Stephens Jr. Central Arkansas Nature Center in Little Rock on Friday in this still of video provided by the governor's office.

Rob Finley, 54, of Mountain Home has been appointed by Gov. Asa Hutchinson as the newest member of the Arkansas Game and Fish Commission.

The announcement was made Friday morning at the Witt Stephens Jr. Central Arkansas Nature Center in Little Rock.

Finley fills the seat vacated by the retirement of former commissioner Ken Reeves of Harrison. He will serve a seven-year term.

Raised in Lawrence County, Finley owns Cranor’s White River Lodge in Cotter and Route 66 Extended Warranty. He is a lifelong hunter and angler who said his goal as a commissioner is to improve access to the state’s fish and wildlife resources for its citizens and to improve the experience of hunting and fishing on public land.

“If I could pick one thing as a point of emphasis, I think access is a key,” Finley said.

Finley said he is proud of the quality of hunting and fishing in Arkansas and that he loves sharing it with people from around the country. He also said his diverse life experiences will be an asset to the commission.

“I may be the most diversified blue collar commissioner they’ve had,” Finley said.