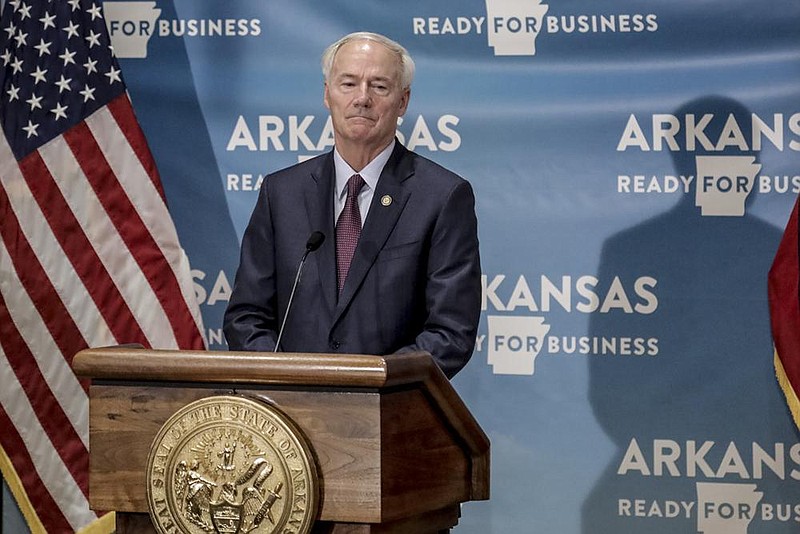 Gov. Asa Hutchinson on Thursday continued to defend Arkansas' lack of a requirement for people to wear masks in public during a rapid increase in coronavirus cases and growing number of hospitalizations.

The state's count of cases increased by 687, topping 18,000, on Thursday while its death toll from the virus, as tracked by the Arkansas Department of Health rose by two, to 242.

The overall case count rose Thursday to 18,062, while the number of patients hospitalized with the virus increased by 17, to 284.

Sixty-six of the patients were on ventilators, up from 58 a day earlier.

"Before you start passing laws that govern conduct, there needs to be some level of acceptance of that in the state and by the public," he said. "And so it's one thing to encourage everyone to wear a mask, and you build public support for it, and they start doing that."

But, he said, "if you start to penalize it and make it mandatory, then there's a resistance against that, there's not broad public acceptance of it, and it throws the whole thing in shambles."

Hours after Hutchinson spoke at his daily news conference on the pandemic, Little Rock Mayor Frank Scott Jr. signed an executive order making masks mandatory in the city in public spaces where social distancing is not possible.

[Video not showing up above? Click here to watch » https://www.youtube.com/watch?v=mg0IgenjK4U]

Hutchinson has discouraged cities from passing such requirements, saying they conflict with his emergency declaration that gives him and the Health Department "sole authority over all instances of quarantine, isolation, and restrictions on commerce and travel."

Meanwhile, Secretary of State John Thurston said in a statement Thursday night that the state's current laws provide sufficient latitude for voters concerned about the coronavirus to request an absentee ballot for the general election in November.

He noted that the law allows a voter to request a ballot if he or she will be "unavoidably absent from his or her voting place on the day of the election," among other reasons that can be given.

"We are fortunate that our lawmakers had the foresight in crafting our election laws to allow for times of being unavoidably absent whether by natural disaster, war, or global pandemic," Thurston said.

He said he's "anticipating and preparing for an increase in Absentee Ballot requests due to the COVID-19 virus."

A lawsuit filed in Pulaski County Circuit Court this week seeks to force Thurston to require no-excuse absentee voting during the election.

Hutchinson issued executive orders allowing such voting for the March 31 primarily runoff and special elections in May and this month.

Hutchinson had said he will make a decision by August on measures needed to ensure safe voting during the general election.

After topping 500 for the first time on Wednesday, the average number of cases added to the state's total each day over a rolling seven-day period increased Thursday to 591.

According to a count by CNN, 16 states and the District of Columbia have requirements for people to wear masks in indoor public settings.

While Hutchinson has stopped short of issuing such a requirement, rules issued by the Health Department require customers and employees to wear them in certain types of businesses, such as restaurants and hair salons.

A guidance document posted to the department's website last week recommends Arkansans wear them in all indoor environments in which they could come within 6 feet of people who are not from their households.

It notes that an increasing amount of evidence indicates wearing a mask can prevent an infected person from spreading the virus to other people through droplets emitted when someone coughs, sneezes, speaks or breathes.

The University of Washington's Institute for Health Metrics and Evaluation, whose projections are often cited by public health officials, predicted Wednesday that the death toll from the virus in the United States by Oct. 1 could be reduced by more than 33,000, to a projected 146,047, if at least 95% of Americans wear masks in public.

In Arkansas, it said such widespread mask use would lower the projected number of deaths from 988 to 576.

"If we had the majority of Arkansans wearing face masks when they were in public consistently and properly, we would likely see tremendous decrease in the amount of transmission," Health Secretary Nate Smith said.

He said he's seen evidence of their effectiveness in workplaces and places of worship.

"In those where they've not followed the guidelines, you do see transmission," he said.

At his news conference, Hutchinson praised a campaign by the Springdale Chamber of Commerce as a way of encouraging mask use without making it a legal requirement.

The campaign includes signs with messages in English and Spanish saying "protect & respect," "wear a mask" and "masks are mandatory for entry to this business."

In a June 17 statement on its website, the chamber said a mask ordinance would be "illegal and unenforceable," but it encouraged its members to require employees and customers to wear them "as a common-sense measure to minimize the impact of the COVID-19 virus.

"As an example, the Chamber is now requiring anyone entering our building to wear a mask to protect the health of our employees. Except when alone in their offices, our staff will follow suit when in common areas and when meeting with visitors."

Hutchinson also pointed to indications that the growth of cases in Benton and Washington counties, which have generally led the state in the number of new cases added each day, is beginning to flatten.

He displayed charts showing that, after rising through much of May and June, the average number of new cases added each day over a rolling seven-day span had plateaued in recent weeks.

Hutchinson credited increased testing in the counties, contact tracing by the Health Department and better adherence to the department's guidelines.

"The community took it very seriously," Hutchinson said. "They increased their level of intensity on wearing masks, social distancing."

He said he heard that "in one big-box store, 30 days ago there were 30% of the people wearing masks.

The cases added to the state's total on Thursday included 96 in Washington County, 45 in Benton County, 44 in Pulaski County, 26 in Lonoke County and 26 in Sebastian County.

Cases among prison or jail inmates accounted for 168 of the cases, Smith said. Those are often added to the state's total several days after a test is performed, after information from laboratory reports are entered into a state database.

In Russellville, the positive test of an employee prompted a Casey's convenience store to close for cleaning.

Katie Petru, a spokeswoman for Casey's corporate offices, said they were notified late Wednesday afternoon of the positive test result.

Petru said the "health and wellbeing" of its employees and guests is "our top priority." The store at 307 S. Arkansas Ave. was immediately closed and a deep cleaning by a third-party provider was initiated.

A crew in protective suits could be seen at the store Thursday.

"This was also the recommended guidance from the Department of Health and consistent with [U.S. Centers for Disease Control and Prevention] guidelines," Petru said. "The store is temporarily closed and will reopen once the necessary cleaning is complete and we can ensure the safety and availability of Casey's team members to support daily operations."

The number of Arkansans listed as having recovered from the virus increased by 559, to 12,127.

That left 5,695 cases that were considered active, up by 128 from a day earlier.

Among those who died of the virus recently were a former school cafeteria worker from Cabot and residents of nursing homes in Jacksonville and Maumelle.

She was admitted to the hospital on June 10 after testing positive for covid-19. Neeley had a history of high blood pressure and Alzheimer's.

Her daughter, Lisa Garner, said that Neeley had tested negative for the virus several times before the positive result.

"She deteriorated quickly after that," Garner said. "She spent two weeks at Baptist and she developed pneumonia in her left lung."

"They said that she needed to hear from each of us kids that it was OK and to go on to heaven," Garner said. "The nurse told her, 'David, Darlene and Lisa said to go on to heaven. They've got it covered here.' Right after that, she passed away, at exactly 4 o'clock."

Garner said because of the pandemic, she had not seen her mother since May 7 and her mother passed away with no family members by her side.

Neeley worked for more than 30 years in the cafeteria of the Cabot Public School District.

"She loved it," Garner said. "She would stop the cafeteria line and give a child a hug or a kiss if they were crying because they missed their momma. The other workers would say, 'Miss Mable, you're holding up the line.' And she'd say, 'I've got to hug this baby's tears away."

Neeley was known for her cakes, bread and rolls, her daughter said.

"Her cinnamon rolls were famous. Everyone wanted Miss Mable's cinnamon rolls," Garner said. "She even made a prune cake one time at the elementary school cafeteria and the kids loved it. She didn't tell them it had prunes."

Garner said her mother was "very feisty" and adventurous.

"She didn't hold anything back," Garner said. "If she had something to say, she'd talk to your face instead of behind your back."

Neeley and her late husband, Don Neeley, were married for 56 years and had three children, four grandchildren and six great-grandchildren.

Garner said one of her favorite memories of her mother was when the family lived in Athens, Greece, while their father was in the Air Force. Her mother couldn't watch "her soaps" in Greece so she went out to play baseball with the kids.

"She slid into third base and broke her leg," Garner said. "They had to cut her pants off and she was more worried about the pants than the broken leg."

Carrie Faith, a 105-year-old resident of Woodland Hills Nursing and Rehabilitation in Jacksonville, died Tuesday from covid-19, according to a Pulaski County coroner's report.

The report did not list any previous health history.

A Health Department report on Thursday said 42 residents at the home had tested positive for the virus, including eight who died.

Thirty-one workers at the home also have tested positive, according to the report.

Helen Holt, a 90-year-old resident of The Lakes at Maumelle Health and Rehabilitation, passed away Wednesday at Baptist Hospice after testing positive for covid-19, according to a Pulaski County coroner's report.

Holt had Alzheimer's and had been under hospice care since June 8. 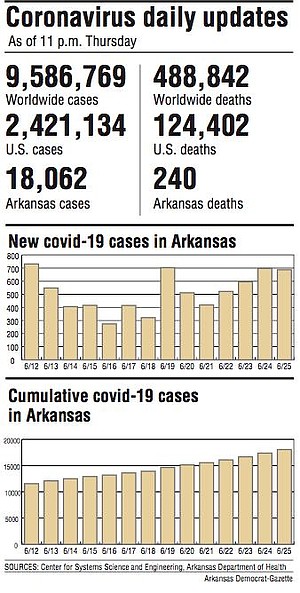