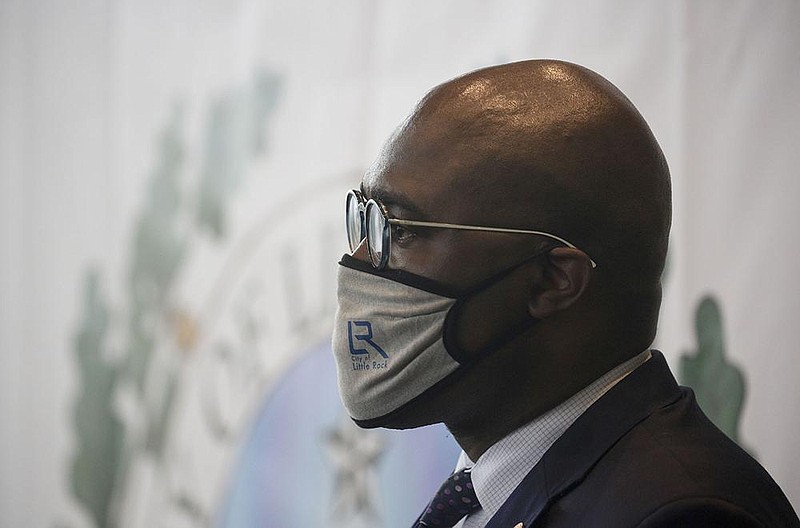 Masks or other face coverings are now required in public spaces in Little Rock where 6 feet of social distancing cannot be maintained, according to an executive order signed Thursday evening by Mayor Frank Scott Jr.

The order, issued at 5 p.m., cites the surging number of new cases of the deadly coronavirus in Arkansas and notes studies and recommendations from experts that point to mask-wearing as a way to stem the spread of the respiratory infection, which is typically transmitted through droplets from coughing, sneezing or talking.

Scott said on social media Thursday evening that he signed the order in the best interest of the city's public health and economy.

He said at a news briefing last week announcing that an executive order would be written that he felt the city needed to implement restrictions as the state reopens.

"We do feel it necessary to have public restrictions as we are traversing around and we cannot keep social distance between one another," he said.

The order states that all members of the public, except for specifically stated exemptions, are "exhorted" to wear face coverings when inside of or in line to enter any business; at the entrance to and inside elevators in all public and private buildings; engaged in essential infrastructure work; waiting, riding or driving public transportation, including buses, taxis, private car services and ride-sharing vehicles.

All businesses as well as entities engaged in essential infrastructure work or essential government functions except health care, which is subject to its own regulations, are to require their employees, contractors, owners and volunteers to wear face coverings when interacting with the public, working in any space visited by members of the public and in any room or enclosed area where others are present.

Businesses and organizations also are directed to take "reasonable measures," such as posting signs to remind people of the requirement, and to take reasonable steps to prohibit anyone not wearing a face covering from entering -- and not serve them if they still refuse to cover up.

The order exempts children 12 and younger, though it still strongly recommends that children older than 2 wear face coverings.

Individuals who have medical or workplace-related risks related to mask-wearing are also exempt.

The order includes language that nothing in the declaration shall be used to regulate or interfere with commerce.

An executive order issued by Gov. Asa Hutchinson on March 11 states that the state has sole authority over all restrictions on commerce.

City Attorney Tom Carpenter said he had not yet read the order when reached by phone after it was signed Thursday evening because he had been out sick for the past few days, though he had recommended language to ensure the order would not override the state's executive order.

He said he felt the language "would give the city the strongest possible argument."

The order was drafted by Carpenter's staff at the direction of the mayor's office.

Hutchinson has declined to issue a statewide order on face coverings.

"I think we've lost our sense of balance if that's really the essence of the debate as to whether it should be mandated or whether it's something that should be encouraged and we educate people on," Hutchinson said during Thursday's daily news conference. "The most important thing is increasing the number of people who take personal responsibility."

The governor said there is a growing acceptance and understanding of why masks are needed, but acknowledged that it is a challenge for restaurateurs to enforce mask wearing among staff members and guests, which is a state directive.

"I'm getting calls all the time saying 'so and so's not doing it,'" he said.

"Whenever a low percent of the public decides not to wear masks, or they might wear a mask, but if you start penalizing it and making it mandatory, then there's resistance about that," Hutchinson said. "It throws the whole thing in shambles and loses credibility."

A spokeswoman for the governor said Thursday night that Hutchinson would review the order and respond during today's covid-19 news briefing.

Ward 4 City Director Capi Peck, who is chef and owner of Trio's Restaurant, said she was hopeful the order would help business owners enforce mask-wearing. Peck has not yet reopened her eatery for dine-in but enforces mask-wearing for employees and customers picking up orders.

"It gives it a little more teeth if there's some sort of a mandate or ordinance. Maybe it's just optics or verbiage, but if you can say the city of Little Rock has required this, I think it's a bit more meaningful for some people," she said. "I'm thinking that could only help, because I know a lot of business owners have had some ugly incidents with people just refusing. ... It's not like we're going to go out and find anybody, but I think it'll give it more weight, at least I'm hoping that's true."

Asked how the order would be enforced, mayoral spokeswoman Stephanie Jackson said by email Thursday night that the city can pursue all legal remedies available to the city to handle public nuisances, since the order is "an attempt to prevent and protect our residents from the immediate threat of covid-19."

Code enforcement officers may issue citations, which would be handled in environmental court, she said. In some instances, a criminal citation may be issued resulting in a misdemeanor.

Jackson said the city implemented "the most stringent mandate allowed within the state's parameters," which goes as far as it can under the governor's declaration."

"However, we hope residents will voluntarily comply to slow the spread in Little Rock," Jackson wrote.

The order itself does not include any penalty for individuals who do not comply. An earlier draft of the declaration, provided to the Democrat-Gazette on Thursday morning, included specific language about any violator being considered a public nuisance under state statute.

A similar local mandate is unlikely in the capital's neighboring city. North Little Rock Mayor Joe Smith told the City Council on Tuesday that any order about masks would be Hutchinson's to issue.

"We can only do what the governor allows us to do," Smith said. "It wouldn't be worth the paper it was put on. The one Little Rock did and the one Fayetteville did was worthless."

Little Rock followed Fayetteville in requiring masks in public. On June 16, the Fayetteville City Council approved an ordinance requiring members of the public to wear masks in most indoor public places. 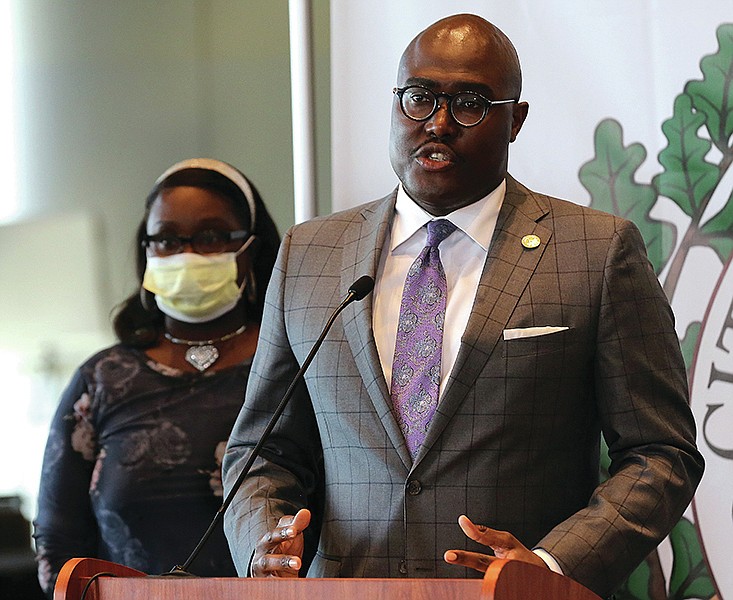