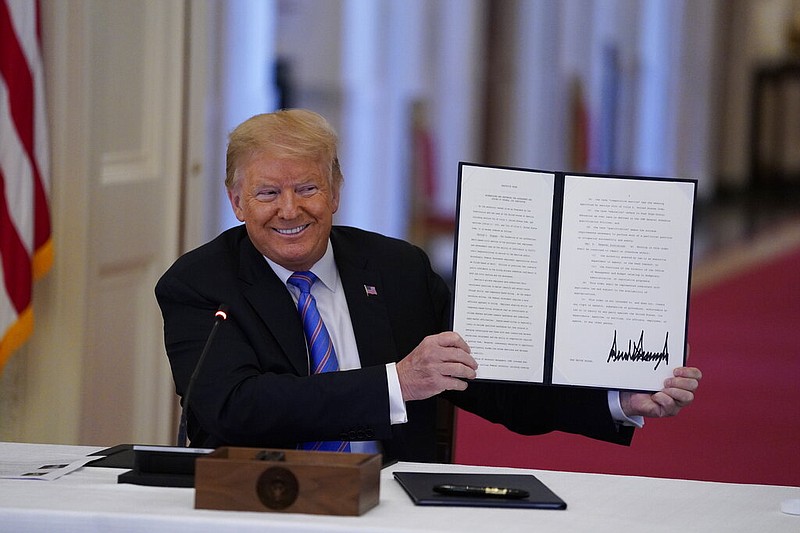 President Donald Trump holds an executive order that he signed during a meeting with the American Workforce Policy Advisory Board, in the East Room of the White House, Friday, June 26, 2020, in Washington. The order prioritizes job skills over college degree in government hiring. (AP Photo/Evan Vucci)

Trump had promised to take action earlier this week after police thwarted an attempt by protesters to pull down a statue of Andrew Jackson in a park across from the White House.

The order calls on the attorney general to prosecute to the fullest extent of the law any person or group that destroys or vandalizes a monument, memorial or statue. Federal law authorizes a penalty of up to 10 years in prison for the “willful injury” of federal property.

The order also calls for maximum prosecution for anyone who incites violence and illegal activity, and it threatens state and local law enforcement agencies that fail to protect monuments with the loss of federal funding.

Trump announced earlier Friday on Twitter that he had signed the order and called it “strong.”

Earlier in the day, the president used Twitter to call for the arrest of protesters involved with the attempt to bring down the Jackson statue from Lafayette Park.

He retweeted an FBI wanted poster showing pictures of 15 protesters who are wanted for “vandalization of federal property.”

Trump wrote, “MANY people in custody, with many others being sought for Vandalization of Federal Property in Lafayette Park. 10 year prison sentences!”

He also said on Twitter that he had scrapped plans to spend the weekend at his central New Jersey home to stay in Washington “to make sure LAW & ORDER is enforced.”

“These arsonists, anarchists, looters, and agitators have been largely stopped,” Trump tweeted. “I am doing what is necessary to keep our communities safe — and these people will be brought to Justice!”

It was one of at least three executive orders Trump signed on Friday. Another executive order outlined a new direction for the federal government, the nation’s largest employer with 2.1 million civilian workers, calling on it to prioritize a job applicant’s skills over a college degree. Ivanka Trump, as co-chair of the American Workforce Policy Advisory Board, predicted the change in federal government hiring would create a more inclusive and talented workforce.

A third executive order continues the advisory board and the President’s National Council for the American Worker. Both boards will now continue until Sept. 30, 2021, unless terminated by the president.