A beautiful oasis in Searcy

Another garden visit was on the agenda this week, but the weather didn’t look too promising. I got up early and looked at the forecast, and it showed a break from 9 until 11:30 for both Little Rock and Searcy (our destination) so I texted and we were on. I picked up a friend a little after 8 and we were on our way. Ann Wood’s garden was our destination. 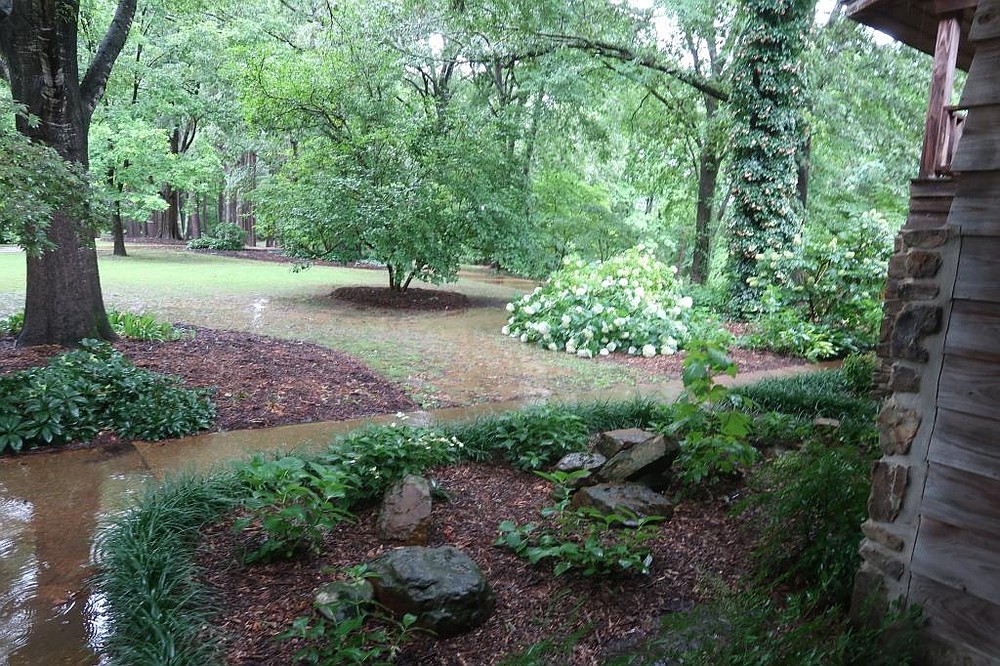 The last time I took a group to tour her garden we had to use umbrellas, but for sleet and a little snow—and it was APRIL! I was leading a tour for the national azalea conference. It was the first time I had ever toured a garden with blooming azaleas with snow on the ground and freezing cold temperatures.

This time, it was raining buckets as we headed north. We were almost leaving Pulaski County when Ann called and said the weather had deteriorated and looked bad, so we should probably reschedule. We told her it was going to clear up (fingers crossed) and we were on our way. We got there and the rain stopped as we pulled into her driveway. The garden was a little wet, and a few drops fell off of overhanging branches, but it was a beautiful day to tour a garden—mild temperatures, low humidity and the sun even came out. 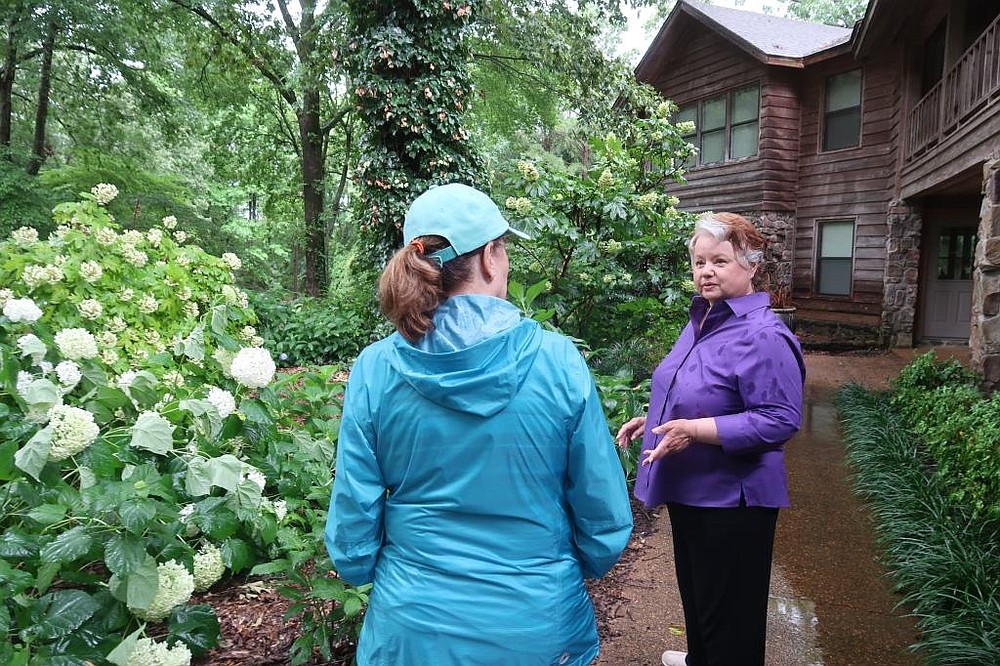 We were truly blessed, not only by the weather, but being able to tour Ann’s garden, with Ann. A nicer and more knowledgeable gardener you will be hard-pressed to find.

Ann Wood is a White County Master Gardener and a top-notch gardener. She and her husband Tony have a large amount of land surrounding their home and every bit of it is pristine. 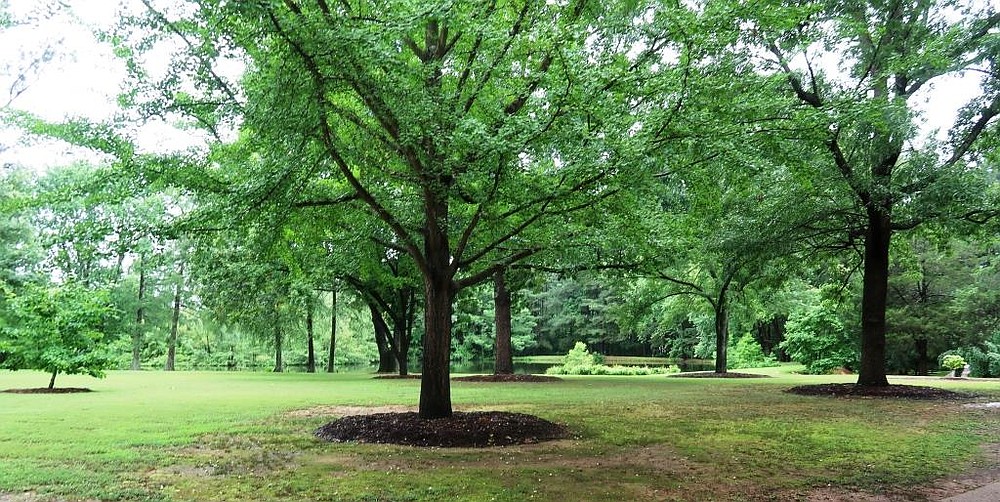 The beds surrounding the house are amazing. Tons of perennials, 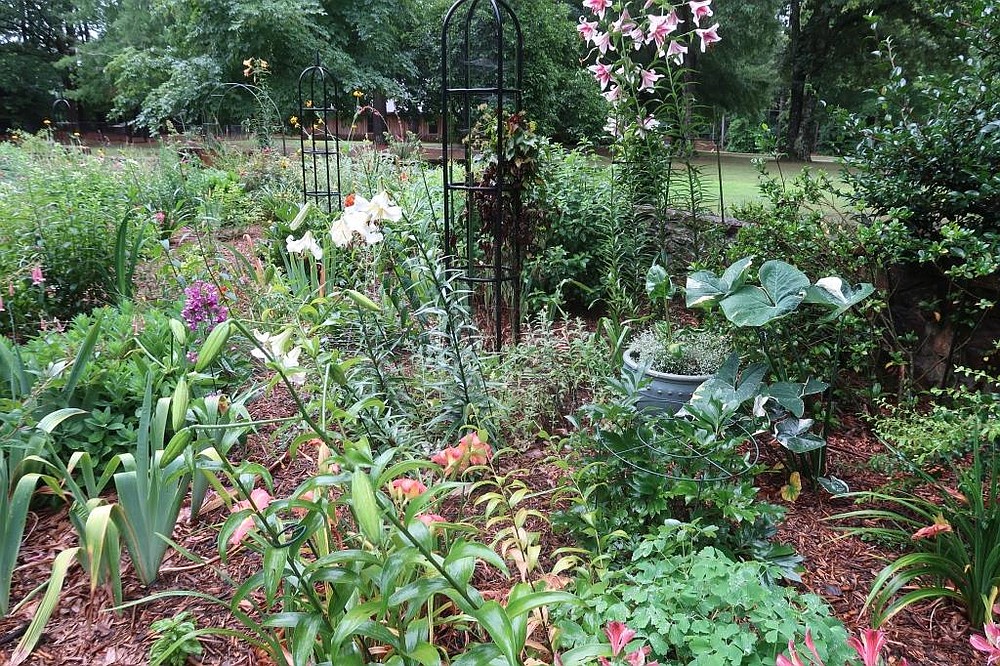 shrubs and trees with unusual specimens at every turn. 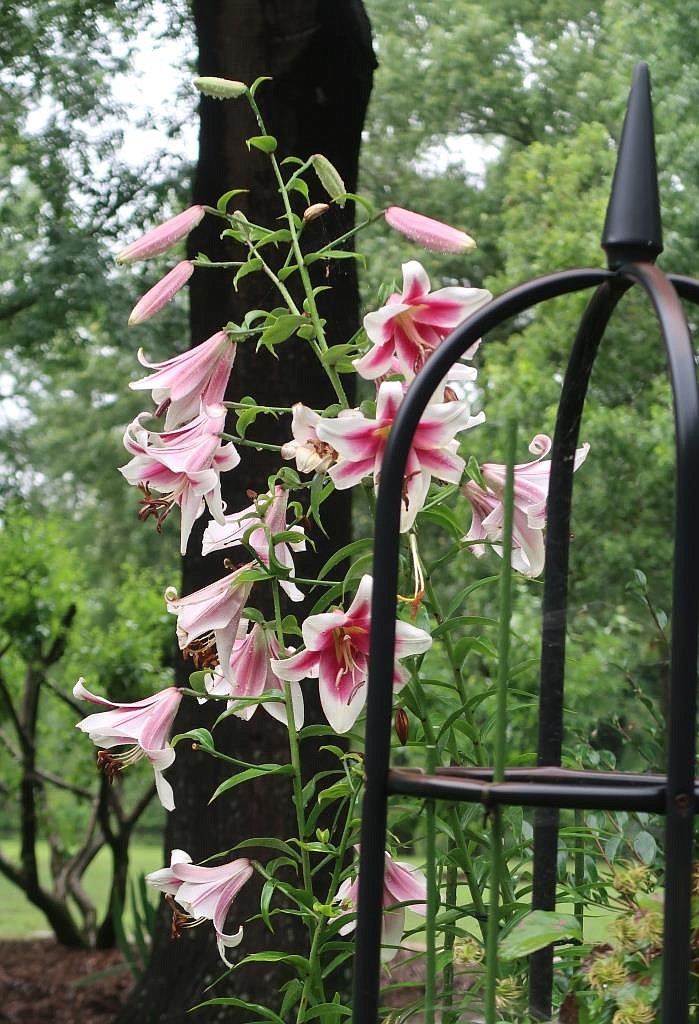 A large rose collection is being hit this year by Japanese beetles, 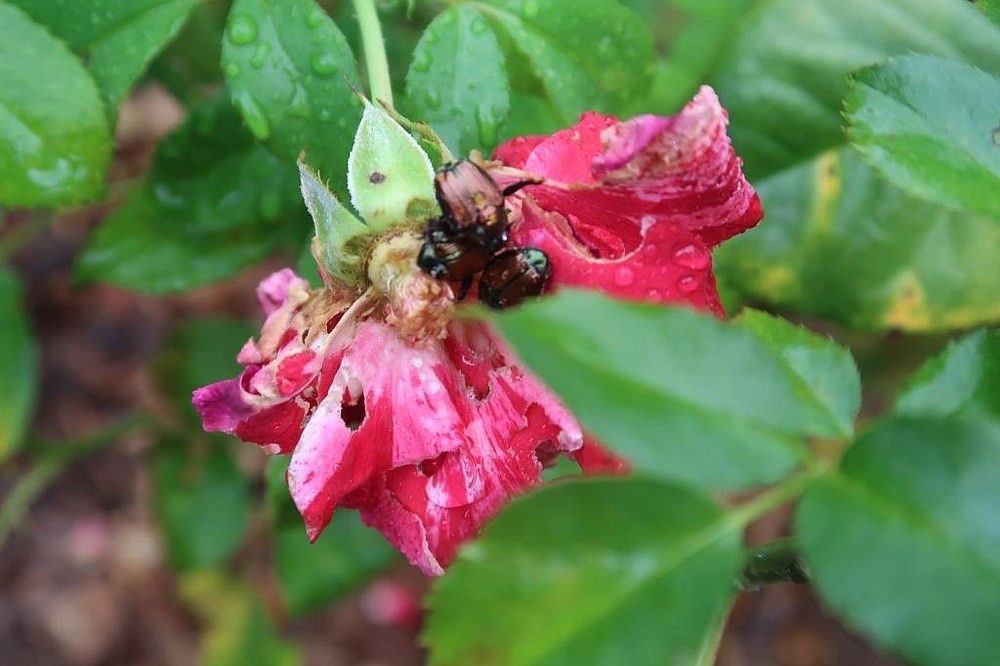 but Ann goes out every morning with a bucket and knocks off all she can find. There wasn’t a weed in sight—which is far from the case in my own gardens. I have been to Ann’s yard many times, and each time is better than the last. She has a keen eye for design and her mixture of plants, textures and color is outstanding. 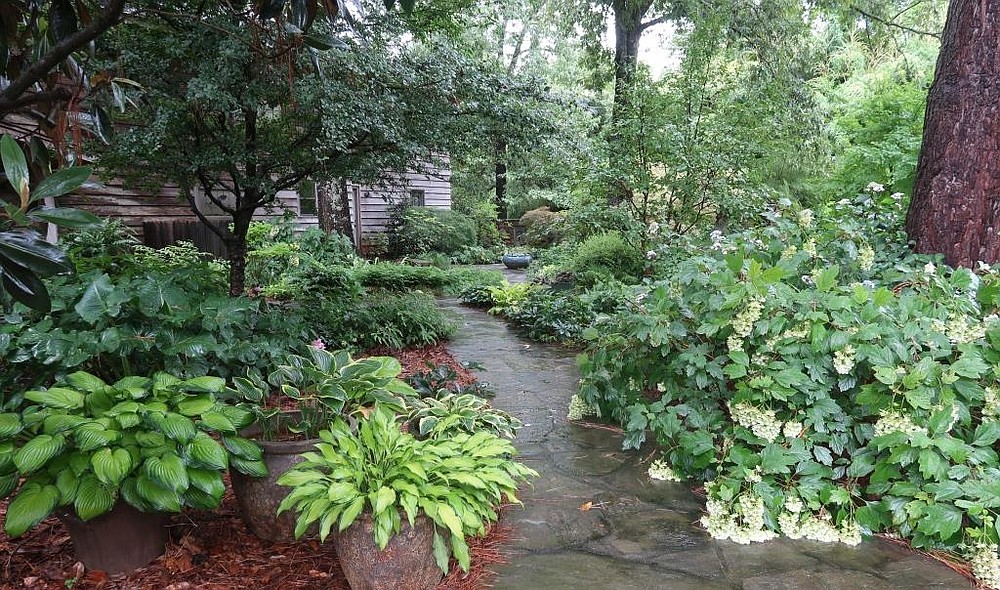 Not only are her ornamental gardens inspiring, but her vegetable garden makes me green with envy. 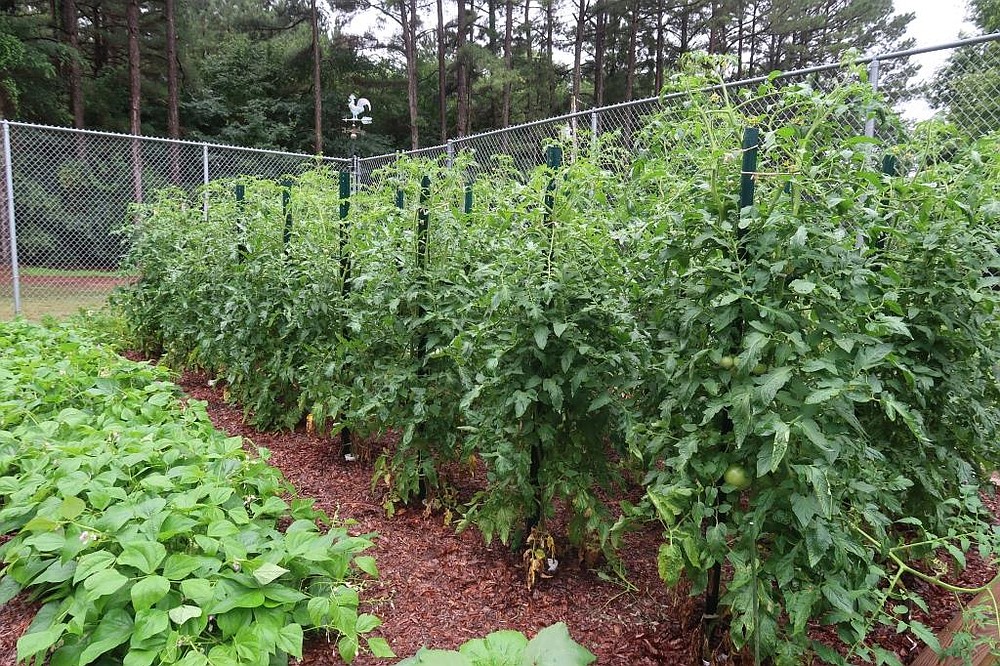 She has enough tomatoes to open a stand at the farmers market, and squash, onions, peppers, beans and more. My friend Carol who was with me, is a great gardener in her own right, but doesn’t know much about vegetable growing. She was more than impressed with the potatoes 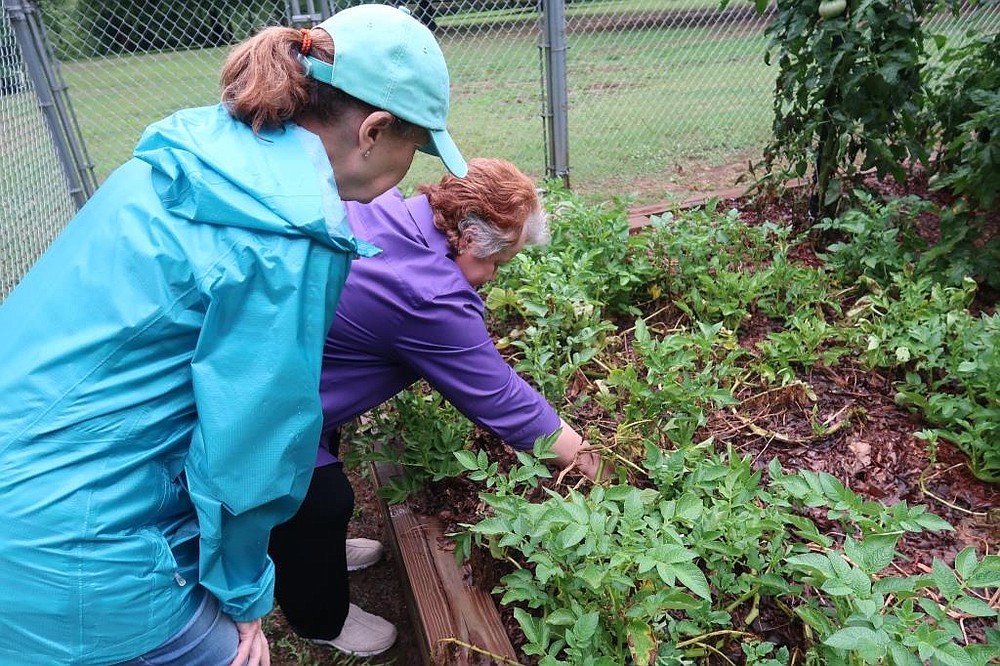 and had Ann show her one underground.

We then went to see her small greenhouse with a whole host of unusual plants, cactus and succulents. 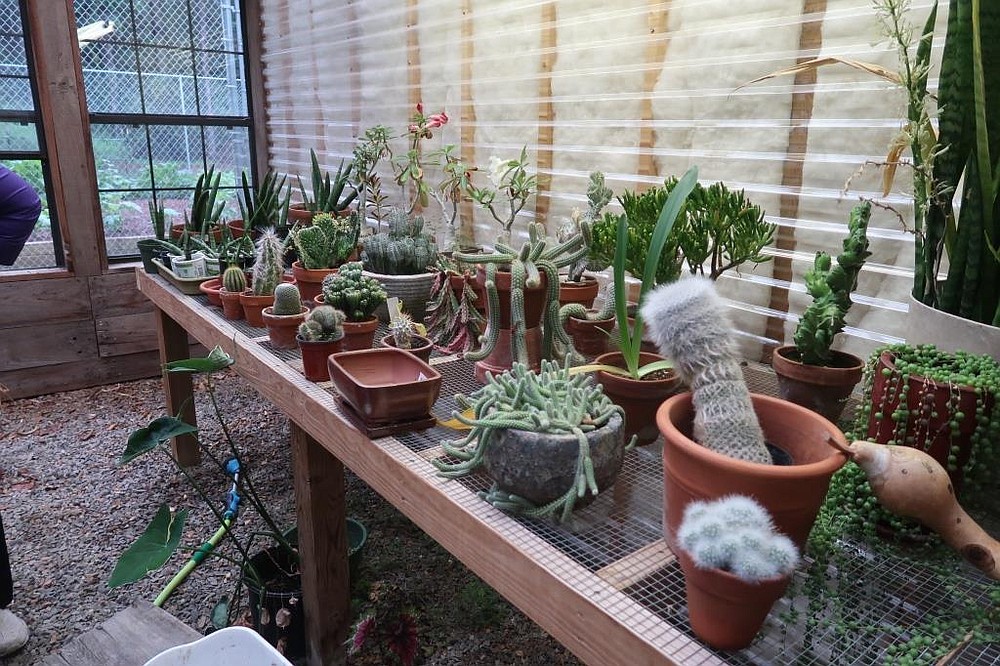 She had huge lemons 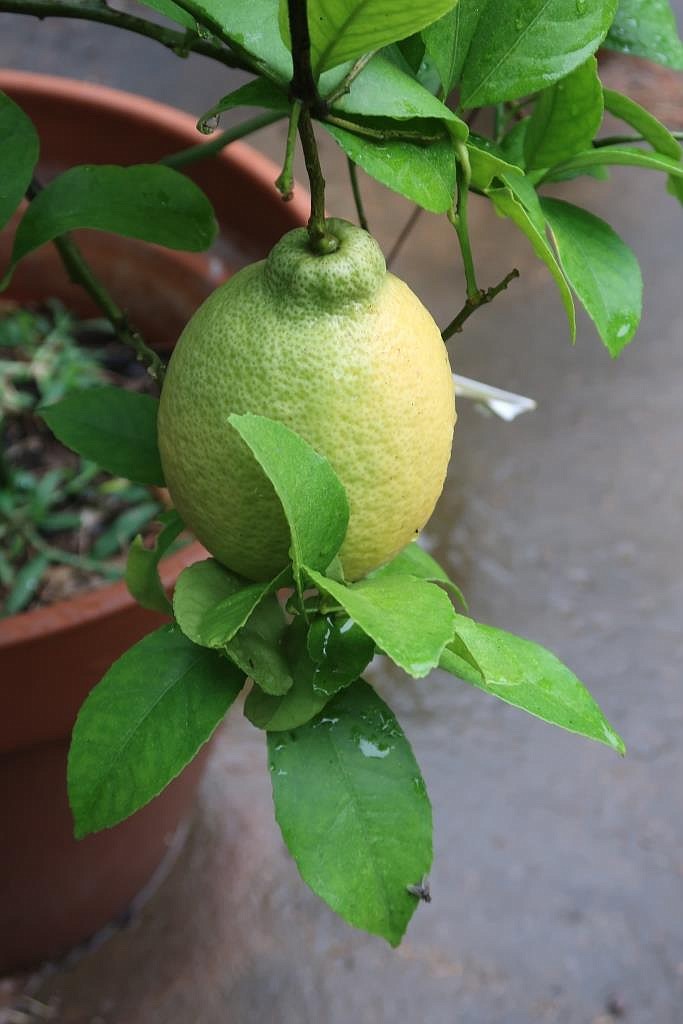 and more coming on. Their large workshop/garage/man cave was also extremely organized and clean, but probably most amazing of all was the wood pile. My wood pile is large and stacked, but this woodpile is a work of art! 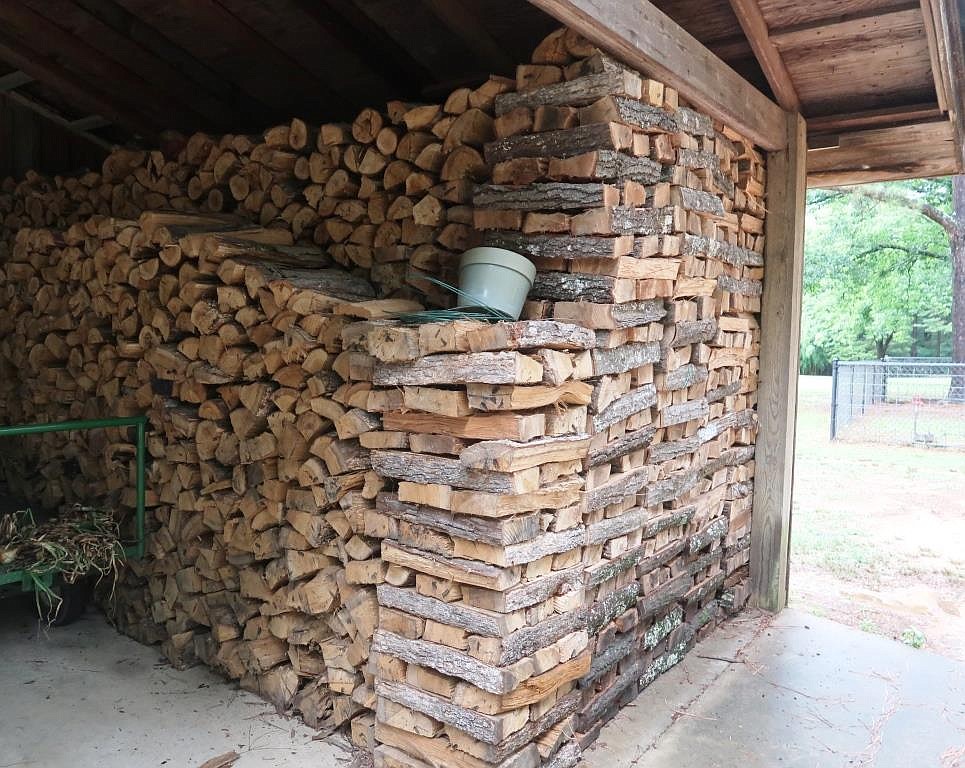 Cut and stacked by Tony! I am not sure when either of them sleeps. 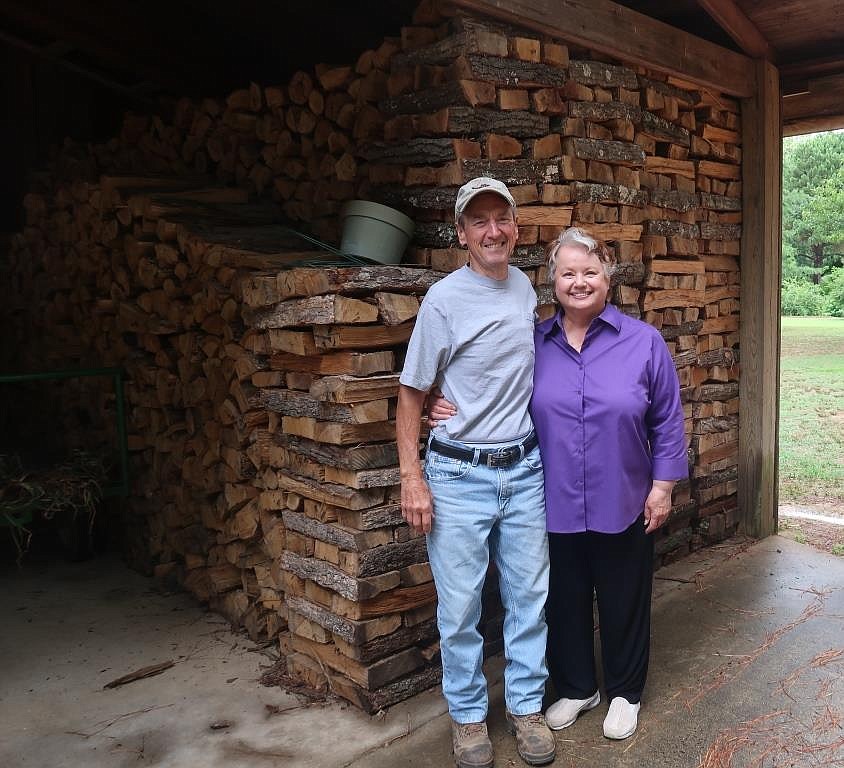 As we were leaving, Ann told us that her MG project was looking good too, so we added that to our list, plus a quick stop at a local vegetable stand. The Pioneer Village park looked great, 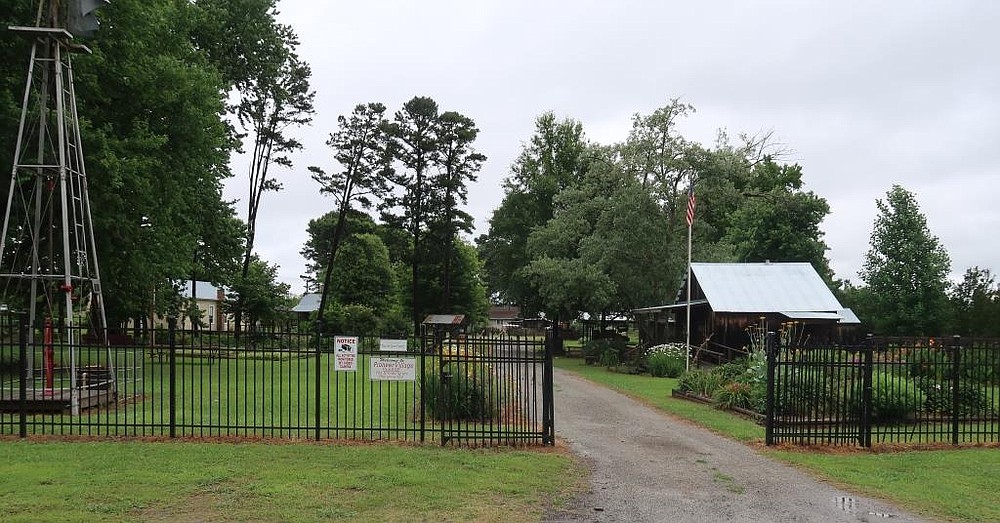 with so many wildflowers 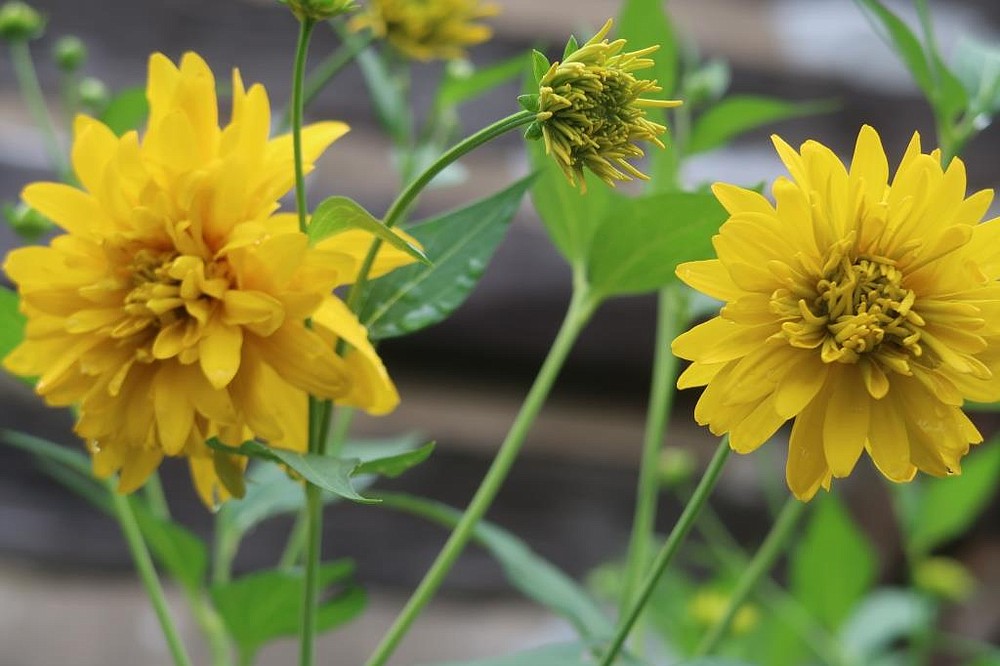 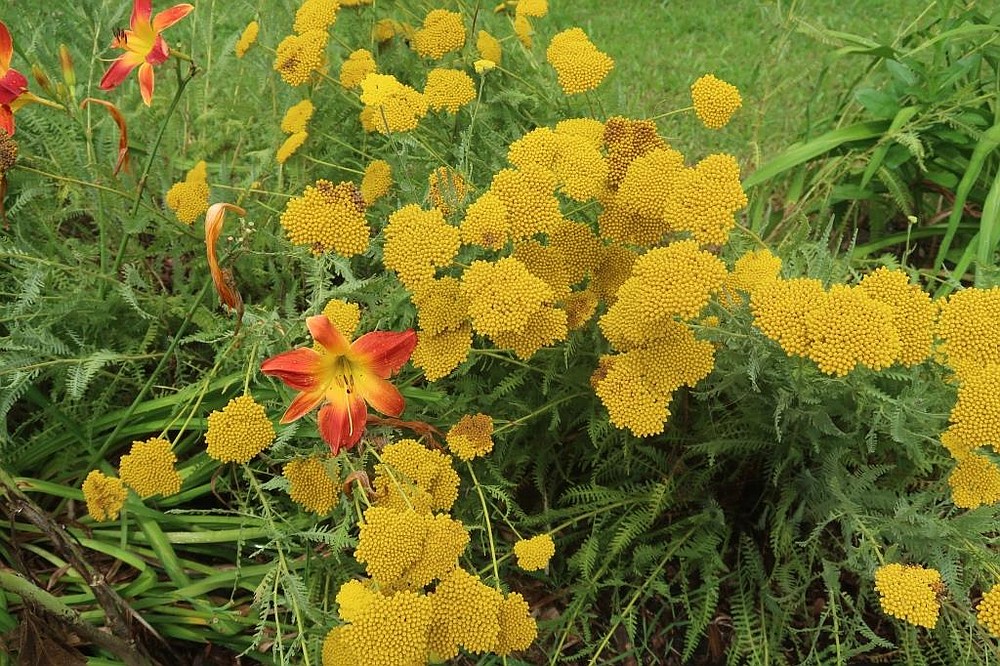 They also had vegetables, grapes, a blackberry demonstration 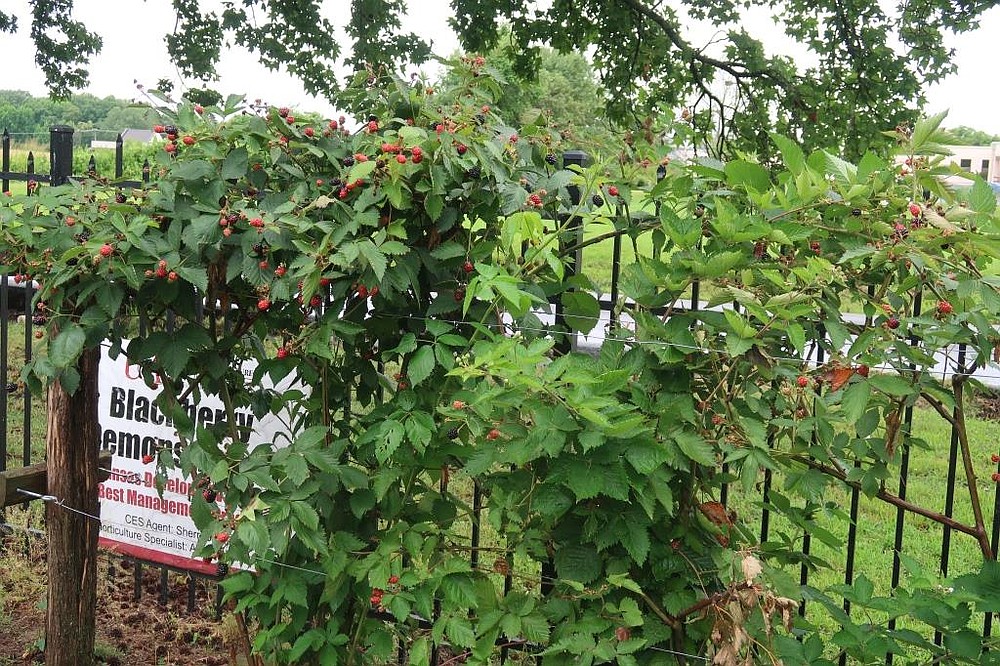 and fruit trees. The weather continued to cooperate and it really was a great day to be touring gardens. 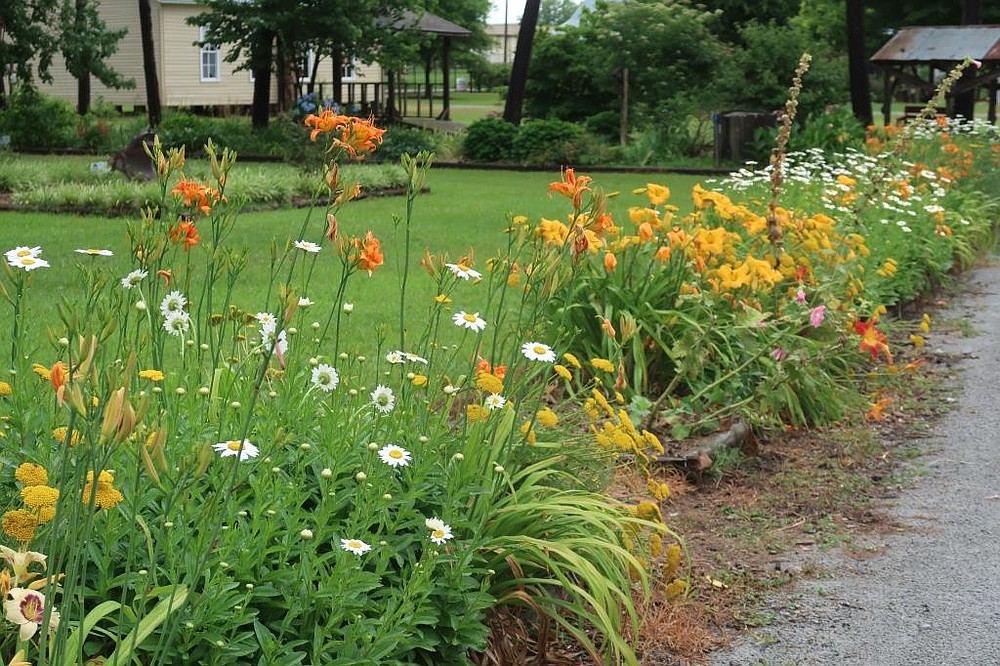 We had rain gear with us, but it was never needed.

Touring gardens, reconnecting with people and enjoying nature is good for my soul!