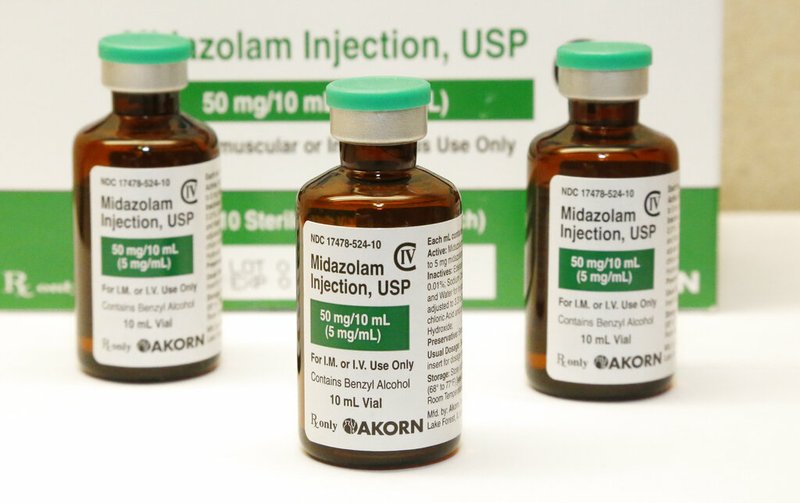 FILE - This July 25, 2014 file photo shows bottles of the sedative midazolam at a hospital pharmacy in Oklahoma City.

Several Arkansas death-row inmates asked a federal judge Friday to reopen their lawsuit challenging the use of midazolam as the first of three drugs used in lethal injections, arguing that a better drug may now be available.

On May 31, U.S. District Judge Kristine Baker threw out the inmates' lawsuit, finding that they didn't prove that the state's use of midazolam as a sedative before the administration of a paralytic and a heart-stopping drug constituted cruel and unusual punishment.

The inmates said midazolam isn't capable of sedating everyone deeply enough to keep them from experiencing suffocation and pain after the injection of the remaining two drugs.

He also asked Baker to make additional factual findings related to evidence presented during a trial last year, "which would result in changes to the court's analysis of whether the midazolam protocol causes a significant risk of harm when compared to available alternatives."

During a trial a year ago, some experts testified that pentobarbital, a barbiturate, is much more sedating than midazolam, but that manufacturers object to its use in executions, making it nearly impossible to obtain.

"The court should reopen the record to hear newly available evidence that pentobarbital is accessible to Arkansas," the brief filed Friday states. "Specifically, since the close of trial in this case, new information has emerged about how the federal government has obtained pentobarbital for four executions that it intends to carry out in July and August of this year."

The U.S. Department of Justice recently announced that it plans to restart executions in July, beginning with the execution of Danny Lee, an Oklahoma man who was convicted in 1999 in Little Rock of murder in aid of racketeering for helping kill a Tilly family as part of a mission to set up a whites-only nation in the Pacific Northwest.

Williams wrote, "Evidence produced in litigation concerning the federal government's execution plan offers a picture of pentobarbital's availability that is far more detailed than any information [the inmates] were able to produce at trial, despite diligent efforts to do so."

On July 25, three months after the trial on midazolam ended, the department announced that it had issued a new execution protocol and intended to carry out five executions in December and January. The executions were to begin with Lee's execution in December, but it was stopped temporarily by a federal judge in the District of Columbia.

On June 15, after a federal appeals court reversed the trial judge, the department again announced its intention to carry out the executions.

The department's news release, cited in Williams' brief, said that its amended protocol, "which closely mirrors protocols utilized by several states, including currently Georgia, Missouri and Texas, replaces the three-drug procedure previously used in federal executions with a single drug -- pentobarbital. Since 2014, 14 states have used pentobarbital in over 200 executions, and federal courts, including the Supreme Court, have repeatedly upheld the use of pentobarbital in executions as consistent with the Eighth Amendment."

He said the federal Bureau of Prisons intends to use a compounded form of the drug made with bulk ingredients imported from a foreign FDA-registered facility. It plans to use a compounding pharmacy that is registered with the Drug Enforcement Administration and has passed two laboratories' quality assurance tests.

"The BOP confirmed with the DEA that the BOP facility in Terre Haute, Indiana, meets the regulatory requirements for storage and handling of pentobarbital," the papers said.

Williams added that numerous supporting documents show how the government decided on pentobarbital "as the proper execution chemical and how it went about obtaining it."

He said an expert from Vanderbilt University told the government that a one-drug pentobarbital protocol would "produce a humane death with limited suffering and pain," and is the most humane option available.

Williams said the government documents show that while the Justice Department considered using midazolam, it was rejected because "several states experienced some complications with this drug during executions."

Asked for comment on Friday's filing, Amanda Priest, spokeswoman for Attorney General Leslie Rutledge, whose office defended the midazolam protocol in court, said Rutledge "is reviewing the motion to determine the next step."

Williams' filing asserts, "Arkansas could domestically obtain compounded pentobarbital with similar efforts or could locate imported pentobarbital that is newly available in light of the [government's] May 2019 opinion."

He said this constitutes new, material evidence that the inmates' attorneys "diligently sought to develop before trial and that would probably change the outcome of this case if presented now."