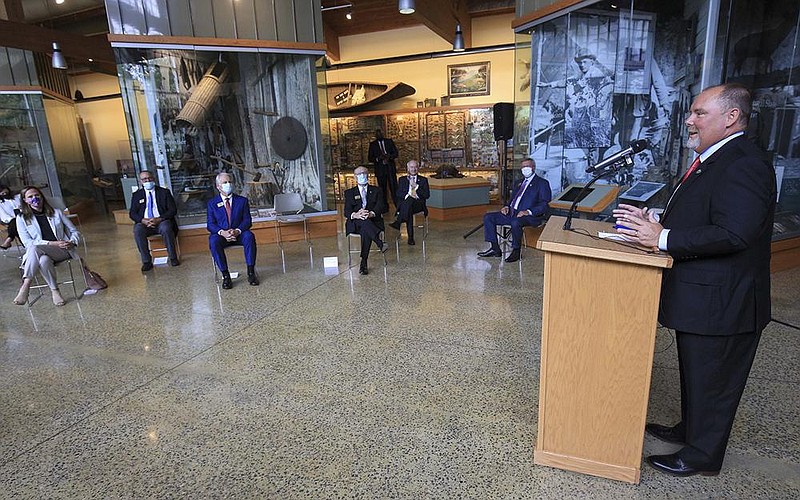 Rob Finley, a 54-year-old entrepreneur from Mountain Home, was appointed Friday by Gov. Asa Hutchinson to the Arkansas Game and Fish Commission during a ceremony at the Witt Stephens Jr., Central Arkansas Nature Center in Little Rock.

Finley was born on Eaker Air Force Base in Mississippi County and graduated from Cotter High School in Baxter County before serving in the Air Force.

"Rob's love of the outdoors is in his blood," Hutchinson said. "His grandfather owned a fishing and bait store on Portia Bay [a 95-acre lake in Lawrence County], and by the time he was 4, Rob was fishing from his grandfather's boat launch. Rob and his cousins spent hours with their grandfather learning about fishing and hunting.

[Video not showing up above? Click here to watch » https://www.youtube.com/watch?v=ceEX5_UjV_0]

"His love of the outdoors inspired a passion for conservation. He and his wife, Nicki, have been successful in a variety of businesses, including outdoor retreats and lodges. In Rob, I found the perfect mix of attributes that make him a logical pick to serve as a Game and Fish commissioner."

The Game and Fish Commission consists of seven voting members who each serves one seven-year term. An eighth, nonvoting commission seat is filled by the chairman of the University of Arkansas biology department. Commissioners are not paid.

Authorized by Amendment 35 to the Arkansas Constitution, the Game and Fish Commission is one of the state's most influential state agencies, touching the lives of most Arkansans, as well as thousands of hunters and anglers who visit from outside the state.

The wildlife resources that the agency manages generate more than $1 billion in economic activity and support thousands of jobs. Because of the agency's reach and mystique, an appointment to the commission -- though unpaid -- is considered by many one of the most coveted seats in state government.

Andrew Parker of Little Rock, the last appointee of former Gov. Mike Beebe, serves as the commission's chairman, a distinction reserved for a commissioner in the final year of his tenure. He said Finley is well-known in northern Arkansas for his passion for hunting and fishing.

"What I know about Rob is that he is an avid trout fisherman, a turkey enthusiast and a deer hunter," Parker said. "Those are all things that are important, and they go to the heart of issues of significant importance as we address the decline in our turkey population, habit issues across the state, and chronic wasting disease. We applaud the governor's appointment, and I look forward to working with Rob."

"Ripken is probably our most accomplished outdoorsman," Rob Finley said. "He is, I think, still the youngest hunter to kill a bull elk in Arkansas." It was a 6x5 bull taken in the Sonny Varnell Richland Valley Wildlife Management Area.

Route 66 Warranty is a national extended-warranty enterprise whose success is built on personal relationships, Finley said.

"I built it into a nationwide business with the largest footprint in the credit union industry," he said. "The tool I used to do that was relationships, and I use those same relationships to introduce people to hunting and fishing in Arkansas."

Finley describes himself as a natural marketer and said that trait will serve the commission to attract new hunters and anglers and to retain current sportsmen. He said creating and enhancing access to the state's fish and wildlife is a priority.

"If I could pick one thing as a point of emphasis, I think access is a key," Finley said. "Hunting public land can be tough, and getting access to private land can be tough. If you don't know someone, private access is nonexistent.

"I want to plug them in so they can appreciate it."

Even though he hadn't yet been officially appointed, Finley attended the Game and Fish Commission's round-table discussion on chronic wasting disease Thursday at commission headquarters in Little Rock. He acknowledged that the commission faces major challenges in its ongoing crisis with chronic wasting disease and diminishing revenue because of reduced participation in hunting.

Chronic wasting disease (CWD) is an incurable, untreatable degenerative neurological disease that affects deer, elk and moose. It's been detected in 24 states and two Canadian provinces. In 2016, it was detected for the first time in Arkansas in deer and elk in Newton County, where it occurs in 29% of all deer tested. For elk in Arkansas, the prevalence rate is about 6%, which is considered high.

Many of the commission's management strategies, which includes restrictions on baiting and feeding deer within the CWD Management Zone, suspension of antler point requirements for bucks, are controversial. Hunting participation has been steadily declining for decades, but some members of the commission attribute fears about potentially eating infected deer to what they believe is an accelerated decline since 2017.

Traditionally nearly 300,000 hunters pursue deer in Arkansas, making it the state's most popular form of hunting.

"I'm fully on board with making sure the right message gets out about CWD," Finley said. "Originally it could have been better explained and better defined. Now people are realizing its effects are real, but we've allowed others to tell our story."

Specifically, Finley referred to the characterization of infected deer as "zombie" deer. Dr. James Kroll, a world-renowned deer management expert who was part of the round-table discussion, said People for the Ethical Treatment of Animals coined the phrase, which he said made the public suspicious of deer and frightened hunters away from eating deer meat.

"We can't let outside organizations tell our story," Finley said.

Finley said one of his greatest joys is introducing people from other states and nations to hunting and fishing in Arkansas, which he said is underrespected outside the state.

"To bring in someone from Whitefish, Montana, who believes they have the absolute best trout fishing in the world and introduce them to the White River, to show them the health and size of the brown trout we have and then hear them admit that this is absolutely their best brown trout experience they have had and that they can't wait to come back, is extremely satisfying to me.

"Nobody can fathom the experience for trout on the White River or green timber duck hunting until they see it in person."

Raised in Lawrence County, Finley has the unusual perspective of having lived in several Arkansas ecoregions.

"I may be the most diversified blue-collar commissioner they've had," he said.

Finley said he brings no agenda to the commission, noting that his most valuable attribute is a natural inclination to listen.

"I am attuned to duck hunting guides, bass fishing guides and trout fishing guides," Finley said. "I am as likely to be gathered around a coffee table talking to them as anything else."

"To me, the challenge of public land hunting is about the experience" Finley said. "It goes back to trying to attract younger generations. Who wants to come back if there are people there who are not quite as sociable, people that don't play nice? I've seen that a few times."

"You'll find that our guides up there are very dialed into the conservation part of that," Finley said. "It is what's made that river what it is over the last 20 years. Twenty years ago you could keep one brown trout, and every guide did. They realized that every one of those fish are Chamber of Commerce 100 dollar bills if we turn those loose and continue to catch them."

To further improve the White and North Fork rivers' potential, Finley said he is interested in creating or expanding special regulations zones. He said he also wants to address the damaging effects that night fishing has on trout.

"That's probably more catastrophic to our big brown trout than anything, and it's also a navigation hazard," Finley said. "I've seen boats with big outboards flying up the river at night with only one generator running, and it just blows me away knowing they are a rock away from complete disaster."

At the end of his seven-year term, Finley said, he wants to ensure that everyone interacting with the outdoors has an enjoyable and positive experience." 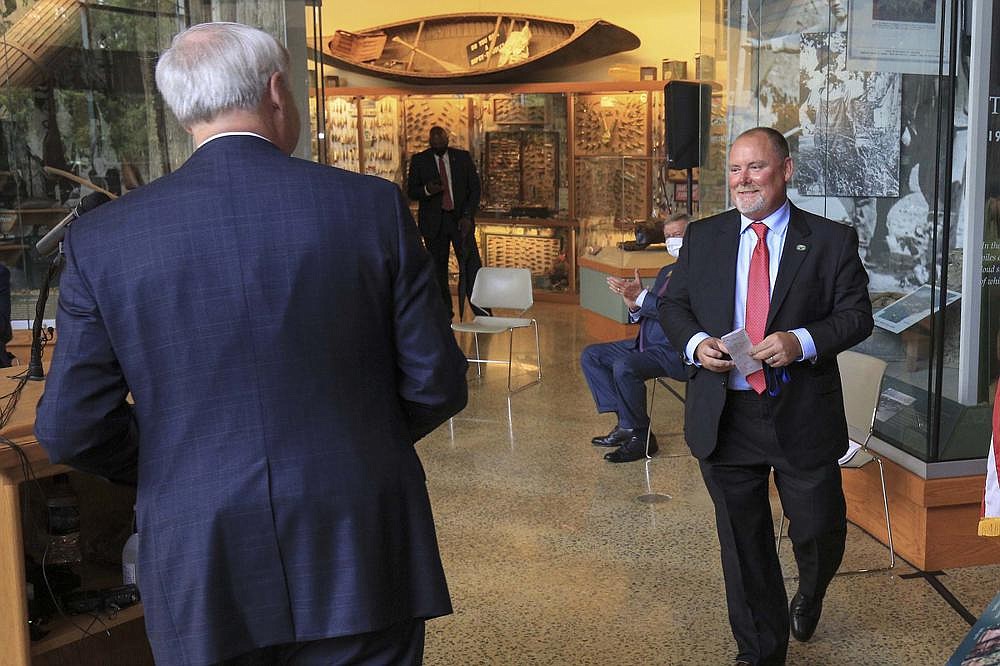