Protesters face off over statue of St. Louis' namesake 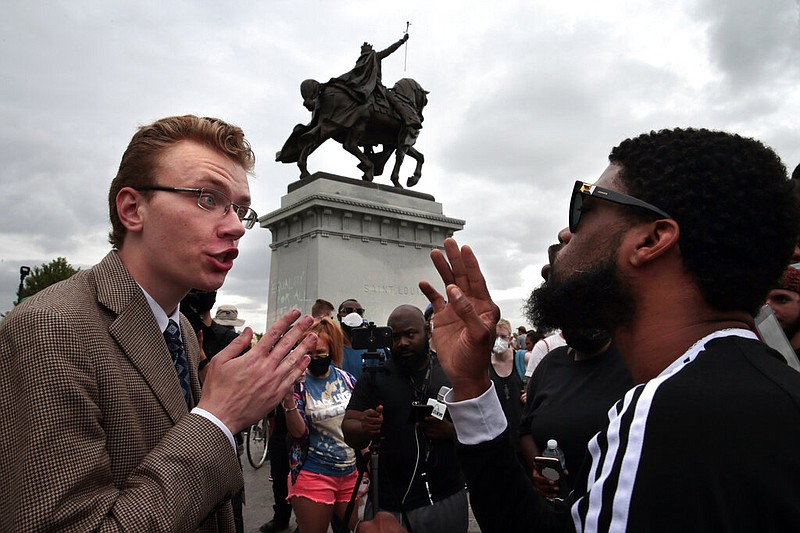 Mark Williams (left) of Sullivan, Mo., debates the worthiness of a statue of King Louis IX, the namesake of St. Louis, in Forest Park, St. Louis, with a man who gave his name as Horus during a rally at the top of Art Hill on Saturday, June 27, 2020. "This is hate against the Catholic church," said Williams, calling for a conversion of St. Louis residents. "If 99 percent of people are Catholic, our racial problems go away." (Robert Cohen/St. Louis Post-Dispatch via AP) (St. Louis Post-Dispatch via AP / Robert Cohen )

ST. LOUIS — Protesters on Saturday called for the removal of a statue of St. Louis’ namesake, a French king-turned-saint who burned manuscript copies of Jewish religious texts during the Middle Ages, while another group prayed for the monument to stay.

Nearly 200 people gathered at the Apotheosis of St. Louis, the formal name for the statue of King Louis IX atop Art Hill in Forest Park while about a dozen police officers stood between the two groups, the St. Louis Post-Dispatch reported.

A few altercations happened, with one man swinging punches at another, but no one appeared to have been hurt. Police ordered another man to leave after he became angry over someone grabbing his hat when he refused to stop taking pictures.

Louis IX, the only king of France to be canonized in the Catholic Church, was lauded for giving aid to the poor and founding hospitals. But critics say he also presided over a mass burning of wagon loads of handwritten volumes of the Talmud and took part in two crusades in effort to retake previous Christian holdings from Muslims.

“The lines are clear,” said Umar Lee, one of the protest leaders, who converted to Islam at 17. “We have one side calling for the removal of this hateful man to create a city of love.”

Lee said he started a petition drive to remove the statue and rename the city. Meanwhile, Catholics have been praying at the park every night this week, hoping the statue stays put.

Maria Miloscia, 25, of Jefferson County, stepped up and onto the base of the statue and stood for at least an hour, quietly praying and singing religious songs to herself Saturday. She said St. Louis, in her view, represents Christ. She said she also believes the defacing of statues could easily devolve into the destruction of buildings or the murder of people.

The protests over King Louis IX’s statue comes amid calls across the country to remove other monuments, particularly those honoring Confederate leaders. About three years ago, St. Louis removed a Confederate statue in Forest Park. A statue of Christopher Columbus came down from its Tower Grove Park pedestal not quite two weeks ago.