Ailing Texans feared to be affected; 2nd blast from Africa set to veil Caribbean by ANDREW FREEDMAN AND MATTHEW CAPPUCCI THE WASHINGTON POST | June 27, 2020 at 4:03 a.m. 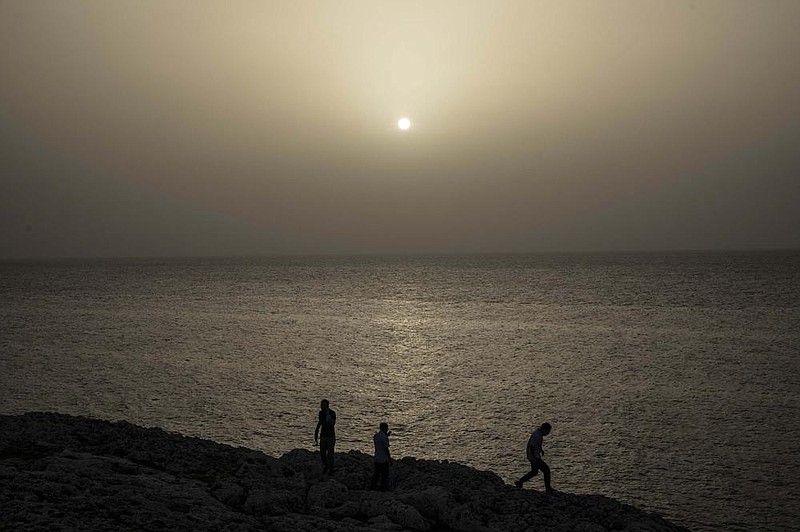 People watch the sunset Wednesday in Havana while a cloud of Sahara dust hangs in the air. The dust cloud is affecting air quality in much of the southern United States. (AP/Ramon Espinosa)

The most far-reaching and potent outbreak of dust from the Sahara Desert in decades has begun to significantly affect the Lower 48 states, with air quality deteriorating markedly on the Gulf Coast on Friday.

The dust, which hitched a ride along a ribbon of east-to-west winds about 5,000 miles from the Atlantic coast of Senegal and Mauritania, contains enough small particles at low altitudes to make air quality unhealthy, particularly for those with medical conditions, such as lung and heart ailments and asthma.

In Texas, which is battling a sustained increase in coronavirus cases, the simultaneous decline in air quality in highly populated areas such as Houston could add to the symptoms experienced by those who contract covid-19.

The plume, which departed Africa on June 14, is part of a phenomena that develops every year around this time off the coast of Africa, known as the Saharan Air Layer, but the current one is unusually intense and far-reaching and is setting records.

The air layer typically forms over the Sahara Desert from the late spring into the early fall, and it moves pulses of dust cocooned in areas of dry air out into the tropical North Atlantic every few days.

Hurricane forecasters closely track these outbreaks, because such air masses can prevent incipient storms from forming and choke existing storms, starving them of moisture, until they meet an early demise.

It is common for dust to be blown from the Sahara Desert in Northern Africa and reach the Lesser Antilles and Gulf Coast, where it can cause captivating sunsets. But it is rare for such events to dramatically lower visibility and lead to air-quality problems, which have occurred with this event.

It's even rarer still for these events to affect so many areas, from the Leeward Islands to Puerto Rico, Hispaniola, the Gulf Coast and eventually much of the Southeast and possibly even the mid-Atlantic states.

Satellite imagery and surface air-quality data shows the dust is probably present in moderate to high concentrations over the western Gulf of Mexico, overspreading much of eastern Texas, parts of Louisiana and Mississippi, and even into southern Alabama and the panhandle of Florida.

A number of places already were beginning to report reductions in visibility commensurate with dust-induced haze, but more significant drops are likely as the dust begins to build northward.

Meanwhile, a second wave of dust scooting west over the Atlantic had already drawn its veil over the Leeward Islands early Friday, with Puerto Rico next in line and the Dominican Republic to follow by today.

The current wave of dust was expected to cover much of the South by late Friday, meaning cities such as Houston; New Orleans; Jackson, Miss.; Alabama's Birmingham and Huntsville; Atlanta and Jacksonville, Fla., were likely to see effects. Even western and central Tennessee could be clipped by the main areas of dust.

The dust particles will pivot clockwise around an area of high pressure over the Gulf of Mexico, and this will place the largest concentrations across Florida today -- though some dust could linger over eastern Texas and parts of the South in slightly diminished quantities.

By Sunday, the hazardous air-quality threat related to this dust event will be a largely Florida event, with the dust eventually emerging off the Atlantic coastline.