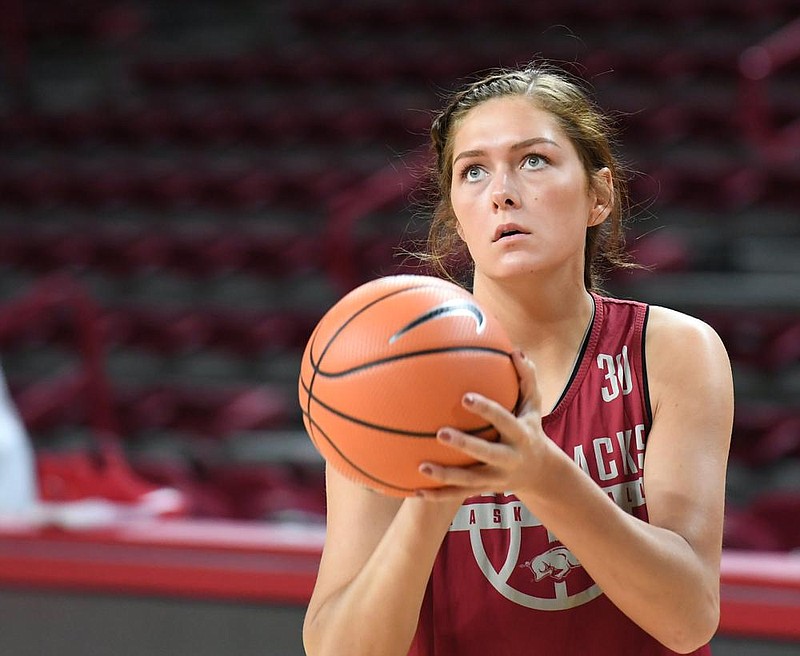 Before signing to play basketball at Arkansas, Macy Weaver was a high-level high school softball player at Stillman Valley, Ill., where she was a catcher before outgrowing the position. (NWA Democrat-Gazette/Charlie Kaijo)

FAYETTEVILLE -- Stillman Valley, Ill., is a town of just more than 1,000 people, roughly two hours from downtown Chicago and a half-hour from the Wisconsin border.

And it's the hometown of a big personality: Razorback basketball player Macy Weaver.

"I'm very outgoing," she said. "I just feel like I'm very friendly and easygoing and easy to talk to"

Weaver's journey from small-town Illinois to Northwest Arkansas is a small part of the senior's evolving story. She started playing competitive travel sports when she was 9 years old, but it wasn't on the hardwood.

"When she was younger, it seemed like softball was kind of natural to her," Weaver's high school assistant softball and basketball coach Bob Mellon said. "It was an easier thing for her to play."

Weaver possessed two things that made her an ideal softball talent: a strong arm and quick bat.

"She had probably one of the strongest arms that I've ever seen any softball player have, and I've coached a lot of girls," Mellon said.

He recalls a particular instance when Weaver showed off that arm strength. After chasing down a ball at the outfield fence, Weaver picked it up and fired it home on one bounce.

Her strong arm also worked against her, as she had a hard time keeping a throwing partner.

"Not many girls wanted to play catch with her because she threw so hard," Mellon said. "Her father told me as a freshman that she was going to be a lot better softball player than a basketball player, and at the time I said, 'Yeah, you're right.' "

Weaver began her softball career as a catcher, but by the time she was in high school her height had Mellon thinking she could play a different position.

"We tried it, and if you ever ask her she'll start laughing," Mellon said. "She was just all over the place, scaring girls because she couldn't throw it straight."

With pitching and catching no longer options, the coaching staff at Stillman Valley High School decided to move Weaver as far away from the plate as possible. Coaches liked her speed, so she moved to the outfield.

Weaver wouldn't spend much time in the outfield before she was moved again. This time she transitioned to first base.

"When you think about her arm, you think, 'Wow, you're wasting it,' " Mellon said. "But a 6-3 girl that can almost do a split [along with] her stretching and her glove skills, it helped us out big time."

Her strong arm wasn't the only upside to Weaver's softball skills. In her own words, "I hit dingers."

According to Mellon, Weaver batted .428 and hit more than 40 home runs in her career. She also led the team in triples in two of her four years at the school.

About the time Weaver's sophomore year rolled around, she started to focus more on basketball.

"In seventh grade, I was very awkward," she said. "I mean, I'm still a little clumsy and stuff, but I [hadn't] grown into my body yet -- if that makes sense -- because I was just so tall."

After gaining coordination, Weaver began to put the time into becoming a great basketball player. She joined an AAU basketball team while still playing summer softball and practicing her other sport, volleyball.

"I was wearing myself down," Weaver said. "But I'm just trying to make myself better."

Weaver's better play on the basketball court started to become apparent to Mellon.

"There was a stretch of time in the beginning of her junior season [when] we were playing some really talented schools, and she's playing against some big-time posts," he said, "and not only was she holding her own, but she started to dominate on some things."

Not long after that Weaver started to get some high-level Division I looks. Weaver committed to Wisconsin over Arkansas and Missouri during her junior year, but that didn't stop her from continuing to play softball and volleyball.

"Some people say, 'Hey, don't play any other sport. Just play basketball. Don't play softball because you could hurt yourself,' " Mellon said. "Not her. She was just like, 'I'm playing because I love it.' "

"Everybody would always ask me, 'Macy, what's your favorite sport?' " she said. "I don't have a favorite sport. I don't really know. I enjoy everything."

When asked whether she could have gone on to play college softball, Weaver simply replied: "Yes."

Because of her early commitment, softball coaches didn't offer Weaver, but her coach agrees with her. She could have gone on to play at a high level.

"Could she have gone somewhere? Could she get D-I looks in softball? Yeah, I think she could have," Mellon said. "But I think coaches were looking at [her interest in basketball] and saying, 'OK, there's no way we're going to get her for [softball].' "

Later during Weaver's junior year, the same year she had committed to Wisconsin, Badgers Coach Bobbie Kelsey was fired.

Weaver reopened her recruitment and decided to play basketball at Arkansas.

"I actually have family that lives in Rogers," Weaver said. "So when I was being recruited, I just thought this was a great opportunity to be close to family, and I'm a business supply chain major. With [the university] having the Sam Walton College of Business, it was just a no-brainer."

Weaver played in 32 games as a freshman and sophomore, scoring 41 total points, before an injury ended her 2018-19 sophomore campaign early.

Weaver tore the ACL in her left leg in March 2019, but before she was fully recovered from that injury she broke her right foot in September.

"It was really hard because I wasn't even cleared from my ACL yet," she said.

Weaver missed all of last season, but she hopes to return to the court in 2020-21.

This is the second in a series detailing the other sports Arkansas athletes could have played collegiately.