Volleyball has taken off in last quarter century in Arkansas 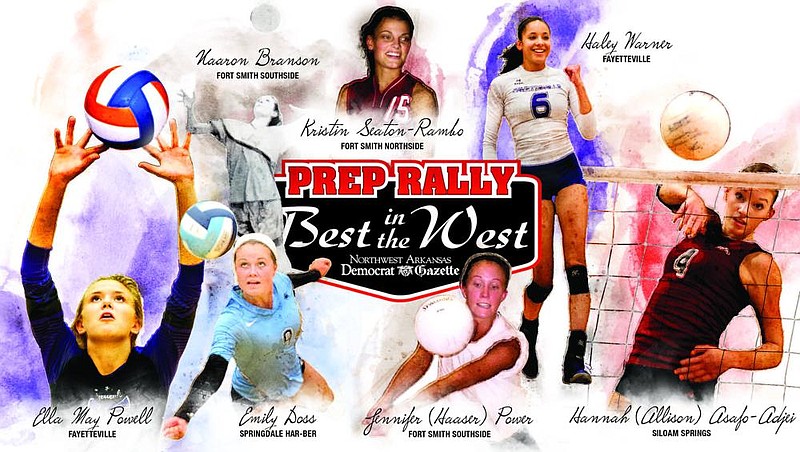 When the volleyball program began at the University of Arkansas in 1994, only two high schools north of Mountainburg offered the sport.

A little more than a quarter-century later, Northwest Arkansas is home to some of the best prep volleyball in the state and players have garnered attention from high-caliber college programs from across the country.

Our Best in the West team has firepower galore. Hard-hitting Haley Warner of Fayetteville is one of only three players from Arkansas to be selected to the U.S. Junior National team. Jennifer (Haaser) Power and Naaron Branson helped to build Fort Smith Southside into a state power.

Setters Ella May Powell and Hannah (Allison) Asafo-Adjei can deliver the ball with the best. Powell teamed with Warner at Fayetteville to win three consecutive state titles, while Asafo-Adjei helped Siloam Springs win four in a row. Both also were also selected to represent Team USA twice.

Kristin Seaton-Rambo could spring from the floor and put the ball down with the best of them, too. She helped Fort Smith Northside to multiple conference titles while battling crosstown rival Southside. Emily Doss anchors the defense and helped Springdale Har-Ber make three consecutive state finals appearances.

While the other players on this list are working to put the ball to the floor, it's Doss, who will be a senior in the fall at Central Arkansas, at only 5-foot-5 who's working to keep it up.

Shyrah Schisler, who coached her at Har-Ber, said her mentality was what made Doss special on the court.

"She was not going to let the ball drop or get past her," Schisler said. "She found a way to get it done and didn't look to someone else. Emily also had a presence that made everyone around her better."

All seven players went on to play at the Division I level. Power's name remains all over the record books at Arkansas as does Branson's at Missouri.

"In this area, she was probably the first volleyball specialist star," Haaser said. "She was 5-10, left-handed and I guess you would say wiry and strong. She had a really powerful arm swing. But what set her apart I believe is she had a passion for the game and the way she played was contagious and it rubbed off on her teammates."

Power, a sophomore on that '97 championship team and anchored another in '99, said having her father as her coach was never a problem, Power said.

"I'm sure I was a little too silly for him," Power said. "But I grew up in that gym. I couldn't wait to be on his team."

But she also recalled still getting Haaser's coaching side, rather than father, after she went on to play at Arkansas.

"There were times I'd call crying or just exhausted and he would remind me 'it's your job,'" Power said. "That's when I would say 'Can you put mom on?'"

Chris Poole, who started the Arkansas volleyball program, said Power was a trailblazer as an Arkansas player at the time as his first in-state recruit. It didn't hurt she grew up not far from Fayetteville either.

"Jennifer was the first one we looked at that was at a level we through could help us win an SEC championship," Poole said. "It was a big boost for us to get not just an Arkansas player but a local player."

The sport has grown tremendously in the last two decades as players like Asafo-Adjei (Texas), Powell (Washington) and Warner (Florida) have gone on to play at big-time college programs. Asafo-Adjei helped the Longhorns to a national championship in 2012 and two more trips to the Final Four. Powell earned third-team All-American honors just last year as a sophomore for the Huskies.

Poole points to the development of the Ozark Juniors volleyball club, which helped get athletes involved with the sport at a young age, and the high school coaches in the area -- several of which are his former Razorback players.

"Some of the best teams in the country are now coming to recruit players from Northwest Arkansas," Poole said. "I take a lot of pride in that. That was kinda my baby."