A gun for all seasons 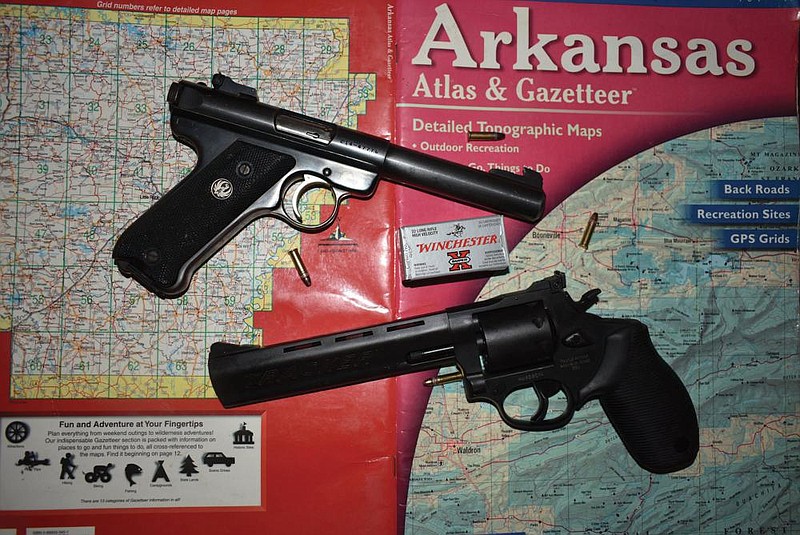 For hunting and plinking, the author prefers a 1988 Ruger Mk. II (top) and a Taurus Tracker, which also has a .22 WMR cylinder. Both are very accurate and easy to shoot. (Arkansas Democrat-Gazette/Bryan Hendricks)

If you're a first-time gun buyer or a lifelong gun owner, you can't go wrong with a .22.

We're talking about rifles or handguns chambered in the tiny but versatile .22-caliber Long Rifle cartridge. You can use them for plinking soda cans and plastic soda bottles, for more formal target shooting and for hunting squirrels and rabbits. Trappers use them to dispatch fur-bearing animals that they catch because of the minimal damage it does to a pelt. Farmers use them to kill rats and other pests that eat chicks and eggs.

There are a lot of .22-caliber cartridges in the world. The 220 Swift, a high-performance rifle cartridge, is the fastest, with some loads clocking in at more than 4,000 feet per second. The .22-250 Remington is comparable to the Swift, but in a smaller package. One tier down in speed are the 222 Remington, 222 Remington Magnum, the 223 Magnum and the 5.56x45 NATO. The latter pair are very similar in all respects and are the standard chamberings for the AR-15, making them two of the most popular cartridges for recreational shooting. They are also very popular for deer hunting, and they are very effective within limits.

All pale in comparison to the little .22LR in popularity and longevity. Designed in 1884, the cartridges are inexpensive, so you can afford to shoot them a lot. They are comparatively quiet, so they are not as obtrusive as the centerfire 22s. They have virtually zero recoil, making them suitable for shooters of every age and experience level.

As a rule, the .22LR contains a 40-grain bullet stuffed into rimmed, straight-wall case that is .613 inch long. The .22LR is a rimfire cartridge, as are its smaller relatives the .22 Long and the .22 Short.

Unlike its centerfire brethren, the .22LR impresses nobody with its speed. Most ammo has listed muzzle velocities of 1,500-1,675 feet per second. The fastest .22LR ammo is the CCI Copper, which is advertised as launching a 21-gr. bullet at 1,850 fps.

Keep in mind that these velocities are attainable only in rifles whose long barrels burn all of the powder and build up sufficient pressure to attain maximum velocity. Muzzle velocities from handguns are slower. Pistol-fired bullets lose speed quickly and drop precipitously over 100 yards.

Terminal performance of a .22LR. bullet is unique. Larger caliber deer hunting bullets from .243-inch and wider form a mushroom when they collide with a target. The bullet mostly stays intact as it travels through the target. Varmint bullets used for the 22-cal. centerfire cartridges explode on impact, but some, like the Nosler Partition, function the same as larger diameter bullets.

When a .22LR bullet hits an obstruction, it flattens into a disc, and its path through a soft target is wildly unpredictable.

Experienced shooters often own several .22LR guns. Some are utility pieces for duties that are impractical for larger cartridges. These are often pistols -- semi-automatic or revolver -- but they are just as likely to be a semi-automatic rifle.

Experienced gunners usually own at least one .22LR for hunting. It is often a semi-automatic, but there are also many fine .22LR bolt-action rifles.

Even the most dedicated medium-bore enthusiast who hunts deer with a .30-cal. cannon probably has a fine .22LR for target shooting. These guns often wear top-quality multi-power scopes. My rifle in this category is a CZ 452 Lux, with a 28-inch barrel and target grade adjustable sights on the front and rear. The iron sights are so accurate that this rifle has never worn a scope.

The benefits of shooting a .22LR are many. Because of the low noise and recoil, it does not cause a shooter to flinch. It promotes proper trigger control and follow through, enabling a shooter to cultivate a steady, solid shooting form that transfers directly to shooting larger, heavier recoiling deer rifles and shotguns.

Football players have a saying that you play as well as you practice. I adhere to that adage by shooting about 100 rounds of .22LR per week, which includes hunting squirrels in the spring and fall. The price for 100 .22LR cartridges is $6-8. It's a lot of fun, but it also increases the odds of a satisfactory outcome when a buck steps into the open in November.