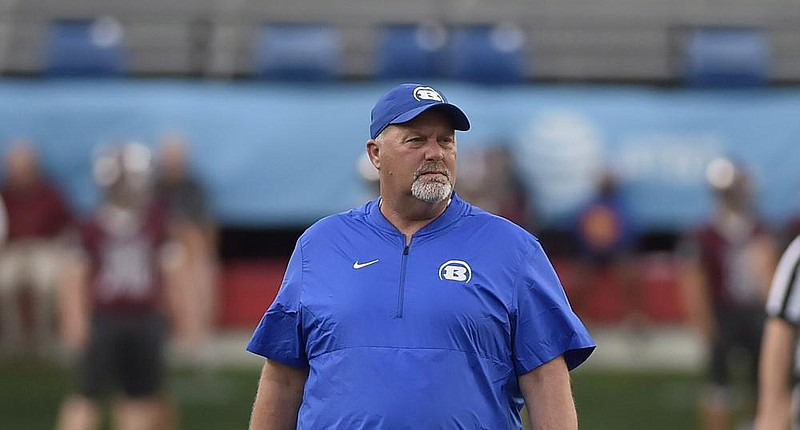 When Bryant hired Buck James as its football coach in 2016, Athletic Director Mike Lee said the Hornets were looking for someone who could win a state championship.

Two state championships later, James is regarded as one of the state's best football coaches.

Bryant was the state's top football team in 2019, going 13-0 and winning its second consecutive Class 7A state championship. The Hornets were the Arkansas Democrat-Gazette's overall No. 1 team, regardless of class, for the entire season.

For his efforts, James is this year's Arkansas Democrat-Gazette All-Arkansas Preps Coach of the Year.

"It's an honor," James said. "I'm very honored for our school, our community, our players and our coaches. The head coach is just a reflection of the administration, community, players and coaches. Our coaches go above and beyond. They're very hard-working and loyal to the kids."

Lee said James is a consummate professional and leader.

"He's got old-school principles he holds still," Lee said. "He has a knack to attract others. He's really a home-run guy."

James is one of three active coaches in Arkansas to win a state championship at two different schools, as he also won a Class 5A state title at Camden Fairview in 2012. The other active coaches are White Hall's Bobby Bolding (2002 at Stuttgart, 2014 and 2015 at Pine Bluff) and Springdale Har-Ber's Chris Wood (2001 at Shiloh Christian, 2009 at Har-Ber).

Bryant's offense averaged 43 points per game, with a 3,000-yard passer in junior Austin Ledbetter, a 1,000-yard rusher in senior Ahmad Adams, and a 1,000-yard receiver in senior Jake Meaders. The defense was one of the state's best, allowing 8.7 ppg.

Ten of Bryant's 13 games finished via the mercy rule, in which the game clock runs continuously when a team gets ahead by 35 points or more.

James and his staff demand hard work and accountability on and off the field, including in the weight room. He's referenced the late actor John Wayne during his tenure at Bryant, saying the Hornets needed to play "John Wayne football" if they were to win a state championship.

"A lot of young men sold out for this," James said. "They worked as hard as they could. They bought into the system. It just proves that the system works."

Bryant not only has proven itself as one of Arkansas' best programs under James, but it is also branching out beyond state borders. On Sept. 18, Bryant is scheduled to host Trinity Christian, a private school in suburban Dallas that features Pro Football Hall of Famer Deion Sanders as offensive coordinator and his son Shadeur at quarterback.

Lee said the Hornets are establishing a reputation outside of the state.

"Our mission as a football program is to be recognized nationally," he said.

James also has used the slogan "212", which means one degree above boiling water. He said he saw the slogan at a Walmart business meeting in 2006. It's a mindset Bryant's players have adopted for their play on the field, he said.

"It gives you a battle cry. It's a great metaphor for success," James said. "You get that water boiling and get that extra degree. It's a reality of what it takes to be great."