County lays out ideas for election 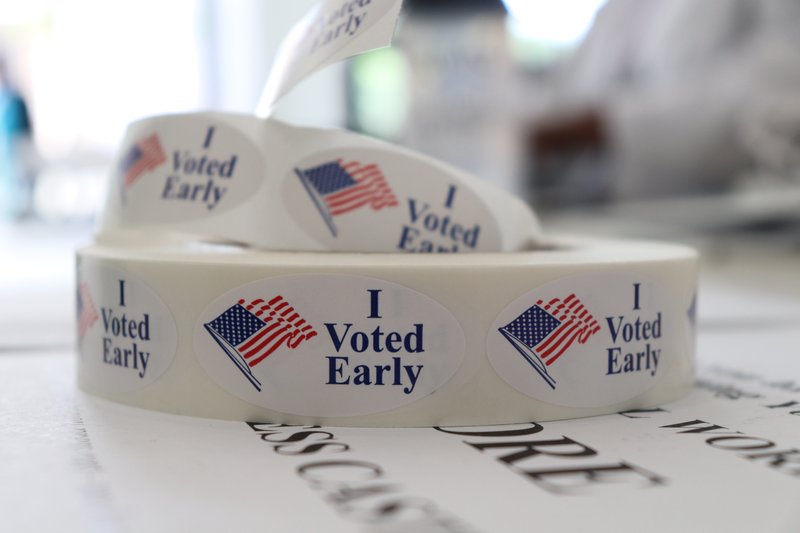 A roll of stickers awaiting distribution to early voters sits on a table at the check-in station at the Pulaski County Courthouse Annex in Little Rock. (AP Photo/Kelly P. Kissel)

In Arkansas' most populous county, election difficulties are magnified by its more than 251,000 registered voters who will cast their ballots in an area with what is now the state's third-highest number of coronavirus infections.

"We expect it to be a huge turnout in November -- it's a presidential election year; obviously there's a lot going on," election commissioner Joshua Price, who is a Democratic appointee, said Thursday.

The plan incorporates approaches first used during a June 9 special election for a Jacksonville City Council seat. While not yet finalized by election commissioners, it outlines measures for training poll workers, for early voting and for Election Day, including:

• Poll workers would use tape to mark off 6-foot increments separating voters in line, and a worker would enforce physical distancing. Doors are to be propped open, and voting stations set 6 feet apart.

• Poll workers would wear masks and gloves, and voters using machines with touch screens would be offered single gloves or finger covers. Voters using a pen to sign ballots or poll books would keep the pen. There will be no "I voted" stickers on Election Day.

• Masks would be offered but wouldn't be required, commissioners said. It's not yet clear how a mandatory mask policy announced Thursday in the city of Little Rock would affect that policy.

"Elections are supposed to be free. So putting a requirement on voters is not something we feel comfortable doing," commissioner Kristi McKinnon Stahr, a Republican appointee, said at a meeting last week.

Maskless voters could vote in a separate area, Price said.

Price said he has received calls from concerned voters fearing that some polling sites would close, as was seen in a June primary election in Kentucky. "That is not on the table; that has not come up," he said.

"We saw what happened in Wisconsin, and we don't want something like that to happen here."

As the virus first spread in the U.S., Wisconsin opened just a fraction of its polling places for an April primary, leaving voters waiting in line for hours, and seeding infections among voters and poll workers, reports said.

Overall, the Pulaski County election plan's procedures to deal with the covid-19 pandemic show the challenges local officials face as the state considers changes to elections processes in response to the public health threat.

A spokesman for the Arkansas secretary of state's office said costs that result from the Pulaski County election proposal will be covered largely by a $4.8 million federal grant that can be used only for covid-19-related election expenses.

The office has received information from more than 60 of 75 counties about personal protective gear and other equipment they need to run elections safely, the spokesman said. Secretary of state staff members hope to procure and distribute that equipment by August.

Some counties -- including Pulaski, which has purchased gallons of hand sanitizer -- also have stockpiled supplies of their own, the cost of which might be reimbursed. An estimate of that spending by the county was not immediately available last week.

Election commissioners are to discuss the plan in more detail at their July 7 meeting, held the night of a special runoff election for the Jacksonville council seat.

As November approaches, talk of the general election has come up more often at Pulaski County election board meetings.

"To be honest with you all, I'm concerned with being able to retain the sites that we have now," he said. The sites -- often churches, community centers or schools -- volunteer their spaces, and some appear "quite reticent," he said.

That also may be true of poll workers, Poe warned.

Elections staff members will be making calls in July to learn "who's going to be available to us in November, who's wavering, and who outright just doesn't want any part of it."

Part of the challenge is that many of the county's poll workers are at higher risk of serious illness from covid-19. Price says their average age is 73, and there are more who are over age 90 than from the 18-25 age group.

"We would love to have some younger poll workers, from a generation that's not as vulnerable to this virus," he said.

Information about signing up to work polls is available online at votepulaski.net.