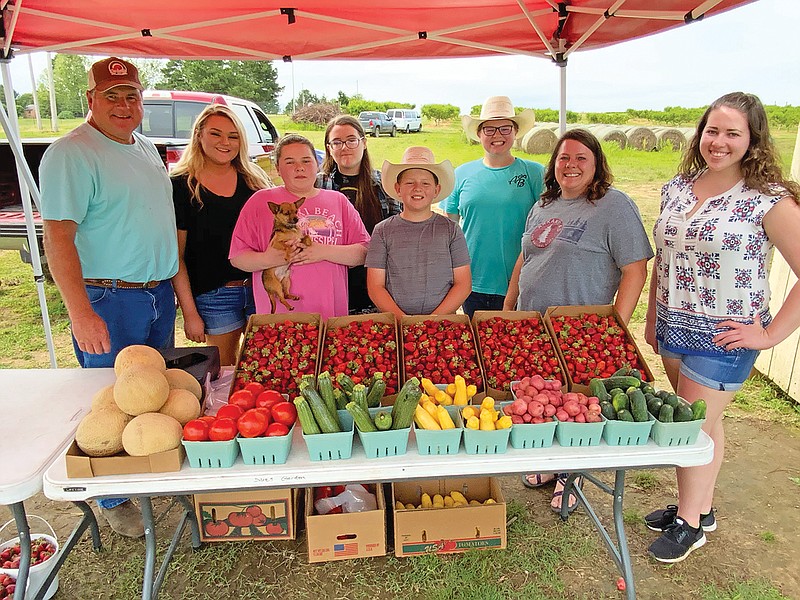 The Tom Henry family of Guy is the 2020 Faulkner County Farm Family of the Year. The family includes, front row, from left, Tom, Caroline, Gabe, Jamie and Morgan; and back row, Scout, Savannah and Katie Henry. Not shown is Alexis Henry, who lives in Kansas. The family raises a variety of fruits and vegetables, as well as cattle.

Tom and Jamie Henry both grew up on farms. He grew up in southeast Kansas, learning about cattle. She grew up in Guy, learning about row crops. They combined their knowledge when they married 16 years ago and are now the 2020 Faulkner County Farm Family of the Year.

Jamie, 41, is a daughter of the late Jimmie and Faye Battles, former owners of the farm she and Tom now own — Cadron Crest Orchard. The Battles family was Faulkner County Farm Family of the Year in 1999.

“Tom and I both are very excited about the farm-family honor,” Jamie said. “I know my parents would be very proud of us, too.

“Tom is a great father and a hard worker,” Jamie said. “Farming is not a glamorous career. We work from daylight to dark.”

The Henrys have a blended family — Tom, 56, has three adult daughters, and together, he and Jamie have three daughters and a son. Morgan Henry, 26, is a nurse at the University of Arkansas for Medical Sciences in Little Rock; Scout Henry, 24, just graduated from the University of Arkansas at Little Rock with a bachelor’s degree and works at Baptist Heath, planning to get a master’s degree in psychology; Alexis Henry, 21, lives in Kansas and is an office manager; and Savannah Henry, 15, Caroline Henry, 13, Katie Henry, 12, and Gabe Henry, 11, all attend Guy-Perkins schools.

The Henrys’ farming operation includes 1,450 acres of rented and owned land. They currently raise peaches, strawberries, apples, grapes, watermelon, cantaloupe and garden vegetables, which are all irrigated. They also have a mixed-breed cow-calf operation of 250 cows, averaging 245 calves per year.

Cadron Crest Orchard, which is normally a U-pick operation, advertises the crops through Facebook, newspapers, radio and signage. The livestock is marketed through stockyards.

“We bought the farm from Mom and Dad when they retired in 2004,” Jamie said. “We’ve made some improvements. We’ve added a new variety of peaches. Among our best-sellers are the Red Haven and the Loring. We just finished with our strawberry season, and blackberries will be ready at the end of the month. We also plan to plant our first blueberry crop in the fall.

“And we have just about every garden vegetable, including tomatoes and sweet corn,” she said.

Tom said the family’s goal at Cadron Crest Orchard is “to produce the highest-quality fruits, vegetables and meats for our customers.” He said other improvements to the orchard include updating irrigation, improving frost-protection methods and updating peach varieties.

“To help protect the environment, we have changed all our lighting to LED lights,” Tom said. “We also use different types of grass seeds to prevent grass erosion and enrich the soil. Another thing we do to help the environment is changing our irrigation to sprinkler heads that use less water.”

Jamie said the couple hope to open a farm store in the future, where they can offer their produce, as well as their beef, pork and chicken.

“We are talking about it,” she said. “We just have to decide where we want to do this.

“Our daughter Katie and our son, Gabe, are raising bottle calves to sell,” Jamie said. “And our daughter Caroline has raised laying hens and sells fresh eggs.”

Jamie said they also hope to put in a high tunnel “so we can plant our vegetables earlier for customers to have fresh produce earlier in the year.”