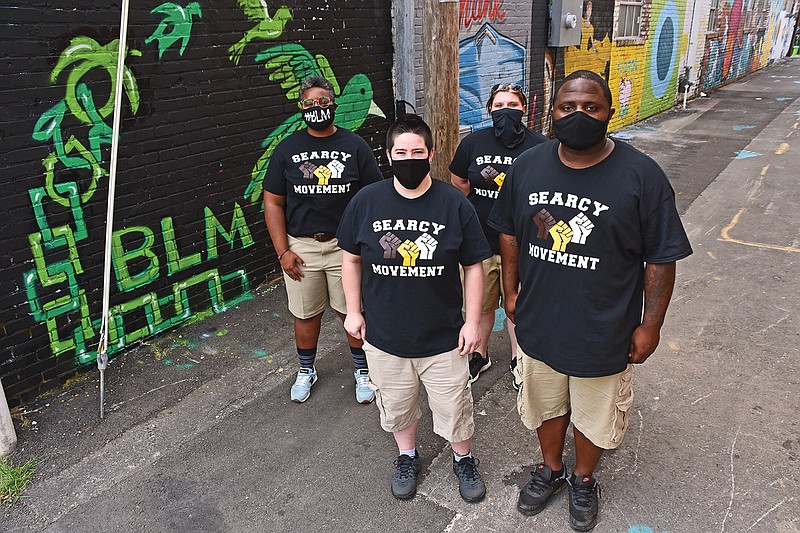 Organizers of the Searcy Movement stand in front of a “Black Lives Matter” mural in downtown Searcy. In the front row are Lydia Bumpous, left, and Leroy Sanders; and in the back row are Shantel Davis, left, and Shamra Selms.

In the middle of an Arkansas summer, sweating from head to toe, Shantel Davis stood on the front lawn of the White County Courthouse in Searcy with a sign that said, “When hate is loud, love must not be silent.”

“One guy stopped and prayed for us, for protection and justice,” Davis said. “I felt good and strengthened from his prayer.

“For the most part, everyone was supportive and honking and giving us a thumbs-up.”

Davis said she was part of a group of peaceful protestors following the death of George Floyd.

It was seven years ago, when Davis was part of a women’s football team out of Little Rock — the Arkansas Wildcats — that she met Lydia Bumpous, one of Davis’ teammates.

“From that, we formed one of my closest friendships,” Davis said. “We both had just enough grit to keep each other grounded.”

After the death of Floyd, Bumpous made a post on Facebook, saying “Black Lives Matter to me.” Davis said she and Bumpous exchanged text messages, and on the evening of May 31, Bumpous asked Davis if she would be interested in doing a peaceful protest with others.

“I was hurting deeply and asking how people can be silent about the murder of this man, but verbal about the riots and looting that were taking place,” Davis said. “The Searcy Movement started as a protest, but as the protest continuously grew, our leaders decided this should be called a movement because it is bringing awareness and change to our community and dealing with the oppression of Black people.”

Davis said that to follow COVID-19 guidelines, she wore a mask each night of the protest and encouraged all participants to wear one. She also said that anyone who became unruly was asked to leave.

The group had originally planned to hold a Juneteenth celebration last week, but due to the COVID-19 pandemic, the celebration was canceled. According to www.juneteenth.com, Juneteenth is a commemoration of the ending of slavery in the United States.

Davis said there are plans for future events, including vendors and performers, but organizers do not want to announce their plans publicly at this time, but said to expect celebrations of all cultures.

“We are primarily focused on persons of color and Black oppression, but we are not limited to this,” she said. “The fight is long from over, but we feel we have made a significant impact on this community, and we have a great group here to be able to move forward with change.”

Lee Jones, 75, of Searcy said she joined the movement and the protest on the second night. She said she has been a feminist all her life and has been very active in trying to get equal rights for women and anyone who doesn’t have the same rights as white men.

“I grew up in a patriarchal household. I was the oldest, but my brother was the favorite,” she said, because he was male. “As a result, I’ve always been on this side.

“It is natural for me to be up front with the Black movement, the LGBTQ groups. I’m very comfortable there.”

She said this is the first time she was in a place and situation where she could actually participate in a movement. She said the group, which included her daughter and great-granddaughter, stood around the White County Courthouse as a visual presence.

“I just think it is the right thing to do,” Jones said.

”To see the older generation out there to support the Searcy Movement, it left me speechless and brought joy to my heart to know they were toiling with me to bring police brutality and racism to an end,” Davis said.

The Searcy Movement group is used to help organize and share information for peaceful protests and movements. Davis said that when the movement started on Race Avenue in Searcy, she had no idea that it would take off.

“We were nervous,” Davis said. “We didn’t know what to expect. We only knew it was time to speak up and be heard, all while doing it in love and peace.”

Each week, they met at 6:30 p.m., and to her surprise, they had people stop and donate water, food and snacks to the protest group.

“The response has been shocking,” she said. “I am surprised by the number of people who have asked to join the Searcy Movement Forum. I didn’t expect anyone to thank us, share personal stories or apologize.

“My drive comes from personal experiences such as racist teachers, being racially profiled by police officers as a teenager and being constantly watched or followed in stores while shopping,” Davis said. “I no longer want to not speak out for fear of being labeled a troublemaker.

“I should not be fighting the same fight that my older-generation family members once told me about, but here I am.”

She said the hurt she is feeling is being healed with the change she is trying to bring to the community of Searcy. She said the struggles of the Black community include the fair-housing market, lines of credit at banks, fear of police brutality and “not being able to trust in a system that is supposedly built for justice.”

“Although many marginalized and underrepresented communities experienced some form of prejudice or racism, I don’t believe that historically, any other group of people have been subjected to such aggressive, unfair treatment and the continuing unfavorable effects as much as Black people,” Davis said. “Part of why these types of struggles are so insidious is that a lot of times, white people cannot see [the problems] as real, or not a big deal, or ‘Why should I worry about this? It doesn’t affect me.’”

Davis said that as a Black woman, she is discriminated against because she is seen by some as unequal because of the color of her skin.

“Right now, I have hope,” Davis said. “I have hope that things will change. I have a strong sense of being and empowerment. This time, I am seeing it is not only Black people who are tired, but it is all races of people of all ages being tired and speaking out, demanding equality and human rights.

“Allies should continue to speak out on behalf of unheard Black people and communities. Be intentional. Have uncomfortable conversations, surrounding race and white privilege, in the break room.”

Davis said she wants to thank everyone who has turned this group of four into such a moving, inspirational and impactful group.

“I know I speak for all of us when I say we are overwhelmed by the positive response this has had, both on us and our community,” she said. “We can hardly wait to see how much more this grows and evolves in the future.”