Pandemic seen adding to trend away from alcoholic drinks 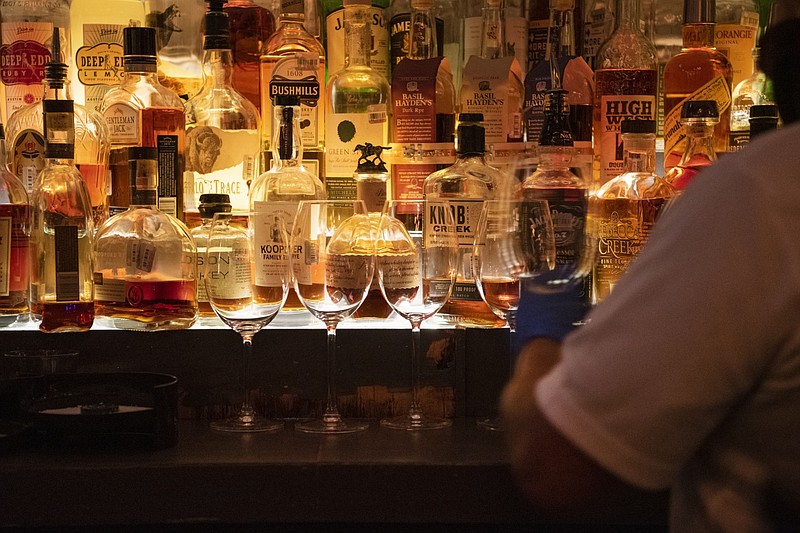 A bartender wearing gloves cleans glasses at a restaurant in Houston on May 27, 2020. MUST CREDIT: Bloomberg photo by Callaghan O'Hare.

During the coronavirus pandemic, people are drinking less.

While the masses are buying more alcohol from grocers and liquor stores to drink at home, that hasn't been enough to fill the gaping hole created by declines in shipments to restaurants, bars and sporting venues that were closed to slow spread of the virus.

Global alcohol consumption isn't expected to return to pre-covid-19 levels until 2024, and the recover in the U.S. will take even longer, according to researcher IWSR said.

This is especially troubling for brands in the U.S., where even before covid-19 a growing number of Americans, led by 20-somethings, increasingly worked to be healthier.

They aren't giving up all of the indulgences of older generations, but many want to feel better about doing so. It's a dynamic that helped turn lower-calorie hard seltzers, like White Claw, into household names and made non-alcoholic beer much more than an option for recovering alcoholics.

Toss in the growth of legal cannabis, and traditional beer, wine and spirits in the U.S. had been left searching for ways to bounce back. Now add an ongoing pandemic that's already killed 100,000 Americans, and there's increased concern that even when the virus fades consumers will keep cutting back on alcohol.

"The pandemic is set to cause a deeper and more long-lasting after-effect to the global drinks industry than anything we've experienced before," said Mark Meek, chief executive officer of IWSR Drinks Market Analysis, one of the leading authority's on the alcohol market. "In many ways, 2019 was perhaps the last 'normal' year for the drinks industry."

In the U.S., the craft brewing boom that lifted the beer industry for so many years has faded, leaving big brands like Bud Light and Corona chasing the White Claw phenomenon with their own offerings -- just another reason the ready-to-drink category keeps growing.

Meanwhile, non-alcoholic beer has continued to be a bright spot. It's still small at less than 2% of the U.S. beer market, but is forecast to grow by a third this year, according to IWSR. Those gains would come as volume in the overall beer category is expected to fall 3.7%, a fifth straight annual drop.

A lot of the gains can be credited to breweries founded on making non-alcoholic options with more taste -- many of the original non-alcoholic beers struggled to replicate essential beer flavors like hops and maltiness.

"You can have the amazing taste experience of an IPA, but it just doesn't have the alcohol in it," Jonathan Bennett, executive vice president for merchandising and supply chain for Total Wine, said earlier this year. Given the slowdown, "anything growing in beer takes our interest."

For years, Total Wine, the biggest alcohol-store chain in the U.S. with more than $3 billion in annual sales, saw customers gravitate toward healthier options with organic ingredients and fewer calories.

Then 2019's hard seltzer craze opened up the masses to low-calorie options, and when they looked they found more options than ever, including brewers who had figured out how to maintain flavor without alcohol. The retailer has doubled shelf space for non-alcoholic brews this year and added more displays to promote the category.

"If this is going to be the end of alcohol, we're going to be great at it," Bennett said with a chuckle.

Athletic Brewing Co., which makes only non-alcoholic beer, is seeing a boom in demand, with sales this year already surpassing all of 2019, according to CEO Bill Shufelt. And despite the pandemic, the company, based in Stratford, Conn., opened a brewery last month in California to help it expand to the West Coast and markets like Texas.

"It's an acceleration of a movement that was already in place" toward healthier lifestyles, Shufelt said. Sure, many Americans might have drank heavily early on during shelter-in-place orders, but "being hung over at home probably got old pretty fast."

Because a hangover is nearly impossible with non-alcoholic beer (any drink containing 0.5% alcohol by volume or less can be marketed as non-alcoholic), the category is in line to become the choice of those who live "active lifestyles," a subset of often wealthier Americans that marketers covet.

That demographic currently favors Michelob Ultra, which pioneered low-carbohydrate beer in 2002 at the height of the Atkins craze, and when that diet fizzled, morphed to winning over sporty folks with ads featuring loads of biceps and medicine balls.

For years, it's been one of the biggest hits at Anheuser-Busch InBev, the world's largest brewer. But it's a light lager that can still get a person drunk.

At WellBeing Brewing, another non-alcoholic beermaker, a golden wheat called Heavenly Body is pitched as "perfect" for after sports, even yoga. The company, based in Maryland Heights, Mo., calls its Victory Wheat a "sports brew" made with electrolytes, an ingredient found in Gatorade performance drinks. Athletic Brewing features surfers on its website and a 70-calorie offering – that's less than half a Bud -- called Run Wild.

Major players have been eager to jump in. Brooklyn Brewery, one of craft beer's pioneers, in October debuted Special Effects, a non-alcoholic option that touts "Do More of What You Love."

Heineken introducts its Heineken 0.0 to the U.S. last year. Molson Coors released non-alcoholic Coors Edge in the U.S. in November after a test in Canada. And late last year, Anheuser-Busch started rolling out Hoegaarden Soft Brew, which has flavors including rose and 0.5% alcohol, after becoming a hit in Europe.

And it's not just beer. Spirits with little or no alcohol are gaining fans. Diageo, owner of Smirnoff and Guinness, recently snatched up London-based startup Seedlip, the world's first distilled non-alcohol drink brand created in 2015. The brand has made its way across the globe including to the U.S. and late last year began popping up on menus at high-end restaurants.

There's a push into non-alcoholic wine, too, but the product has a long way to go, said Bennett, the Total Wine executive. That's why the retailer is working with wineries to develop an offering that "tastes like wine and not grape juice," he said.

The wine industry could use the help with volumes falling last year for the first time in a quarter- century.

Of course, this non-alcohol movement isn't for everyone. There are still plenty of drinkers, and a lot of them are stressed-out millennial parents in their prime spending years. This population, roughly 24-39 years old, drank 29 alcoholic drinks a month last year up from 24 in 2013, according to alcohol-producer Constellation Brands.

Count 30-year-old beer blogger Caitlin Johnson among the skeptics. "If I'm going to be spending my money and my calories, it would be nice to have something with a buzz," she said.

But a trip to Germany, Belgium and the Czech Republic last year opened her eyes when nearly every restaurant she visited in the iconic beer-making countries had a selection of non-alcoholic brews.