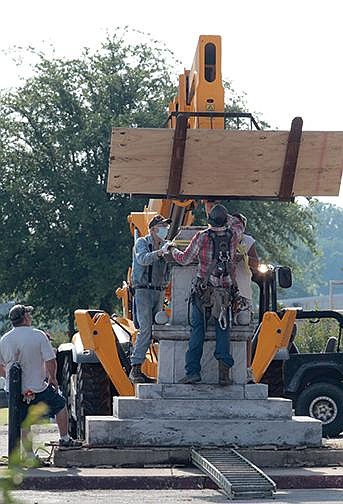 PINE BLUFF -- A memorial marker to the Confederacy that has sat on the north side of the Jefferson County Courthouse for more than 45 years abruptly came down the morning of June 20 as part of a cooperative agreement between County Judge Gerald Robinson and the United Daughters of the Confederacy, which owns the statue.

The night before, the sheriff's office placed a mobile remote surveillance tower in the courthouse parking lot to keep an eye on the statue at Robinson's request. The county executive said he had heard some chatter that someone might try to damage the statue overnight.

"I was told there were some threats on Facebook," Robinson said. "Nothing too specific, but I felt like we'd be better safe than sorry."

The next morning, a work crew removed the statue while volunteers guarded the entrances to the lot, not allowing anyone other than those authorized by Robinson to get close to the area while the statue was being taken down.

Although no word had been given publicly that it was to be removed, a few onlookers drifted through the parking lot on the west side of the courthouse, some taking photos and one man videoing from his pickup with a cellphone.

Just over a year ago, Robinson said he intended to move the statue from the courthouse, and said at the time that the statue was an inappropriate symbol for the county.

The statue moved back into the spotlight during a recent news conference by the Pine Bluff branch of the NAACP that was held in the shadow of the statue as members joined with the national NAACP in calling for federal legislation to provide for detailed procedures and penalties in cases of police brutality.

That news conference came about in the weeks after George Floyd, a 46-year-old black man in Minneapolis, died on May 25 while he was handcuffed and lying facedown in a street as a white police officer knelt on his neck for nearly 9 minutes. A video showed Floyd gasping for air, groaning the words "I can't breathe," and calling for his mother before falling silent and still.

Floyd's death roused worldwide protests against racial injustice and, in recent days, Confederate statues in Little Rock, Atlanta and more than 20 other places have been removed, some by local governments, and some torn down by protesters, according to The Washington Post.

Deelois Lawrence, a member of the David Owen Dodd chapter of the United Daughters of the Confederacy, said she and Robinson have been working to raise private funds to move the statue for over a year. Although not enough funding has been secured to move the statue to Camp White Sulfur Springs Confederate Cemetery, which is owned by the Confederacy group, she said a recent benefactor had made it possible to have the statue moved to an undisclosed location for storage where it can be cleaned and repaired.

"When we first talked to [Robinson] we told him that [the David Owen Dodd Chapter] are all ladies who grew up in Pine Bluff," she said. "We love Pine Bluff, and we don't want anything to happen to Pine Bluff that causes it to be in the same situation as some of these other towns are."

That benefactor, who was identified only as "Squirrel," and declined to give his real name, said he had raised funds to help move the statue in recent weeks, making arrangements with Lawrence and Robinson to have a monument company go to Jefferson County to do the work. Asked how he organized the effort, "Squirrel" equivocated.

As for moving the statue, Lawrence said she was happy that the statue will be preserved, and she hopes it will soon be restored and placed in its new home.

"He will be standing guard over dead soldiers who are buried there," Squirrel said.

Regardless of the intent, Davis said he is glad to see the statue gone.

"With Juneteenth being yesterday [June 19] and getting this news today," Davis said, "I can't think of a better day to have it moved."