Trump reportedly briefed on Russia effort to recruit Taliban by Compiled by Democrat-Gazette staff from wire reports | June 28, 2020 at 3:55 a.m. 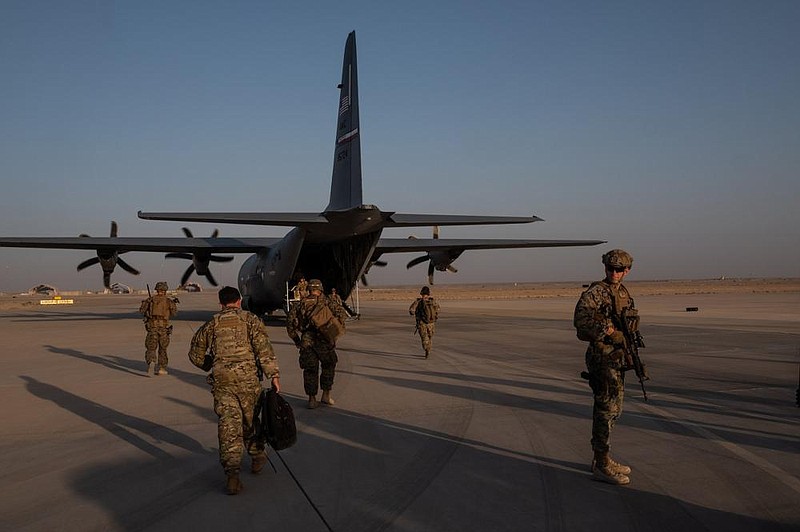 WASHINGTON -- American intelligence officials have concluded that a Russian military intelligence unit secretly offered bounties to Taliban-linked militants for killing coalition forces in Afghanistan -- including targeting American troops -- even as the peace talks to end the long-running war there were going on, according to officials briefed on the matter.

The United States concluded months ago that the Russian unit, which has been linked to assassination attempts and other covert operations in Europe intended to destabilize the West or take revenge on turncoats, had covertly offered rewards for successful attacks last year.

Islamist militants, or armed criminal elements closely associated with them, are believed to have collected some bounty money, the officials said. Twenty Americans were killed in combat in Afghanistan in 2019, but it was not clear which killings were under suspicion.

The intelligence finding was briefed to President Donald Trump, and the White House's National Security Council discussed the problem at an interagency meeting in late March, the officials said. Officials developed a menu of options -- starting with making a diplomatic complaint to Moscow and a demand that it stop, along with an escalating series of sanctions and other possible responses, but the White House has yet to authorize any step, the officials said.

The White House, however, denied that Trump had been briefed by intelligence officials but had done nothing to respond. The statement, released Saturday evening, came shortly after Joe Biden, the presumptive Democratic presidential nominee, slammed Trump for the alleged inaction.

"While the White House does not routinely comment on alleged intelligence or internal deliberations, the CIA Director, National Security Adviser, and the Chief of Staff can all confirm that neither the President nor the Vice President were briefed on the alleged Russian bounty intelligence," White House press secretary Kayleigh McEnany said in a statement.

McEnany said she wasn't commenting on the "merit of the alleged intelligence" on Russia's moves.

An operation to incentivize the killing of American and other NATO troops would be a significant and provocative escalation of what American and Afghan officials have said is Russian support for the Taliban, and it would be the first time the Russian spy unit was known to have orchestrated attacks on Western troops.

Any involvement with the Taliban that resulted in the deaths of American troops also would be a huge escalation of Russia's so-called hybrid war against the United States, a strategy of destabilizing adversaries through a combination of such tactics as cyberattacks, the spread of fake news, and covert and deniable military operations.

The Kremlin had not been made aware of the accusations, said Dmitry Peskov, press secretary for President Vladimir Putin of Russia.

Zabihullah Mujahid, a spokesman for the Taliban, denied that the insurgents have "any such relations with any intelligence agency" and called the report an attempt to defame them.

Spokespeople at the National Security Council, the Pentagon, the State Department and the CIA declined to comment.

The officials familiar with the intelligence did not explain the White House delay in deciding how to respond. While some of his closest advisers, like Secretary of State Mike Pompeo, have counseled more hawkish policies toward Russia, Trump has adopted an accommodating stance.

The officials spoke on condition of anonymity to describe the delicate intelligence and internal deliberations. They said the intelligence has been treated as a closely held secret, but the administration expanded briefings about it last week -- including providing information to the British government, whose forces are among those said to have been targeted.

The intelligence assessment is said to be based at least in part on interrogations of captured Afghan militants and criminals. The officials did not describe the mechanics of the Russian operation, such as how targets were picked or how money changed hands. It is also not clear whether Russian operatives had deployed in Afghanistan or met with their Taliban counterparts elsewhere.

Though coalition troops suffered a spate of combat casualties last summer and early fall, only a few have since been killed. Four Americans were killed in combat in early 2020, but the Taliban have not attacked U.S. positions since a February agreement.

American troops also have reduced their movement outside military bases because of the coronavirus, reducing their exposure to attack.

While officials were said to be confident about the intelligence that Russian operatives offered and paid bounties to Afghan militants for killing Americans, they have greater uncertainty about how high in the Russian government the covert operation was authorized and what its aim may be.

​​​​​Information for this article was contributed by Charlie Savage, Eric Schmitt and Michael Schwirtz of The New York Times; and by Jennifer Epstein and Ben Brody of Bloomberg News.