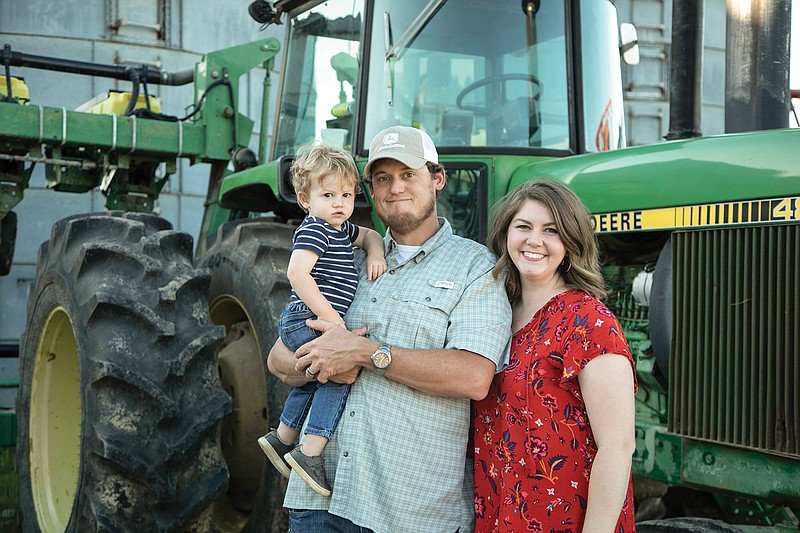 The Brad Peacock family of Bald Knob is the East Central District Farm Family of the Year. They competed as the White County Farm Family of the Year and were selected as one of eight district winners, who will now compete for the state title. The family includes Brad and Tara Peacock and their 1-year-old son, Silas. The couple grow soybeans and rice, along with corn, on 1,000 acres of leased land in White County.

Brad Peacock is carrying on the family tradition of farming.

The Peacocks will compete with the other seven district winners for the state honor, which will be announced in December.

“We’re a young farm family, and both White County and our district have many deserving producers who we respect greatly and have learned a lot from,” Brad said. “It’s an honor to be recognized, and we’re very grateful.”

Brad and Tara have a 1-year-old son, Silas.

Brad’s parents, R.J. and Paula Peacock, were the White County Farm Family of the Year in 2008.

“First, it is an honor to be named White County Farm Family of the Year,” said Brian Haller, White County Cooperative Extension Service agent and staff chairman. “To be named the East Central District Farm Family of the Year is even more so an honor. The East Central District includes Lee, Lonoke, Monroe, Prairie, Pulaski, St. Francis, White and Woodruff counties. These are all large agricultural counties with many great farm families. To be chosen from these counties is a big honor, considering the rich agricultural history of these counties.

“The Peacocks embody what you think of a farm family,” Haller said. “Brad comes from a history of farming. Brad and Tara not only work hard for their farm, but they are involved with the community also. The judges weigh heavily on the agricultural side, but also, the families’ involvement with community plays a role. Brad is on the White County Farm Bureau board, which helps to educate the public about the importance of agriculture. Tara is part of the White County Farm Bureau Women’s Committee. She is heavily involved with educating the public on agriculture through social media and hands-on teaching.

“So the Peacocks work hard on the farm and just as hard off the farm, telling the story of agriculture,” Haller said. “They are truly deserving of this honor.”

Brad graduated from Bald Knob High School in 2005 and from Arkansas Tech University in Russellville in 2009. He has one sister, Laura Story, who lives in Fayetteville. He is a grandson of Judy Peacock of Bald Knob and the late Charles Peacock and Oleta Kennedy of Fort Smith and the late Tony Kennedy. Charles Peacock was the third generation to farm in the Peacock family. The Peacock farm was named an Arkansas Century Farm in 2016.

“Farming has been in my [family’s] blood since the early 1900s,” Brad said. “I grew up on a farm, graduated from Arkansas Tech University with a bachelor’s degree in ag business, worked in the corporate side of farming for a short time, then made my way back to our farm to continue what I love and grow our business.

“My dad and I farmed around 2,000 acres,” he said. “Then I’ve picked up an additional 1,000 acres over the past eight years. We have rice, soybeans and have recently added corn.

“At 32 years old, I am one of the youngest farmers in our area,” Brad said, “My grandfather (Charles Peacock) taught me an important lesson when I was young, that you can learn something from anyone. I apply this every day as I watch not only my family, but also friends and neighbors invest their lives to provide food for the world. I’m proud to be a part of that.

“The outdoors is my office. I often see the sunrise, and I watch the sunset nearly every night. Sometimes I take that for granted, but being outside is where I was meant to be. This job isn’t something I have to do; it’s what I want to do.”

Tara is a daughter of Donna McFerran of Lavaca and Howard McFerran of Van Buren. She has one sister, Megan Johnson, who lives in Lavaca.

Tara graduated from Lavaca High in 2008 and from the University of Arkansas-Fort Smith, with a Bachelor of Science degree in graphic design in 2012. She is the art director at Think Idea Studio in Searcy and also serves as the account executive for Unity Health, Harding University and several other clients and nonprofit groups.

Tara recently served on the Think ART Project executive committee and was the artist for three murals that promote art and culture across the community. She is also a member of Healthy Women of Unity with the Unity Health Foundation.

“My parents and grandparents taught me what hard work is at a young age,” Tara said. “They also taught me creativity, ingenuity and persistence — all qualities that have come in handy as a farmer’s wife.

“Unlike Brad, I didn’t grow up on a farm,” she said. “I actually knew very little about it before we met, but I’ve learned a lot over the past 10 years. One of the things I enjoy now is helping educate others on simple farming principles and misconceptions.

“Our farming community is more than just a network,” Tara said. “It’s a family. I can’t think of a group of people who invest more time, energy and faith into their work. I’m proud to be part of that family.”

The Peacocks have worked closely with the University of Arkansas Cooperative Extension Service and the Natural Resources Conservation Service to continue to improve their crops. Brad said they have achieved several goals since they began farming on their own — they have adopted improved best-management practices, built grain bins to have more storage, upgraded equipment and planted more than 300 acres of cover crops, going into 2020, to help improve soil heath.

“I also want to become a landowner so I can grow crops on my own and receive a better profit,” Brad said, “then one day, pass the farm on to Silas, my son, to become the sixth generation in our family to farm, if he chooses.”

Brad said that in cooperation with the Cooperative Extension Service and Farm Bureau, “our farm has participated in a Crops for Kids Program for at least 15 years with the Bald Knob fifth- and sixth-grade students.

“The program teaches youth soil science, plant science, the importance of the rice industry, rice byproducts, budgeting and the economic side of farming,” he said. “Our farm gives the students an acre of rice, and they receive a check at the end of the year for the net income off that one acre. The students then get to decide, as a grade, which charity they want to donate the profit to, which teaches them to be charitable and give back to their community.

“We invite the students out to the farm in the spring after we plant, or in the fall during harvest. Many of these students have never been to a farm or seen farm equipment. When we started, most of the teachers didn’t know how rice was grown, and there are still many students who think their food just comes from a grocery store. It’s inspiring to see kids in our community learning about where their food comes from and taking an interest in agriculture.”

Brad and Tara are involved in numerous activities with the White County Farm Bureau and White County Cooperative Extension Service. They are active at New Life Church in Searcy.

Brad said their son, Silas, “is still just a little guy and marches to the beat of his own drum.” He attends God’s Little Blessings day care at Searcy First United Methodist Church.

“He loves playing on the farm and riding the tractor in the evenings,” Brad said. “He’ll grow up learning the importance of agriculture, firsthand, and will hopefully be able to take over our operation when he’s older, if he chooses.”