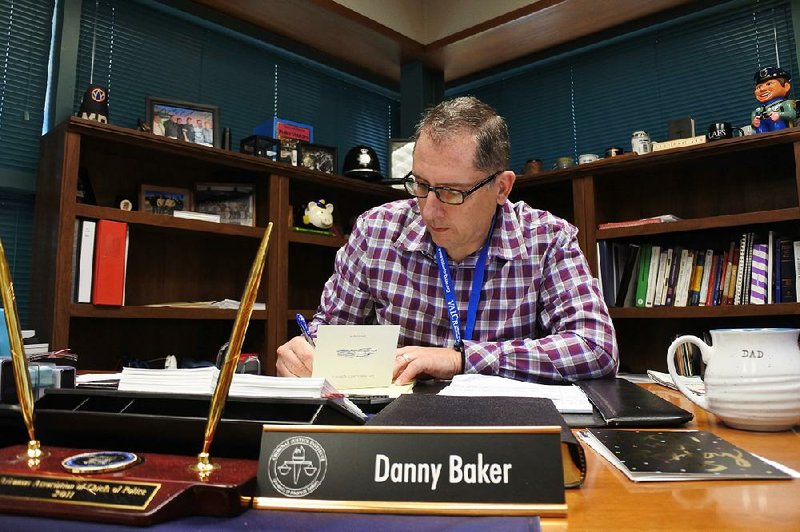 FORT SMITH -- Although the Fort Smith Police Department reported closing out 2019 at its most diverse, its chief has said there is still room for improvement.

Police Chief Danny Baker presented the department's 2019 annual report to the Fort Smith Board of Directors during a study session on Tuesday. City Administrator Carl Geffken announced Baker's appointment to the police chief position on Sept. 27. He was sworn in Oct. 11. Before that, Baker had served as interim police chief beginning April 8, 2019, after the previous chief, Nathaniel Clark, resigned that March.

Baker said he provided a "three-pronged approach" back in October for several goals that he wanted to accomplish at the Police Department. Those prongs, which are in keeping with the objectives Baker laid out in an Arkansas Democrat-Gazette article that same month, were organizational health and stability, building relationships and tearing down walls, and increasing the department's overall effectiveness. Baker said the department has made "tremendous headway" in all three.

One of the goals, pertaining to organizational health and stability, involved slowing down the number of officers who were retiring and leaving the department.

"We started the year with nearly 40 sworn vacancies," Baker said. "In the previous two years, we lost an average of 1.6 officers a month. We have been successful in cutting that in half by the end of 2019, with our turnover at 0.8 officers per month."

Another goal for Baker was to continue to fill the department's vacancies with qualified, diverse employees. The department hired 26 officers and nine civilians in 2019. Of those, six officers and seven civilians were from minority or female demographics, according to the report.

"We ended 2019 as the most diverse Police Department Fort Smith has ever seen, with more women and minority officers serving at one time than ever before that I'm aware of," Baker said.

However, Baker acknowledged that the department still has a "long, long, long way to go" in that regard.

"Currently, I have a full internal ... inquiry into our hiring and recruiting practices to identify some areas that we need to improve on, and I can assure you that we'll continue to work diligently to make sure that our Police Department is more representative of Fort Smith and the region," Baker said.

Baker also brought up the department in relation to the community when talking about building relationships and tearing down walls. He discussed shifting the culture of the department from one of a "warrior mindset" to one that is more of a guardian, with the department increasing police-community relations, among other actions.

"I've adopted a philosophy that community policing is a mindset," Baker said. "It's not a policy or program, and it's the responsibility of every officer in the FSPD to engage in community policing, building partnerships and meaningful relationships with those in our community who we serve. And it's the job of the community relations unit to seek out and encourage those opportunities."

One of these opportunities in 2019 was Operation Community First. Baker said this requires officers to have a minimum number of "non-enforcement" contacts each shift.

"If they get somebody's birthday or a Social Security number, or they go back and check for warrants, that is not a non-enforcement contact," Baker said. "And we track those, and that is now part of their annual performance evaluation as well."

The report described 2019 as a "banner year for the community relations unit."

"By year's end, the unit had attended or coordinated 242 events that were attended by 28,325 people, and as a result, department personnel were responsible for just over 10,000 personal contacts during the year," the report states.

In his own presentation concerning the annual report, Fort Smith police Lt. Don Cobb said the department is also heavily involved in social media, having several platforms. The report lists Facebook as the department's primary social media channel, with the department making 727 posts on the website in 2019. These posts had a reach of more than 13 million, with 20% engagement and more than 520,000 unique users.

"All told the department's social media presence had an engagement of almost 14 million, making the Fort Smith Police Department not just a local but national entity," the report states.

Another thing that Baker did in an attempt to improve the department's overall effectiveness last year was to increase the number of uniformed patrol officers on the streets by 10. He also reduced administration to 13 people, with six being civilians and seven, including Baker, being sworn officers.

"So my priority, our priority, is having as many officers on the street as possible and as few sitting around an office as possible," Baker said.