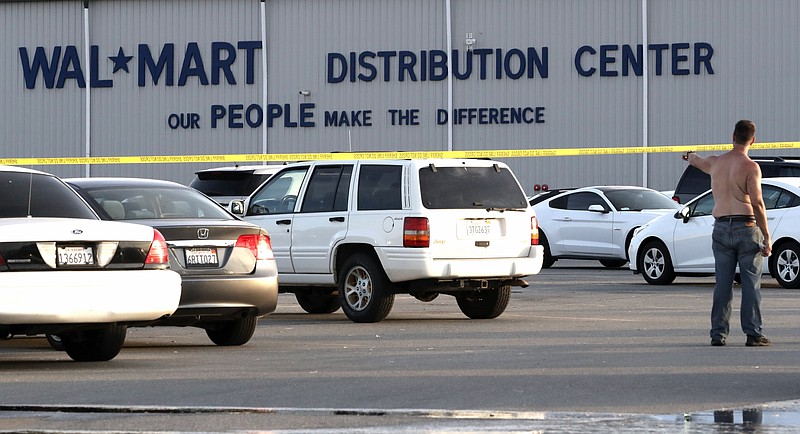 Crime tape blocks off a parking lot outside the Red Bluff, Calif., Walmart Distribution Center where the shooting’s suspect and an employee were killed Saturday and four others were injured. (AP/The Record Searchlight/Mike Chapman)

RED BLUFF, Calif -- A man who drove into a Walmart distribution center in Northern California and went on a shooting rampage that left him and another man dead, and four others wounded, was fired from his job at the center last year, authorities said.

The violence started Saturday afternoon when a man with a semi-automatic rifle circled the parking lot four times before crashing into the building and opening fire.

After the shooting, Lane engaged with Red Bluff police officers in the parking lot, where they exchanged 20 to 30 rounds, Johnston said. He was shot by police and pronounced dead at a hospital.

The employee who died was Martin Haro-Lozano, 45, of Orland, Calif. He was taken to the hospital by a sheriff's deputy due to the extent of his injuries, but later died, Johnston said. His relationship to the shooter was not immediately known.

The shooting victims were taken to St. Elizabeth Community Hospital and their injuries were not life-threatening, Johnston said. 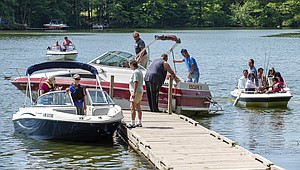 WASHINGTON -- Federal authorities have charged four men in connection with a failed effort last week to pull down the statue of President Andrew Jackson near the White House.

In a complaint unsealed Saturday, authorities allege that the men damaged and attempted to tear down the Jackson statue, which is located in Lafayette Square, last Monday. The square has been the site of protests in the aftermath of George Floyd's death while in police custody in Minneapolis.

Judd was arrested on Friday and appeared in Superior Court of the District of Columbia on Saturday, authorities said. The other three have not been apprehended. The FBI and the U.S. Park Police have been investigating the incident.

CHICAGO -- Activists and local leaders called for more state and federal support Sunday as weekend shootings across Chicago left three children dead, including a 10-year-old who was struck by a stray bullet that went through an apartment window.

The Saturday night death was among at least 10 shooting fatalities since Friday evening, which follow a deadly Father's Day weekend and fresh concerns about a violent summer ahead. A 1-year-old and 17-year-old were also killed.

"It's out of control where even innocent children are losing their lives," said neighborhood activist Raul Montes Jr., who planned a Sunday evening vigil on the city's southwest side.

He called for federal intervention while a state legislator announced a new task force to addressing underlying issues.

"Violence is a result of poverty, and must be addressed with human services and support," said state Rep. La Shawn Ford, a Chicago Democrat, in a statement. The group called on federal, state and city leaders for support.

A recent spate of shootings in Chicago and other cities have had authorities on edge. Experts say non-suicidal gun deaths are on track to top last year. The news comes as the American public is dealing with the stress of the coronavirus pandemic and economic fallout, more awareness of racial injustice and policing, and deeper political divisions in a presidential election year.

"We'll work with Congress on a plan if the ACA is struck down," Azar said on NBC's "Meet the Press." "We'll see what the Supreme Court rules."

"The entire ACA thus must fall" because of a tax law change made by the Republican-controlled Congress in 2017," the administration said in a brief filed late Thursday.

The court is likely to hear the case around the time of the election, but potentially not until after Americans cast their votes on Nov. 3.

That would leave voters in the dark about how their health care, typically ranked as among the most important issues, might change in 2021 and beyond. Trump and Azar have said repeatedly that any replacement would protect people with preexisting health conditions, without offering details.

Democrats rode the health care issue in the 2018 midterm elections to retake control of the House and they're planning to do it again in November.