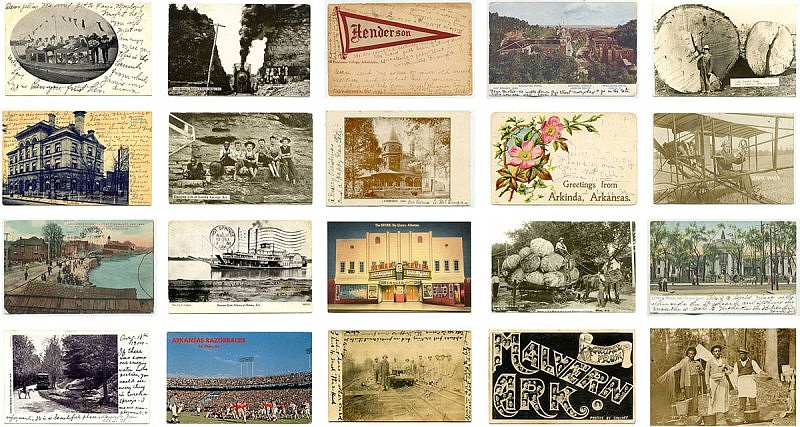 WHEN I LOG into Twitter, I’m prompted with a question at the top of my feed. What’s happening? it asks, prompting me to compose a tweet, to provide a status update so I can catch my family and friends up on what’s going on in my life or even just share what I’m thinking at any given moment. Facebook asks a similar question: What’s on your mind, Wyndham?

This practice of keeping others abreast of the news in our lives, a practice shared by billions the world over, isn’t necessarily a new one, though the standard method of doing so has certainly shifted and evolved over the years. The tweet was preceded by the text message. Before that, we had to actually make phone calls (oh, the horror) to update others on our lives or share what was on our minds. And before the invention of the telephone allowed for the immediacy of a dialogue available to the masses, there were telegrams and the granddaddy of all long-distance communication: good old-fashioned letter writing.

Letter writing has become a bit of a lost art, due largely to the aforementioned advances in communication technology, though there have been more than a few headlines recently about the resurgence of the practice, and the corresponding uptick in pen pals, as a result of COVID-19. But back in the early 1900s, when snail mail was the standard form of communication, the easiest way to post (see what I did there?) a quick status update to your folks was to jot it down on a postcard, slap on a stamp and drop it in the mail.

“There was no TV, no radio,” says author Ray Hanley. “Getting a postcard, it was a way to communicate with family and friends quickly. A lot of people saved them in photo albums, and they were valued by people, which is why, 110 years later, so many of them still exist.”

And if anyone knows postcards, it’s Ray Hanley. He's been collecting and studying postcards since the early '70s, with a personal collection now boasting some 35,000 vintage cards. He also literally wrote the book on Arkansas postcards with his brother Steven: Wish You Were Here: Arkansas Postcard Past 1900-1925, published by the University of Arkansas Press in 1997. And as if he needed more credibility, Ray has written the “Arkansas Postcard Past” column in the Arkansas Democrat-Gazette five days a week—for the past 34 years.

Initially, Ray was captivated by the images on the postcards he came across, the snapshots of a bygone time. But ultimately, his focus came to rest on the glimpses of daily life, not only reflected by the imagery, but of what people had scrawled on the reverse sides of the cards as well. The same kinds of scenes we get glimpses of through our friends’ social-media posts today—announcements about new houses, new babies, new jobs, birthday celebrations, academic accomplishments.

“I just landed a good job for the summer picking berries,” reads a note scrawled on a postcard from Judsonia in 1910. “I will be paid two cents per quart, and that means if I can pick fifty quarts, I will earn a dollar a day.”

On social media, we also often play witness to each other’s woes and pain: job loss, illness, financial misfortune. When looking through the messages found on early Arkansas postcards, it’s clear such woes have long been a harsh reality.

“Know you wonder why you don’t hear from me, but child, my hands are too full to write,” reads a note from El Dorado in 1911. “Amos had a spell of tonsillitis, Elizabeth has the measles, and Henry has been in bed for a week with neuralgia. Please write and tell me all the news, especially about the infantile paralysis.”

The more you sift through these dispatches and missives, as Ray has, a bigger picture starts to emerge, and the past becomes that much more tangible.

“You ended up with a chronology of everyday life, often a century or more ago, that was penciled and penned on the back of these postcards, and so much of what is on these images is long gone,” he says.

When it comes to those images, the subjects featured on many of the postcards coming out of Arkansas were reflections of the towns they originated from, Ray says. Postcards from small towns like Malvern or Dewitt, for example, often featured Main Street landmarks such as drugstores and churches. Those originating from resort areas like Hot Springs and Eureka Springs, on the other hand, were largely commercially produced and featured the towns’ luxurious bathhouses and hotels. Those from more rural areas of the state were usually the ones that depicted the scenes of daily life that really resonated with Ray—family picnics, baptisms, farm chores, newly built homes. The reason for this is because most of those postcards were custom printed for the families who took the photos.

“If photography was their hobby, the best way to share the photographs was to print them on postcard stock,” Ray says. “My own grandfather, who worked in the sawmill industry in the early 1900s in south Arkansas and northern Louisiana—he was an amateur photographer. And he took pictures of family members and put them on postcards. I still have some of those that we’ve actually published. [There’s one photo that shows] my grandmother standing with a horse on a farm in 1910 that he made and put onto a postcard.”

By contrast, imagery documenting more significant, large-scale events was also commonly found on Arkansas postcards, Ray says. “If there was a disaster, the photographer was out taking pictures and cranking out postcards sometimes the same day,” he explains. “The United Confederate Veterans Reunion, which Little Rock hosted in 1911—I mean, the best record of that, by far, is on postcards that the photographers did. You had 150,000 people in Little Rock at a time when the population was only 45,000. And a lot of those images—the old Confederate soldiers marching down Main Street and camped in the city park—were captured on postcards.”

When we commit something to paper or release it into the Twitterverse, those words are often personal, even if they’re entering into a very public forum. Did the people who wrote the postcards Ray publishes in his column each week ever dream that strangers might read them someday? Do we think future generations will look back at our tweets, our posts?

Postcards and social-media posts both seem to have a somewhat flimsy quality to them—postcards in a very literal sense, whereas social-media posts, even perfectly curated ones, all eventually get pushed down the feed and replaced by something else.

But even still, there's something else the two forms of communication hold in common, especially given the distance between us at this point in our history: They help to bring us a little closer together. And that’s something we all need right now.

What’s happening? What’s on your mind?

Want to print and mail a postcard of your own featuring Arkansas' gorgeous hometowns? Click here to download a printable PDF. 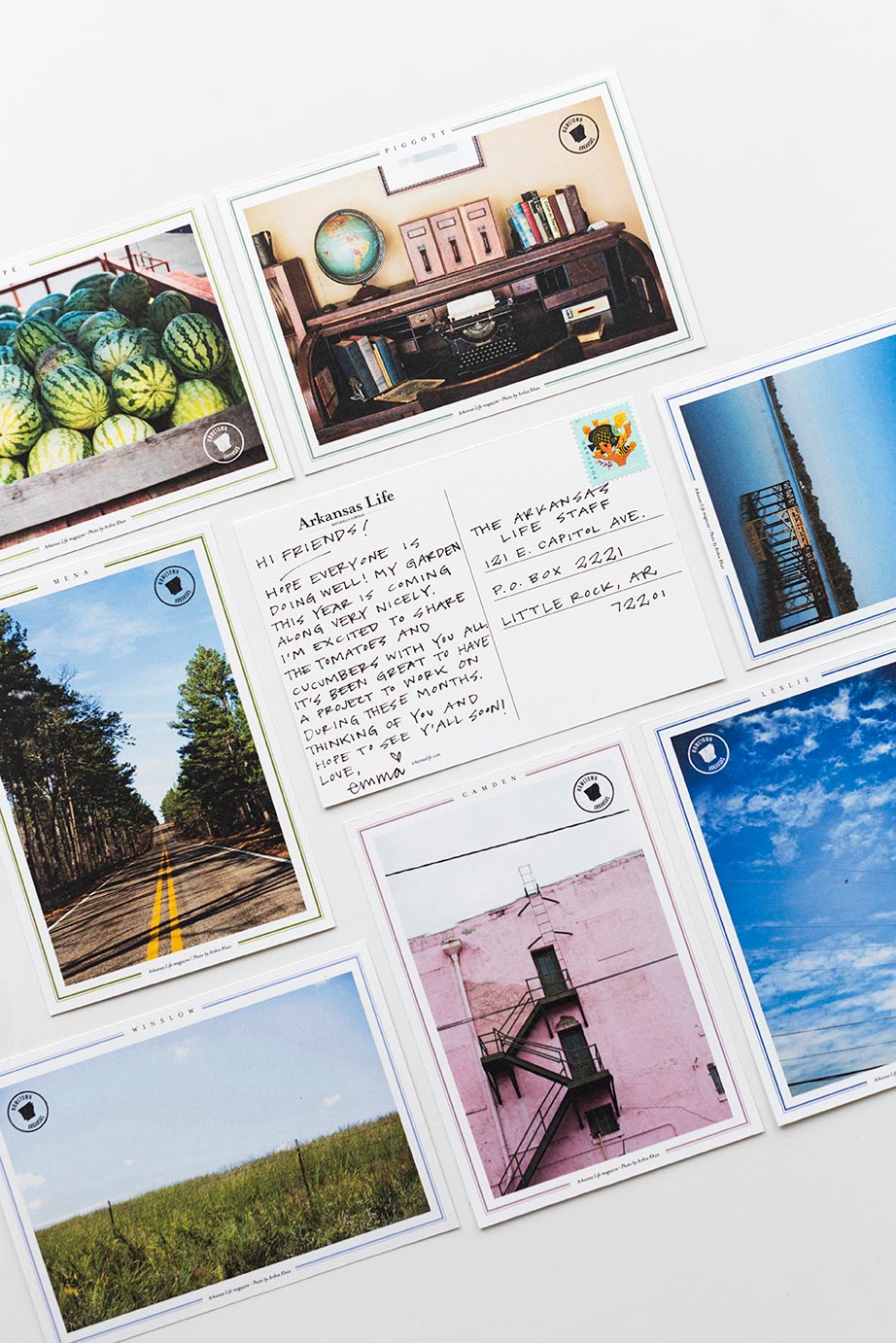