This Week in Arkansas Athletics 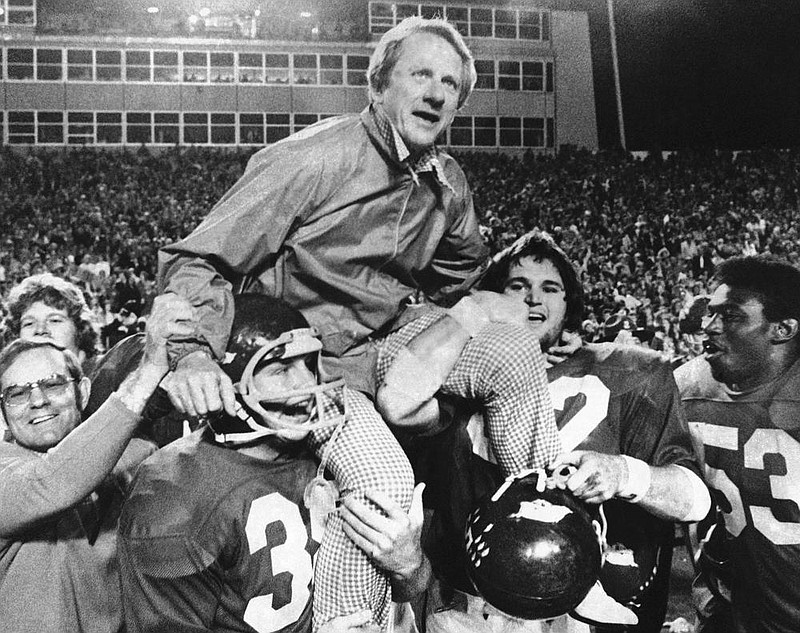 Stacy Lewis, an NCAA champion golfer at Arkansas, shot a final round 65 to win the LPGA Northwest Arkansas Championship by one stroke over Lydia Ko, Cristie Kerr and Angela Stanford.

The clinching 7-foot birdie putt by Lewis on the par-5 18th hole broke an 11-under tie with Ko and Kerr.

It was the first time Lewis won the LPGA event in Northwest Arkansas in front of the home crowd at Pinnacle Country Club in Rogers.

"I probably didn't have my best ball-striking day, but I found a way to get the ball in the hole," said Lewis, who earned $300,000 for the victory. "To make the putts like I did those last four holes was pretty unreal. The crowd, they were ready to go nuts, and when they did it was really cool."

Arkansas Coach Dave Van Horn confirmed that Razorbacks hitting coach Todd Butler had turned down an offer for the same position at Texas to remain at the UA.

Butler was an Arkansas assistant from 2006-13, then left for Wichita State, where he was the head coach from 2014-19 before being fired. He was a Missouri assistant coach last season and recently accepted an associate athletic director's job at McNeese State, where he played and was a head coach and assistant.

Cliff Lee, the former Razorbacks pitcher from Benton, beat the New York Yankees in Yankee Stadium again with a complete game in the Seattle Mariners' 7-4 victory.

Lee also beat the Yankees twice in New York during the previous year in the 2009 World Series when he pitched for the Philadelphia Phillies, and in the ballpark's opener for the Cleveland Indians in 2009.

Former Razorback Tyson Gay ran a wind-aided 9.68 seconds to win the 100 meters at the U.S. Olympic Trials in Eugene, Ore., to qualify for the Olympics in Beijing.

During the preliminaries, Gay ran 9.77 to set an American record.

Toronto rookie Eric Hinske, who played at Arkansas, hit a home run in the bottom of the 10th inning to lift the Blue Jays to a 5-4 victory over the Montreal Expos.

"It was amazing," Hinske said. "It was my first walk-off home run. All my family is in town too, so this is really cool."

Hinske -- whose family and friends came up from Menasha, Wis. -- went 3 for 5 as the Blue Jays came back from a 4-1 deficit in the ninth.

Hinske, acquired by Toronto in a trade with Oakland in the offseason, went on to be voted the America League Rookie of the Year. He finished the season with 24 home runs and 84 RBI. He played 12 seasons in MLB and is now an assistant coach with the Arizona Diamondbacks.

Clive Pullen, a junior at Arkansas, won the triple jump at the Jamaican Senior Championships in Kingston with a personal-best mark of 55 feet, 5½ inches, which qualified him for the 2016 Olympics in Rio de Janiero.

Chuck Barrett announced he would no longer be doing play-by-play for Arkansas baseball games on the radio after 23 seasons -- going back to 1992 -- to focus on calling football and men's basketball games for the Razorbacks, and hosting the coaches' television shows for those sports.

"It has been an honor and a privilege to broadcast Razorback Baseball for more than two decades," Barrett said in a news release. "I have enjoyed watching the Razorback baseball program grow from its early stages in the SEC to the national prominence it now enjoys. I am appreciative to Coach Norm DeBriyn, Coach Dave Van Horn, the hundreds of Razorback players and all those associated with Razorback Baseball who helped make the past 23 years so enjoyable."

The Arkansas athletic department began a five-year, all-sports deal with Nike -- including shoes and apparel -- after ending a contract with Adidas that ran the previous six years.

Arkansas and Nike reached an agreement in November 2009 when there was uncertainty about the UA continuing its affiliation with Adidas.

"We were fortunate that Nike wanted us," said Matt Trantham, Arkansas' senior associate athletic director for internal operations. "They wanted us pretty badly and in a tough economy, we were fortunate to get the Nike deal and for it to be what it was."

Financial details of Arkansas' agreement with Nike were redacted from a Freedom of Information Act request with the UA citing a "competitive advantage" exemption.

Wallace Spearmon, an NCAA champion sprinter for Arkansas, won the 200 meters at the U.S. Olympic Trials in Eugene, Ore., in 19.82 seconds to advance to the Olympics in London. It was Spearmon's third U.S. title in the 200.

Broyles stepped down as football coach after the 1976 season and remained as athletic director until the end of December 2007 when he retired.

Broyles also made the decision to promote John McDonnell to be the head track and field coach after he had been an assistant as well as the cross country head coach.

The Brooklyn Nets acquired All-Star guard Joe Johnson, a former Razorback from Little Rock, in a trade with the Atlanta Hawks.

"He has proven week after week over the past two seasons that he is one of the best pitchers in college baseball, and he is very deserving of this honor," Arkansas Coach Dave Van Horn said.

Lance Alworth, a star for the Razorbacks, retired from pro football after playing 11 seasons with the AFL's San Diego Chargers and NFL's Dallas Cowboys.

In 1978, Alworth became the first AFL player inducted into the Pro Football Hall of Fame. He played with the Chargers from 1962-70, then was traded to Dallas and played his final two seasons with the Cowboys.

Alworth finished his pro career with 542 receptions for 10,266 yards and 85 touchdowns.

Jarrion Lawson, a 19-time All-American at Arkansas, went a personal-best 28 feet, 13/4 inches to take second in the long jump at the U.S. Olympic Trials in Eugene, Ore. Lawson's previous best in the long jump had been 27-6½.

It was Boit's fourth Firecracker victory in the previous five years. He also won in 2006, 2007 and 2008. He finished second in 2009 to former Razorback Shawn Forrest.

"It stayed with me," Boit said. "I remembered last year and how Shawn just ran out away from me. I had some issues, but I knew I was going to come back and win again."

"There have been some sleepless nights trying to get this resolved," Smith said. "There comes a point in time where you say enough is enough, and I want it cleaned up and whatever we have to do, we have to do."

Smith did not reveal the full extent of his debts, but he told The Associated Press that his stake was in the multi-millions.

"It just got big," he said. "It was just a situation where we all made a little and said, 'Well, that's good. Let's see if we can make a little more.'

"At that point, the bank was willing to give away money. We got in over our head with land, and then the bubble burst and all this land value dropped and we couldn't sustain it."

The Razorbacks went 4-8 under Smith in 2012, and he was not retained as coach. He coached at two NCAA Division II programs, Fort Lewis in Colorado and Kentucky State, from 2013-18.

Lee pitched for Arkansas and Hunter was a Razorbacks signee from Pine Bluff, though he never played for the UA after being drafted by Minnesota and signing with the Twins.

Hunter said he was excited with the Angels hosting the All-Star Game.

"It'll be pretty cool to go out there on that line when they call my name and tip my hat to our fans and hear that energy of screaming."

Tyson Gay fell in the preliminaries of the 200 meters at the U.S. Olympic Trials after suffering a cramp in his left hamstring.

"It was just one of those things," Gay, a former Razorback, said in a statement released through USA Track and Field. "I'm very disappointed."

Gay already had qualified for the Olympics in Beijing with a victory in the 100, but he was among the favorites in the 200 as well.

Long and Kansas agreed on a five-year contract that will pay him $1.5 million annually. He was paid $625,000 in severance by Arkansas after his firing.

Long was fired on Nov. 15, 2017, when UA Chancellor Joseph Steinmetz said in a statement that Long had "lost the support of many of our fans, alumni, key supporters, and members of the university leadership."

Long had been Arkansas' athletic director since January 2008 when he replaced Frank Broyles.

Reggie Perry, a 6-8 forward and 5-star recruit from Thomasville, Ga., who had committed to Arkansas since the summer of 2016, announced that he was reopening his recruitment.

Perry ended up signing with Mississippi State -- where his father Al Perry played point guard -- and became an All-SEC player for the Bulldogs.

Perry has entered his name into the 2020 NBA Draft and signed with an agent, ending his college eligibility. 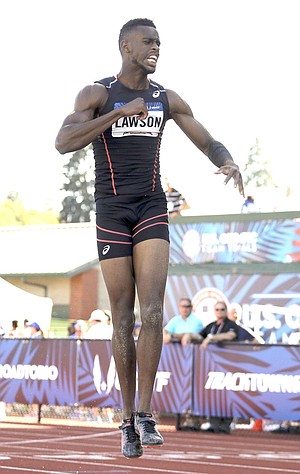 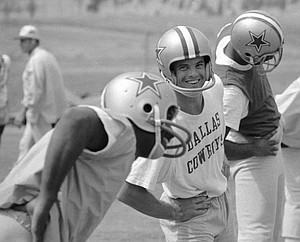 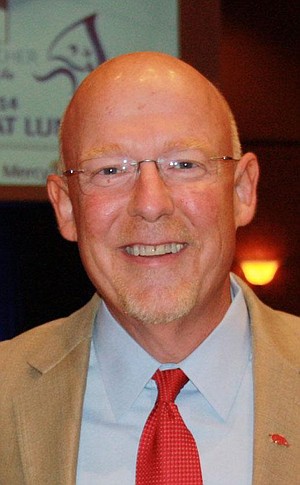 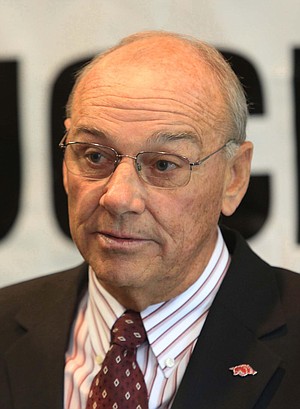 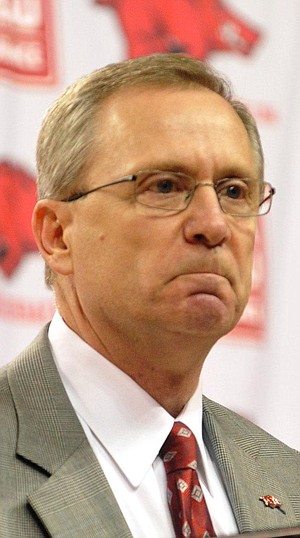