Trump: Not told of bounty reports

Call for answers a bipartisan one by Compiled by Democrat-Gazette Staff From Wire Reports | June 29, 2020 at 7:29 a.m. 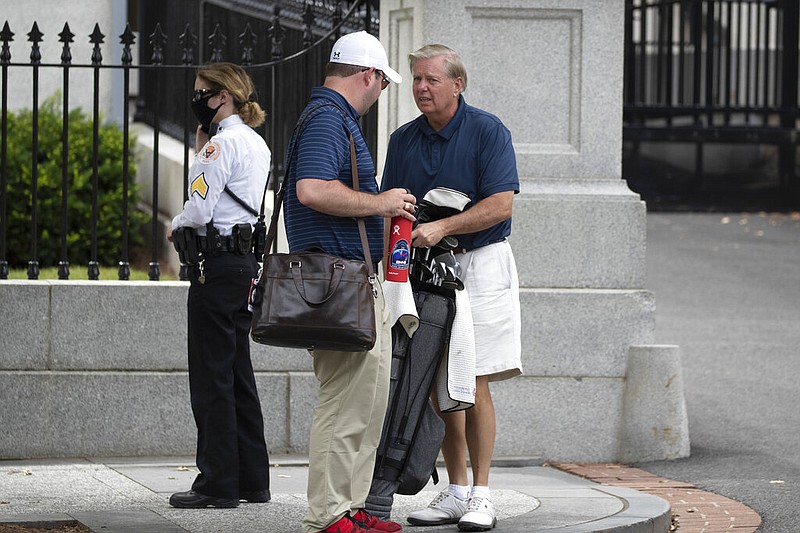 U.S. Sen. Lindsey Graham (right), R-S.C., grabs his golf bag upon returning to the White House in Washington on Sunday, June 28, 2020, from Trump National Golf Club in Virginia, where he golfed with President Donald Trump. Graham said Saturday that it was “imperative Congress get to the bottom of” the story that a Russian military intelligence unit secretly offered bounties to Taliban-linked militants for killing American troops in Afghanistan. (AP / Alex Brandon )

WASHINGTON -- President Donald Trump on Sunday denied that he had been briefed on reported U.S. intelligence that a Russian military intelligence unit secretly offered bounties to Taliban-linked militants for killing American troops in Afghanistan, and he appeared to minimize the allegations against Moscow.

But along with top Democrats, Republican lawmakers demanded further answers from the White House.

American intelligence officials concluded months ago that Russian officials offered rewards for successful attacks on American service members last year, at a time when the U.S. and Taliban were holding talks to end the long-running war, according to The New York Times.

[Video not showing up above? Click here to watch » https://www.youtube.com/watch?v=LeJes_mfXcw]

Trump, in a Sunday morning tweet, said "Nobody briefed or told me" or Vice President Mike Pence or Chief of Staff Mark Meadows about "the so-called attacks on our troops in Afghanistan by Russians."

"Everybody is denying it & there have not been many attacks on us," he said.

The White House had issued a statement Saturday denying that Trump or Pence had been briefed on such intelligence. "This does not speak to the merit of the alleged intelligence but to the inaccuracy of the New York Times story erroneously suggesting that President Trump was briefed on this matter," press secretary Kayleigh McEnany said.

Trump's director of national intelligence, John Ratcliffe, also said neither the president nor vice president was "ever briefed on any intelligence alleged" in the Times' report, and he said the White House statement was "accurate."

Trump's tweet came a day after presumptive Democratic presidential nominee Joe Biden said the report, if accurate, was a "truly shocking revelation" about the commander in chief and his failure to protect U.S. troops in Afghanistan and stand up to Russia.

House Speaker Nancy Pelosi, a member of the "Gang of Eight" congressional leaders briefed on sensitive intelligence matters, Sunday told ABC's "This Week" that she had not been informed about the reported bounties and requested a report to Congress on the matter.

"This is as bad as it gets, and yet the president will not confront the Russians on this score, denies being briefed. Whether he is or not, his administration knows and our allies -- some of our allies who work with us in Afghanistan had been briefed and accept this report," she said.

"This unsophisticated plant clearly illustrates the low intellectual abilities of the propagandists of American intelligence, who instead of inventing something more plausible have to make up this nonsense," the Russian Foreign Ministry said.

A Taliban spokesman said the militants "strongly reject this allegation" and are not "indebted to the beneficence of any intelligence organ or foreign country."

The Times, citing unnamed officials familiar with the intelligence, said the findings were presented to Trump and discussed by his National Security Council in late March. Officials developed potential responses, starting with a diplomatic complaint to Russia, but the White House has yet to authorize any step, the report said.

The officials briefed on the matter said the intelligence assessment was based at least in part on interrogations of captured Afghan militants and criminals. The officials said the assessment had been treated as a closely held secret but that the administration expanded briefings about it over the past week -- including sharing information with the British government.

Rep. Liz Cheney of Wyoming, the third-ranking Republican in the House, on Sunday appeared to accept Trump's comments as true. But in a tweet she called for an explanation of "who did know and when," and asked if the topic had been raised in the president's daily brief.

A key Trump ally, Republican Sen. Lindsey Graham of South Carolina, said Saturday that it was "imperative Congress get to the bottom of" the story.

"I expect the Trump administration to take such allegations seriously and inform Congress immediately as to the reliability of these news reports," he said on Twitter. Graham golfed with Trump on Sunday in Virginia.

Democratic Sen. Tim Kaine of Virginia on Sunday questioned Trump's continued friendly relationship with Russian leader Vladimir Putin, including his call for him to attend the next G-7 meeting, "all while his administration reportedly knew Russia was trying to kill U.S. troops in Afghanistan."

"Not only has he failed to sanction or impose any kind of consequences on Russia for this egregious violation of international law, Donald Trump has continued his embarrassing campaign of deference and debasing himself before Vladimir Putin," Biden said in a virtual town hall event.

Trump responded to Biden on Twitter, saying "Russia ate his and Obama's lunch during their time in office."

But it was the Obama administration, along with international allies, that suspended Russia from the Group of Eight after its unilateral annexation of Crimea from Ukraine -- a move that drew widespread condemnation.

Trump tweeted that "Nobody's been tougher" on Russia than his administration.

It's "remarkable" that Trump is energetically denying that he knew of the intelligence reports, former national security adviser John Bolton said Sunday.

"It is pretty remarkable the president's going out of his way to say he hasn't heard anything about it; one asks, why would he do something like that?" Bolton said.

"He can disown everything if no one ever told him about it," Bolton said Sunday on NBC's "Meet the Press." "It looks like just another day in the office at the Trump White House."

Bolton said he didn't know the quality of the intelligence on the Russian bounty plan, or the extent of it. And not all information that flows through the many U.S. intelligence agencies is passed on to the commander in chief, Bolton noted.

[Video not showing up above? Click here to watch » https://www.youtube.com/watch?v=WuQWknk-ekM]

"There needs to be a filter of intelligence for any president, especially for this president," he said.

However, "Active Russian aggression like that against American servicemen is a very, very serious matter," Bolton added.

Asked why Trump is often defensive of Putin, Bolton said he didn't read anything into it necessarily. "I just don't know what to say other than if he likes dealing with strong authoritarian figures."

​​​​​Information for this article was contributed by Lynn Berry and Zeke Miller of The Associated Press; by Eric Schmitt, Michael Schwirtz and Charlie Savage of The New York Times; and by Ros Krasny and Ben Brody of Bloomberg News. 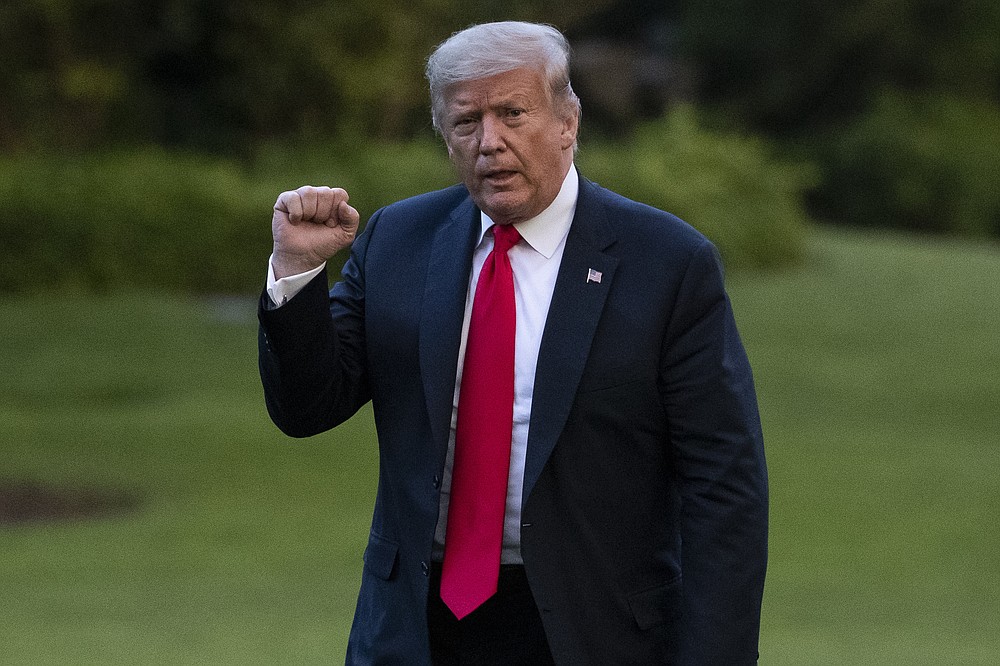 President Donald Trump pumps his fist as he walks on the South Lawn after arriving on Marine One at the White House, Thursday, June 25, 2020, in Washington. Trump is returning from Wisconsin. (AP Photo/Alex Brandon)
ADVERTISEMENT