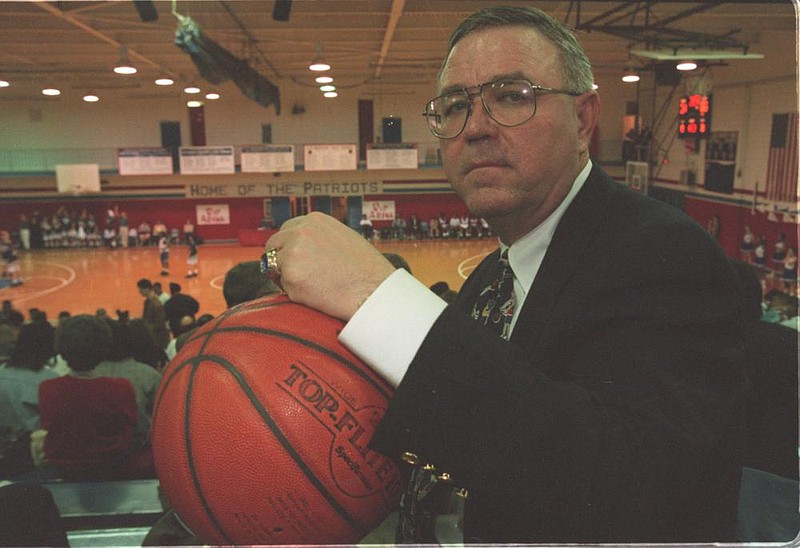 Former Little Rock Parkview boys basketball Coach Charles Ripley, who died Sunday at age 74, was known for guiding his players to success on and off the court during his 23 years with the Patriots, whom he built into a national power. (Arkansas Democrat Gazette file photo)

Charles Ripley did just as much teaching off the basketball court as he did on it, and for those who knew the former Little Rock Parkview coach, that concept isn't hard to believe.

A conversation with any of his past players, assistants or colleagues in the profession ultimately will point to Ripley's humanitarian efforts and benevolent ways before any dialogue shifts to the coaching exploits that helped put him into the Arkansas Sports Hall of Fame in 2006.

"There's so much about Coach Rip that sets him apart," said Yancy Hooks, who played under Ripley from 1988-90. "The things he did for us went beyond basketball. Everything he did gave us structure, not just for sports, but for life in general.

"Playing for him was kind of like playing for a college. But for somebody, from my understanding, like Rip who never played the game, I've never known anyone that was able to teach the game the way he taught the game. His lessons were more than just about basketball, whether some people knew it at the time or not."

But it was what Ripley accomplished as a sideline guru at Parkview that allowed him to reach iconic status around the state.

The 74-year-old, who'd been battling cancer for some time, died Sunday in Little Rock. As news began to spread about Ripley's passing, tributes on social media sites began to pour in from throughout Arkansas for a man who turned a chameleon-like program into one that became the standard for high school basketball excellence.

Ripley became the Patriots head coach in 1974 and didn't relinquish that title until he stepped down to accept that same role at Westark Community College (now the University of Arkansas at Fort Smith) in 1995. But his legacy on the prep level was secured long before he made that move to the western part of the state.

"He was truly something special, man," said Al Flanigan, who was Ripley's assistant before taking over after he left for Westark. "I thank God for Rip. I learned a lot from that man, and I've always have a tremendous amount of respect for him."

Prior to Ripley's arrival at Parkview, the Patriots were struggling to find their footing, which may have been surprising considering they were two years removed from winning back-to-back state championships in 1971 and 1972. A down cycle of talent also may have contributed to Parkview's slippage, but Ripley made sure the Patriots wouldn't dip any further.

Parkview reascended as soon as he took over. Little did he or anyone else know it'd be the start of a two-decade run that few others at the time could rival in the state.

Along the way, Ripley helped put Parkview on the national scene. The Patriots were invited to numerous tournaments around the country and garnered rankings nationally. The 1995 team, Ripley's last, went 35-1 and finished in the top five of two national polls, with its only loss coming to Los Angeles Fremont in overtime of the Las Vegas Holiday Prep Classic. That season, five of Parkview's seniors signed to play NCAA Division I scholarships, one of whom was forced to miss that tournament title game. The Patriots coasted to a state championship months later, and Ripley closed the door on his time at the school when he was hired to replace Bobby Vint at Westark.

But the blueprint for success had already been laid, and there was one person whom Ripley believed could sustain what he built at Parkview.

"He's the reason I was at Parkview," said Flanigan. "He was a giver, and he gave me my first opportunity to come over, learn under him and get better. He gave me a chance.

"Without Coach Rip, there would be no Coach Flanigan."

Flanigan, who won 12 conference titles and 7 state championships in his 23 years as head coach, noted that he and Ripley had a "special" relationship that started as soon as he joined the Patriots' coaching staff in 1989.

"His heart was as big as Ripley Arena," Flanigan explained, referring to the Patriots' home gymnasium. "The thing about Rip is that he treated all of his players like they were his own, and he treated me the exact same way. He was going to always support you and be there for you no matter what.

"We talked all the time, and when I would go see him, I would always try to keep him fired up about the days when it was us against the world, me and him. Those conversations would always bring a smile to his face."

When Flanigan decided to retire last summer, the district hired Scotty Thurman as his replacement. The Louisiana native and former University of Arkansas standout didn't play on any of Ripley's teams, but he didn't revere him any less.

"I remember meeting him when I was like 15 or 16 years old, back when the old Arkansas Wings were around during AAU," he said. "He was around that group quite a bit. I remember just having general conversations with him back then. No matter if it was at the lunch table or while walking around the coliseum when events were held at Arkansas State.

"To see how many people would run up to him ... that's when I started to realize how truly iconic he was. So many people put value on how many games you win, but I think with him, the value should be on how many lives he touched."

Count Hooks among that group. He never won a state title as a player at Parkview, but he had a front-row view of Ripley's numerous acts of compassion toward everyone regardless of their background.

"Considering the climate that we live in right now, Coach Rip didn't see color," he said. "If we didn't have a way to get to practice, he'd round us all up. However many people he had to pick up, he would pick them up to make sure they were at practice. If we didn't have shoes, or for some, clothes, he would furnish that for us. We had a running account at Andy's Restaurant, which at the time was on John Barrow Road.

"Sometimes if we were hungry, we could go down there and get something to eat. He fed us, clothed us, just took care of us. He didn't have any children, but figuratively, he had a lot of kids he loved. And they loved him just as much."

Those same kids went out and won more times than not for Ripley. For Thurman and the legion of coaches who've offered condolences since Ripley's passing, that notion won't be lost.

"The success he had on the floor came along with the difference he made in people's lives," Thurman said. "With 5 state titles, nearly 500 wins, playing in state championship games in 10 of his last 12 years as a coach ... those kind of numbers in today's times are unheard of. But he did it all with a surrogate heart, and that's what sticks out."